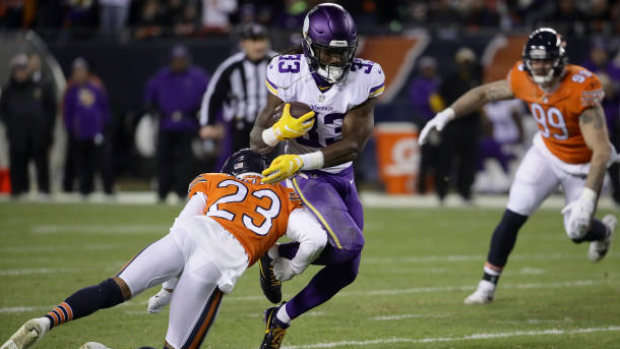 It will be an NFC North slugfest on Monday Night Football on TSN as the Minnesota Vikings (3-5) travel to the Windy City to clash with the division rival Chicago Bears (5-4).

Minnesota is coming off back-to-back wins, including an upset victory over the division-leading Green Bay Packers. Meanwhile, Chicago is looking to snap a three-game losing streak.

This game opened with the Vikings favoured by 2.5 on the road, but that line has since moved further in their favour.

Minnesota is now a 3.5-point favourite, in a game that features a low total of 43.5.

The Vikings offence is built around star running back Dalvin Cook.

Cook ranks second in the NFL in rushing yards, despite playing two fewer contests than most of his competitors.

He’s averaging 6.0 yards per attempt and has already hit pay dirt a league leading 12 times on the ground.

Brought the shades back out 😎 pic.twitter.com/oIfkQpFZd7

He’s also racked up 369 rushing yards and five touchdowns over his past two outings, while also contributing 109 yards and a score in the passing game.

Cook’s absurd production has taken the pressure off quarterback Kirk Cousins, who’s thrown the ball just 34 times over his past two games.

You can bet the Bears will sell out to stop the run and force Cousins to beat them, a strategy they’ve deployed over the past few weeks.

Since joining Minnesota in 2018, Cousins is 0-3 versus Chicago and has led the Vikings to point totals of just 6, 10, and 20 in those games. He’s averaged just 5.4 yards per attempt against the Bears and has as many turnovers (3) as touchdowns.

Cousins is also 0-9 in his career on Monday Night Football.

Considering just one of the nine quarterbacks the Bears have faced in 2020 has finished higher than a top-19 performer for the week, Cousins will be in tough in this one.

It doesn’t help that his top target Adam Thielen has also struggled historically against the Bears, posting just 12 total catches for 110 yards over his past three games versus Chicago.

Chicago’s Passing Game in Plus Spot

With lead running back David Montgomery out due to a concussion, we can expect a more pass-heavy approach from the Bears.

That should set up well versus the Vikings, who have allowed the third-most passing yards per game, and 19 touchdowns through the air.

Only three other teams have surrendered more 20-plus yard completions than Minnesota, and both Allen Robinson and Darnell Mooney have excellent matchups if Nick Foles can get them the ball.

Robinson in particular could excel, and is a great bet to experience some positive touchdown regression. A-Rob has found the end zone just once since Week 4, despite seeing an average of nine targets per game.

In two meetings with the Vikings last season, he ran circles around the Minnesota secondary, racking up 16 catches for 148 yards.

Catching 3.5 points with the home team in a divisional battle is too good a spot to pass up here. Yes, the Bears offence has struggled this season, averaging 19.8 points per game, but only five teams have allowed more points per outing than the Vikings.

It’s ridiculous to assume that Chicago can completely neutralize Cook, but if they can slow him down and force Cousins to beat them, they’ll have a great chance to not only cover but win outright.

Fantasy owners scrambling to find a bye week fill-in at the receiver position should give Mooney a long look.

The rookie out of Tulane is fresh off a career-high 11-target game, and has the speed to torch this suspect Minnesota secondary.

Mooney has been routinely getting behind opposing defences all season.

If not for poor quarterback play from Foles and Mitchell Trubisky, he would be making headlines week in and week out.

As mentioned, the Vikings have been giving up big plays at an alarming rate, and no Bears player is more likely to bust a long touchdown than Mooney.