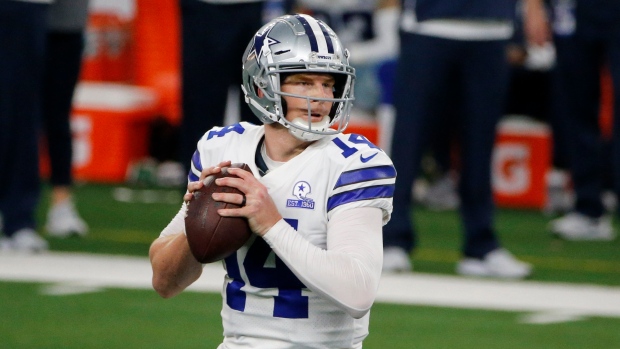 The Andy Dalton era in Dallas will officially begin on TSN tonight when the 2-3 Cowboys host the 3-2 Arizona Cardinals.

The Cardinals opened as a 2.5-point road favourite, but that line has since moved slightly in favour of the Cowboys.

Arizona is 3-2 against the spread this season, while Dallas is one of only two teams that have yet to cover so far in 2020.

Dalton can excel in this offence

Not many people want to admit it, but Dalton can still play.

In terms of backup quarterbacks, there’s not many with a resume that rivals his, and he proved his worth immediately against the Giants.

ANDY DALTON LEADS THE COWBOYS TO VICTORY IN THE FINAL MINUTE 💯

He completed 9-of-12 passes for 111 yards in relief, making a pair of phenomenal throws to set up the game-winning field goal.

Dalton has multiple 4,000-yard, 25-TD seasons under his belt, and he’s never had a supporting that boasts this much talent.

Amari Cooper, CeeDee Lamb, Ezekiel Elliot and Michael Gallup in the same receiving group sounds like a Pro Bowl roster and one that Dalton will absolutely excel with.

And now the reality of football sets in.

This is why they signed Andy Dalton, and now we're really going to see what the future holds for him in 2021 and beyond. There aren't many backup QBs in the league who give you a true chance to compete, and Dallas has one of them.

Also working in his favour on Monday Night is the fact that the Cards will be minus top pass rusher Chandler Jones.

The Dallas defence is still a mess

On the other side of the ball, the Cowboys defence has been a wreck.

They’re fresh off surrendering 34 points to the lowest-scoring offence in the league, and they have allowed 11 touchdowns to opposing quarterbacks since Week 2.

The Dallas defence ranks 30th against the run, 32nd against the pass and has allowed an NFL-worst 36 points per game this season.

Murray has a storied history at AT&T Stadium, winning each of the six times that he’s played there in high school and college.

The Cowboys have allowed at least 100 receiving yards or two touchdowns to every No. 1 receiver they’ve faced so far, and don’t have a single defensive back who can hang with Hopkins.

The lookahead line for this game was Cowboys -3.5 prior to Dak Prescott’s season-ending injury, and the market may be guilty of an overreaction here.

The drop-off from Prescott to Dalton isn’t as severe as the initial line move suggests, and even though the number now is closer to where it should be, there’s still some value on the underdog.

With a Pro Bowl-calibre roster at his disposal, Dalton will certainly put up points.

It’s just a matter of whether or not the defence can hold the opposition under 30 for the first time since Week 1.

As mentioned, the Dallas offence will still produce with Dalton at the helm, and that includes standout rookie CeeDee Lamb.

The rookie has at least five receptions in every game this season and we know from watching Dalton in the past that he loves peppering his slot receiver with targets.

Lamb leads Dallas in receiving yards, and has seen 34 passes thrown his way since Week 2.

All of these factors point towards a much bigger game from Lamb than oddsmakers currently expect.