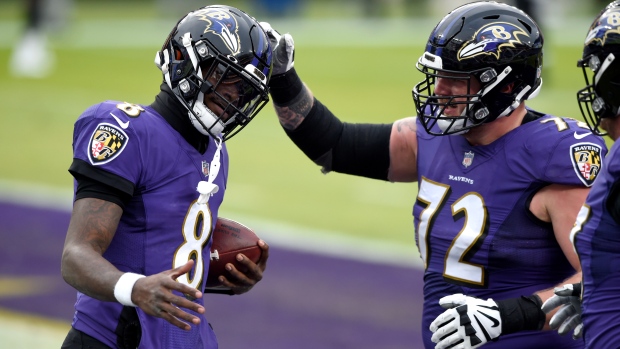 Week 5 in the NFL concludes on Monday Night Football live on TSN as the Indianapolis Colts visit the Baltimore Ravens.

Baltimore has reeled off three straight wins since dropping its season opener, and sits atop the AFC North standings.

Meanwhile, Indianapolis is off to its worst start in the Frank Reich era, posting a 1-3 mark. The Colts got their first win of the season in Week 4, but that came against a shorthanded Miami squad.

The Ravens opened as a 6.5-point favourite, but the line has moved slightly in Baltimore’s favor. It now sits at Ravens -7, with 81 per cent of the ATS handle on Baltimore.

The Baltimore conversation begins and ends with Lamar Jackson.

The 2019 MVP is off to another strong start, posting 1,077 passing yards and 4 touchdowns, while chipping in a team high 279 rushing yards and two additional scores on the ground.

Jackson is fresh off a 316-yard passing day in a victory over the Denver Broncos, and has racked up over 600 yards through the air in his past two starts. He’s averaging 8.7 yards per attempt this season, the highest of his career, and has thrown for at least 235 yards in all four starts.

Lamar Jackson is the first QB in #NFL history to throw for 1,000 yards and rush for 250 yards in the first 4 games of a season.

Jackson is on pace for 4,577 passing yards and 1,186 rushing yards. #Ravens #RavensFlock pic.twitter.com/tGiznyEma1

Jackson is set to face an unimposing matchup against the Colts D on Monday night, which ranks 21st by DVOA, and has surrendered at least 25 points in three of four games.

Indy has allowed the sixth most yards per pass attempt to enemy QB’s, and has yielded at least two touchdown passes to every quarterback they’ve faced. They play a strictly zone scheme, designed to keep everything in front of them, that helps limit their vulnerability to rushing QB’s like Jackson.

For that reason, Jackson’s passing props are more enticing than his rushing props on Monday, especially overs on his yards (223.5) and TD (1.5).

The only thing Hollywood dropped was the 🎤

His No. 1 target Marquise Brown is also set up for success, as the Colts have already coughed up big games to Tyler Lockett, Cooper Kupp and Devante Parker, while Brown has at least 69 yards and a touchdown in three of four outings this season.

The Colts enter Monday night ranked 26th in offensive DVOA, and 31st in total yards. Carson Wentz is still nursing injuries to both ankles, while his two top offensive linemen (Quenton Nelson and Braden Smith) are sidelined with injuries.

That spells trouble against a Ravens defence that generates the highest pressure rate (47%) of any team in the league.

In their last 3 games, the #RavensFlock defense has been disruptive, allowing 3rd down conv. at a 23.3% rate (2nd in NFL). Here, @GregCosell dissects Don Martindale's scheme w/ disguised Zone Blitz against the @Lions in Week 3.#OnePride | #NFL | @MattBowen41 pic.twitter.com/3RDATOwUxH

The Colts began the week ranked dead last in pass blocking per Pro Football Focus, while Wentz is completing only 54.4 per cent of his passes under duress.

The Ravens held the Broncos QB’s to 148 yards on 37 attempts last week, racking up five sacks and an interception along the way.

Baltimore checks in as the 12th best defence per DVOA, and has held each of its past two opponents below 20 points.

If forced to choose a side against the spread, I’d lean the Ravens, but I actually prefer Baltimore as a teaser piece with Tampa Bay (against Philadelphia) on Thursday Night.

For those looking to roll with the Ravens, there are quite a few trends to support that pick. Home teams are 4-0 ATS on Monday Night Football so far in 2021, while Baltimore has covered in each of its past three home games as a favourite.