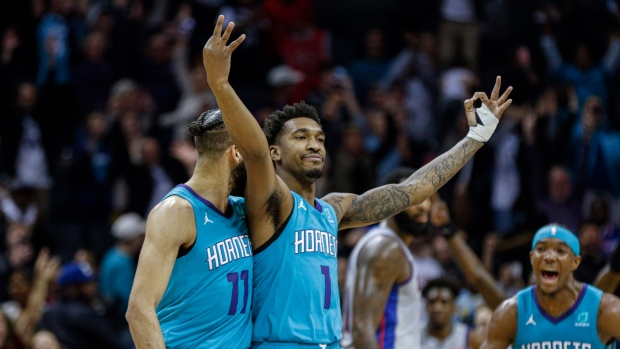 Monk knocked down a 3-pointer at the buzzer to give the Charlotte Hornets a 109-106 victory over the Detroit Pistons on Friday night, helping snap a four-game losing streak.

“Every game is getting better and better, so hopefully I just keep going up,” said Monk, who finished with 19 points on 8-of-12 shooting. “I’ve been working hard for these two or three years and I’ve been waiting for my moment.”

It came after Pistons point guard Derrick Rose drove the lane and threw the ball away with a second left. Monk, who was the third option on the inbounds play from midcourt, came flying around a screen, caught the pass from Cody Martin and buried the jumper with a smooth stroke.

Devonte Graham, who had 18 points and 10 assists in his second start, said Monk asked coach James Borrego in the huddle to run a play for him.

That didn’t surprise Borrego, who has seen Monk’s confidence grow as the season has progressed. He’s gone from a player who didn’t see any action at all in some games last season to one that is starting to be ultra-aggressive, as evidenced by three coast-to-coast layups in traffic.

“He’s starting to shine more and more, and that comes with confidence and maturity,” Borrego said. “You’re starting to see signs of why we drafted him. Give him a lot credit because he’s stuck with it and is getting better. Things haven’t worked in his favour the last couple of years, but he’s owned that and he’s improved.”

Langston Galloway had a career-high 32 points on seven 3-pointers for Detroit, and Andre Drummond added 16 points and 20 rebounds.

The Pistons have lost four straight.

“This is the second time this team got us at the buzzer here, so it’s tough,” Galloway said. “It’s a tough one to swallow.”

Pistons: Bruce Brown and Cody Zeller had to be separated after getting tied up underneath the basket midway through the fourth quarter. They were called for double fouls.

Hornets: Graham got his second straight start with Dwayne Bacon (sore right knee) still out. ... Coach James Borrego got a technical when he argued an offensive foul against Miles Bridges when he accidentally elbowed Griffin in the head.

Blake Griffin had 19 points on 6-of-19 shooting after missing the last three games with left hamstring and posterior knee soreness.

Pistons coach Dwane Casey said the team’s final play was designed to have Rose kick the ball out to the corner, but instead the veteran point guard dished to the wing. However, nobody was there and the ball sailed out of bounds.

“It hurt a lot, but I’ll take the blame for tonight,” Rose said. “Late turnovers and I’ll figure it out.”

“He got in the paint and got where he wanted to go,” Casey said. “He just didn’t make the right decision on his kickout.”

In what has become a disturbing trend for the Hornets, they started slow and dug themselves an 11-2 hole after missing six of their first seven shots. Charlotte (5-7) has trailed by double digits in all 12 games this season.

Pistons: At Chicago on Wednesday night.