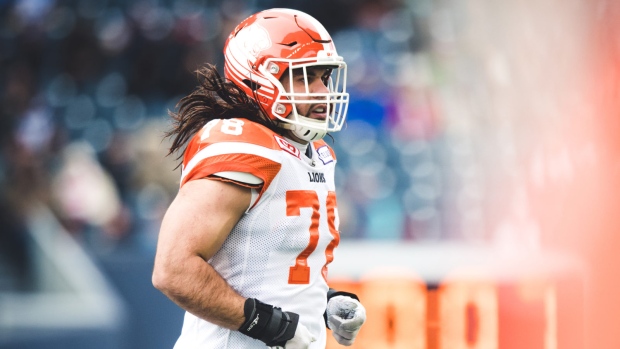 The six-foot-three, 291-pound Luke appeared in 53 regular-season games with B.C., which took him in the first round, No. 7 overall, in the 2017 CFL draft. Luke helped the University of Montreal capture a Vanier Cup in 2014.

TORONTO — The Toronto Argonauts acquired American linebacker Jordan Moore and the rights to a negotiation list player from the Hamilton Tiger-Cats on Wednesday.

In return, the Ticats landed the rights to two players on Toronto negotiation list. The 26-year-old Moore had one start in five games with Hamilton last year, registering five tackles and four special-teams tackles.

The Ticats also American defensive back Patrick Levels as a free agent. Levels, 25, had 86 tackles, five sacks, two forced fumbles and four pass knockdowns in 18 regular-season games with Montreal and was named an East Division all-star.

The five-foot-11, 187-pound Levels has started 23-of-43 career regular-season games played with Calgary (2017-18) and Montreal (2019). He had accumulated 122 tackles, 14 special-teams tackles, five sacks, one interception, two forced fumbles and one fumble recovery.

He appeared in two Grey Cups with Calgary, winning in 2018.

REGINA — Josiah St. John is back with the Saskatchewan Roughriders.