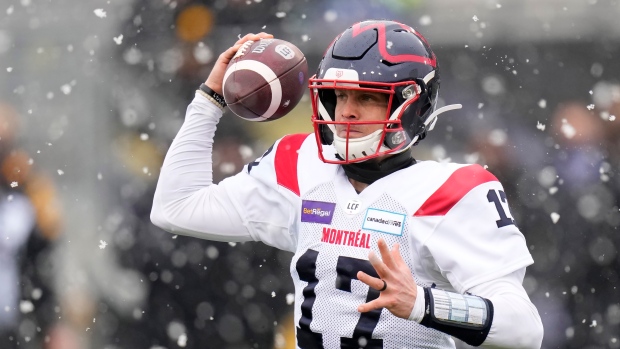 MONTREAL — The feeling around the Montreal Alouettes as they cleaned out their lockers after an early playoff exit was that they could beat any team in the CFL — including themselves.

The Alouettes bowed out of the playoffs last Sunday with a 23-12 loss to the Hamilton Tiger-Cats in the East Division semifinal. During the team’s end of season press conference Thursday, several players said a lack of discipline and execution made the Alouettes their own worst enemy.

“I think it was three things: It was penalties, it was turnovers and it was not scoring in the red zone,” said wide receiver Eugene Lewis. "We had that problem all year and we kept talking about it and we just weren’t able to consistently do those things the right way."

Some of the most damaging penalties came from special teams. Montreal was often forced to start from deep in their own zone, making drives difficult for the offence.

“It’s unacceptable to start drives inside our 20 or our 10-yard line, it’s really tough in Canadian football.”

Head coach Khari Jones took the blame for his squad's lack of discipline.

“It does fall with me and that was something that I wasn't proud of with this team,” Jones said. “I will make sure that from the start of the season to the end of the season we will fine, bench out, we will release, we will do anything necessary to curb those penalties."

General manager Danny Maciocia added that the work on special teams was "not satisfactory." Maciocia, who finally got to live out his first season as GM after the 2020 campaign was cancelled due to COVID-19, said that he and the staff have already started planning for 2022.

The Alouettes’ most pressing off-season issue is that there may be too many cooks under centre. The Alouettes started the year with Vernon Adams Jr. who threw for 1,949 yards and 14 touchdowns before the former University of Oregon star suffered a season-ending injury in October.

Matthew Shiltz filled in for three games before Maciocia acquired Trevor Harris from the Edmonton Elks. The veteran finished the season as starting quarterback throwing for 703 yards and eight touchdowns in four games.

The question of who will be next season’s No. 1 remains.

“I think we find ourselves with a lot of depth at this position,” Maciocia added. “Now, it’s about choosing which direction we’ll be going because it will be almost impossible to keep two quarterbacks that earn what they will earn in 2022.”

Maciocia said he will evaluate the situation with Jones, who is also Montreal's offensive co-ordinator and quarterbacks coach.

"I like our quarterback situation,” Jones said. “Now, with the people that we have in place, we know we have to make decisions. But the fact that we had three quarterbacks winning football games this season speaks well of our position in the league."

Jones himself is heading into the last year of his contract, and Maciocia said that “the hope is to have him back" after his current deal expires.

Adams did not want to speak on who would potentially be next season’s starter, but said he learned a lot from Harris during their time together.

“I just didn’t really have someone that would say: ‘This is how we do, this is how we break it down,'" Adams said. "I saw the way he did it and I really like the way he does it and it helps him stay sharp mentally.

"I made a list of about seven or eight things that I’m taking from his game that I think I’ll add to mine."

Adams is focused on proving he can be a starting quarterback in the CFL going forward, and hopes to do so in Montreal.

"We keep these core guys together on offence and we’ll show everybody what we’re really made of," he said.

Harris did not speak during the Alouettes’ end of season press conference.

Another key upcoming free agent is Lewis. The receiver was one of the Alouettes’ biggest offensive weapons in 2021, second behind teammate Jake Weineke in touchdowns with nine despite missing the last game of the regular season.

He also finished the campaign third in receiving yards with 964.

Out of contract heading into the off-season, Lewis admitted that he will take his time with the decision and process Montreal’s playoff loss first.

"It's still early. It usually takes a week to get over it because I hate losing more than I love winning,” Lewis said. “Next week, I’m going to call my agent and talk to them, talk to the rest of the coaches, talk to Danny and then go from there.”

Lewis could be a hot commodity in free agency, but his love for the Alouettes organization remains unequivocal.

“I love the Alouettes, I love this team, I love fighting for this team every week," Lewis said. “This is the team that gave me the opportunity to put myself in the position that I’m in now because four years ago nobody knew who I was.”

For Maciocia, the feeling is mutual and the Alouettes will try to keep their star wide receiver in Montreal.

"I’ve already had preliminary discussion with Eugene, he stated the desire of being an Alouette," Maciocia said.

“We just have to find a way to make it fit but clearly Eugene is a major piece of what we want to do here looking forward and we think we can win a championship with him."

This report by The Canadian Press was first published Dec. 2, 2021.

Note to readers: Corrects spelling of Alouettes in second paragraph: Changes "something" to "someone" in the 18th paragraph