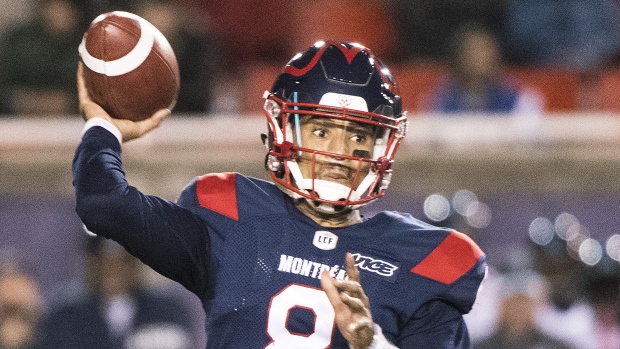 Vernon Adams Jr. was hoping this May would give the Montreal Alouettes an opportunity to build on momentum they sparked in 2019, when the team hosted a playoff game for the first time in five seasons.

But with COVID-19 delaying the start of the CFL season at least until September, the Montreal quarterback is taking calls from teammates worried about the CFL’s 2020 season instead of studying offensive plays and defensive coverages.

“I think it’s more overwhelming for other players. Myself, I’m a relaxed type of dude,” Adams Jr. said from his home in Tacoma, Wash. “I’m not trying to be on the guys too much, but I’m definitely reaching out and communicating and seeing what’s going on.”

After three seasons – with two stints in Montreal – of attempting to find his place in the CFL, Adams Jr. enthusiastically embraced the opportunity Alouettes head coach Khari Jones handed him in 2019.

But navigating the emotions of his teammates during the uncertainty of a pandemic is proving to be a challenge.

Still, the 27-year-old is learning new ways of leading, and sees the value of being the guy his teammates look to for reassurance.

Adams Jr. is building a list of all his teammates’ questions, and he is taking that list to Alouettes linebacker Henoc Muamba, who is Montreal’s representative with the CFL Players Association.

“If we do get out there and play, will everyone be taking [COVID] tests every week,” Adams said as he talked about his own list of concerns, “If we don’t play – I know we need butts in the seats – are we getting 50 per cent pay or 75 per cent pay?

“But the main thing is health and safety; that is the biggest thing that we all want. We want to play; we want to provide for our families.”

On a personal level, Adams Jr. isn’t feeling tremendous financial pressure after signing a contract extension that keeps him in Montreal through 2022 and reportedly paid him a $165,000 signing bonus.

But money continues to be the oft-repeated concern for Alouettes who reach out to Adams.

“It’s going to be different for me than a rookie who is making $60,000, or a rookie who hasn’t even gotten paid yet,” said Adams Jr.

“I see a few guys tweeting out ‘Have a [financial] Plan B.’ I know during this pandemic you can’t even go out and get many jobs because people are getting laid off.

“Everybody’s money is different, so you have to handle it differently.”

With the uncertainty surrounding the 2020 season and the financial worries of others top of his mind, Adams Jr. is being extra careful with his own finances.

The quarterback said he put half his signing bonus away for his children and invested $20,000-$30,000 into a home gym in his garage, complete with weights, a football throwing net and a portable steam sauna.

Adams Jr. also began delivering food as an Uber Eats driver in early May, just to earn a little extra cash, and to add another task to his growing daily routine.

Right now, the quarterback wants a packed schedule to keep his mind focused and to set an example for his teammates.

“Mentally you have to be cool, calm, collected, confident, and composed,” Adams Jr. said. "The biggest thing really is to be composed.”