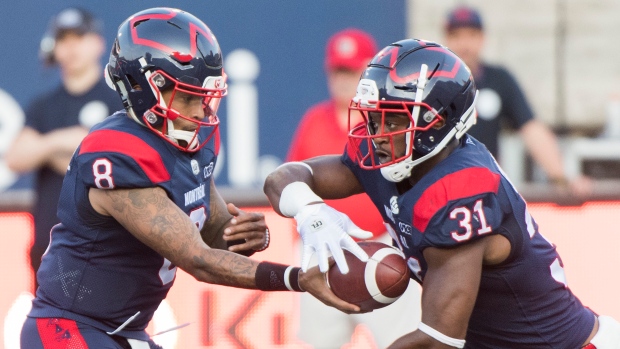 Montreal Alouettes quarterback Vernon Adams Jr. and running back William Stanback were both at practice on Tuesday after missing Friday's loss to the Saskatchewan Roughriders due to injuries.

Adams Jr. suffered a "minor concussion" in the team's Week 8 loss to the Ottawa Redblacks, while Stanback sustained a lower-body injury in that same loss.

The Alouettes also had wide receiver DeVier Posey back at practice on Tuesday after he was activated off of the six-game injured list.

Anthony Pipkin and Matthew Shiltz both saw time at quarterback in the weather-shortened 17-10 loss to the Roughriders on Friday, while fullback Spencer Moore led the team with four rushing attempts for 42 yards.

TSN's John Lu reports Adams Jr. was the first quarterback up in running back drills, which is a positive indicator that he could return for Saturday's game against the Calgary Stampeders.

The 26-year-old Adams, who is in his fourth season in the CFL, has passed for 1,147 yards and five touchdowns against three interceptions this season. The dual-threat has also added 224 yards rushing along with five touchdowns.

Stanback has rushed for 592 yards and four touchdowns this season along with 161 yards receiving.

Posey, 29, has nine receptions for 100 yards in three games with the Alouettes this season. He has been sidelined since Week 5 due to a calf injury.