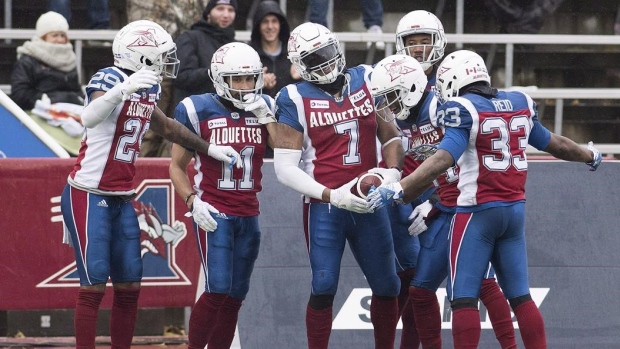 John Bowman will get the chance to formally say good-bye.

The Montreal Alouettes will honour their career sacks leader Saturday night during their home game against the Saskatchewan Roughriders. Bowman, 39, retired in 2021 after spending his entire 14-year pro career with the CFL franchise.

"It means a lot," Bowman told reporters during a video conference Thursday. "I didn't really get to say bye to the people the way anybody wanted to.

"To stay in one organization for as long as I did was a blessing and that gives me peace. I'm happy with what I accomplished, not just individually but as a team."

The six-foot-three, 255-pound Bowman joined the Alouettes in 2006 and quickly established himself as one of the CFL's top pass rushers. Seven times he registered double-digit sacks (including a career-high 19 in 2015) and even in his final season had a career-best 46 tackles along with eight sacks.

Bowman, a native of Brooklyn, N.Y., appeared in 230 career regular-season games with Montreal, winning Grey Cups with the franchise in 2009-10. He was an East Division all-star nine times and twice earned league honours and his 134 sacks rank him first in club history and sixth all-time.

Bowman helped Montreal (10-8) finish second in the East Division and reach the playoffs for the first time in four years in 2019. But after the CFL cancelled the 2020 season due to the COVID-19 pandemic, the Alouettes opted against re-signing Bowman for the current campaign, a decision he said he's at peace with.

"I've been prepared mentally to retire for five years," Bowman said. "Every off-season it was a thought in my mind.

"I'm at peace with everything right now. I'm injury-free, I'm able to bend my knees, I had zero concussions so that gives me peace of mind. Whether I wanted to play again or not, that's irrelevant."

And getting the chance to bid farewell to Montreal fans is important to Bowman.

"The city embraced me," he said. "They really brought me in and I can really appreciate that."

While Bowman achieved many career milestones in Montreal, he's still bothered by his biggest setback. That was the Alouettes' 22-14 loss to the Calgary Stampeders in the 2008 Grey Cup game played before over 66,000 fans at Olympic Stadium.

"That 2008 Grey Cup haunts me ," Bowman said. "The energy (at the Big O) was outrageous and just winning that Grey Cup and bringing it Montreal would've meant the most to me."

Bowman and the Alouettes would claim consecutive Grey Cup wins the next two seasons. But in Bowman's mind, his biggest career accomplishment was establishing himself as a hard worker.

"Whether people thought I was the best D-end or the worst D-end, nobody ever said, 'He doesn't play hard.'" Bowman said. "At the end of the day, whether you're good or you're not, the only thing you control is your effort, attitude and energy.

"For the better part of 14 years my teammates every week could count on me to bring it . . . and I did that."

Bowman said he's spent the last five months on an "extended vacation with the snowbirds in Florida." As for what lies ahead, Bowman said becoming a football coach -- first as a defensive-line coach -- has definite appeal.

"I wasn't blessed with all the physical assets of the great D-ends, I was a worker," he said. "I want to be able to explain things in those kind of terms, I want to learn how to relate information and knowledge.

"I'm not going to say I'm going to become a great coach, I don't know. But I think it's easy for me to relate to a guy who has to work to become who he's going to be because that how I made myself."

Bowman would love nothing more than to begin a coaching career in the same city he spent 14 years in as a player. However, he was quick to point out he's not had any discussions with the Alouettes regarding that.

"I'd love to be in Montreal, for sure," he said. "But in the coaching business you kind of take what's given to you at the beginning before you can stake your claim.

This report by The Canadian Press was first published Oct. 28, 2021.