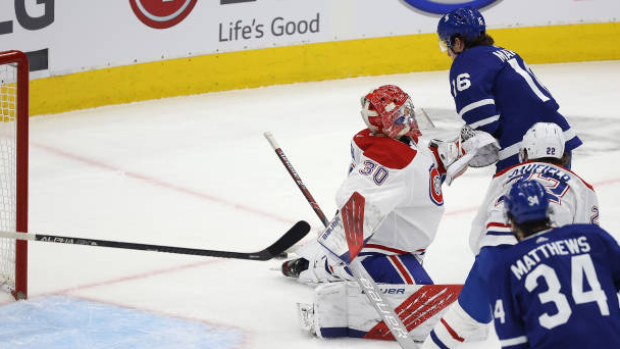 Rookie goalie Cayden Primeau allowed four goals on 15 shots before being pulled after the first period in the Montreal Canadiens loss to the Toronto Maple Leafs Thursday night.

Jake Allen, who  entered in relief of Primeau and stopped 19 of 20 shots in the 5-2 loss, said post-game he told Primeau to keep his chin up during the first intermission.

"I talked to him in the dressing room quick, just me and him," Allen said. "It's a bump in the road for him. I can tell how good a goalie he is and how good a kid he is. Once Carey Price's legacy goes, Cayden is going to be the guy here. You have to fail to succeed in this league, especially as a goalie. I'm sure he's going to take it hard, as all young guys do. I would have done the same thing. But he's going to move on and be ready to go for us. We're going to need him again."

The Canadiens were outshot 15-9 in the first period, falling behind 4-0 in the first frame after losing 5-1 to the Ottawa Senators on Wednesday night.

The 21-year-old Primeau saw his record for the season drop to 1-2 with a 4.26 goals-against average and a .859 save percentage. Canadiens defenceman Ben Chiarot said the loss, however, was not on Primeau's shoulders.

"They jumped all over us," Chiarot said. "We were slow out of the gate and they came out pretty quick and we spotted them a couple of goals. It's an uphill battle from there, and on a back-to-back situation, that's not easy. That wasn't Primeau's fault. It's our fault, we were flat in front of him and didn't give him any help. Young goalie going in, we have to be sharp early on and let him find his groove."

The Canadiens, who missed a chance to clinch their playoff spot on Thursday, will face the Maple Leafs again Saturday before wrapping their season with two games against the Edmonton Oilers.