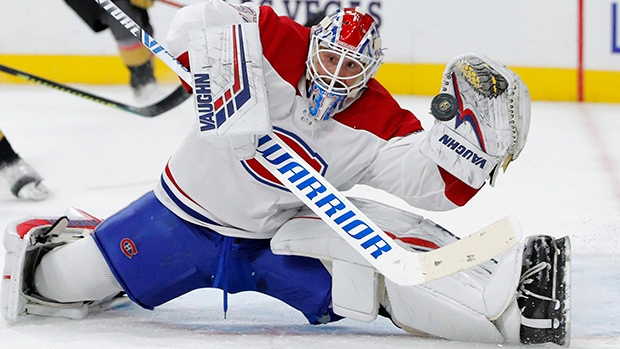 Montreal Canadiens netminder Keith Kinkaid has a language all to himself on Hockey Twitter.

He types in code, or Kincode, after every Habs win – firing off a tweet that typically generates more than a thousand likes in a matter of minutes.

Kinkaid’s emoji-filled, celebratory keyboard blasts began in New Jersey, but he carried the tradition to Columbus and then across the border this season to Montreal.

The tweets are their own language, appreciated universally in both English and French in Montréal and across La Belle Province.

“I just wanted to have fun with it. Then it kind of took off,” Kinkaid said. “I’ve gone team to team and I didn’t know I was going to have to keep doing it, but it’s fun to get fans engaged. I think the fans like player interaction.

“It’s something to look forward to after a win.”

For the most part, Kinkaid’s tweets do not require much translation. Scan the scoresheet and it’s relatively easy to pair the player to his designated emoji through his performance.

But there was one hiccup in New Jersey. The emojis, as they appear on Kinkaid’s iPhone, don’t necessarily correspond the exact same way on Twitter.

So Kinkaid thought he was in the clear picking the clown emoji to represent fellow Devils goaltender Cory Schneider, since the clown had red hair.

Kinkaid wasn’t calling Schneider a clown; he was just playing off the clown’s hair colour that matched the ginger-haired goalie.

One problem: “On Twitter and some phones, the clown has blue hair.”

The joke was lost in translation. Kinkaid had to get the all clear before tweeting. He didn’t want to upset his teammate.

“‘Schneids said it was okay with it,’” Kinkaid said, laughing. “That one was pretty funny.”

Kinkaid, 30, is a fervent Yankees fan from Farmingdale, N.Y. on Long Island. He lifted the idea for his postgame tweet from former Yankees shortstop Didi Gregorius.

But changing teams three times in the last season, before settling with the Canadiens on a one-year deal worth $1.75 million, has created a certain amount of pressure for the backup - as if filling in for Carey Price wasn’t pressure enough.

As the new guy, Kinkaid needed to come up with an emoji for each of his teammates.

“I had to think about it a lot,” Kinkaid said. “I didn’t really know everyone’s personality and everyone’s nickname. Some of the emojis are okay, some are easy. But it’s fun - even if some of them don’t even make sense.

“The guys think it’s funny. Some guys follow it. They’ll give it a like or a retweet.”

Kinkaid said Canadiens fans seem to get a kick out of the emoji for defenceman Jeff Petry - a petri dish - and the family emoji for forward Nick Cousins.

Kinkaid took the time to decode the ‘Kincode’ for TSN: 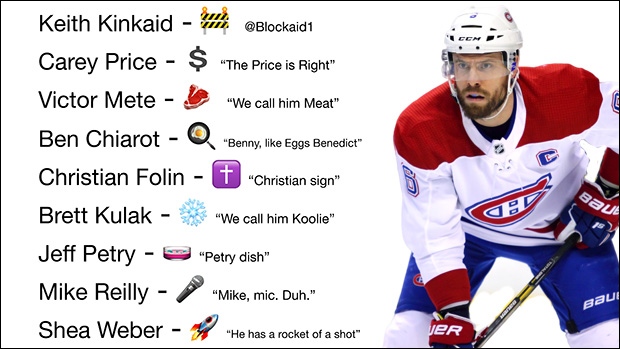 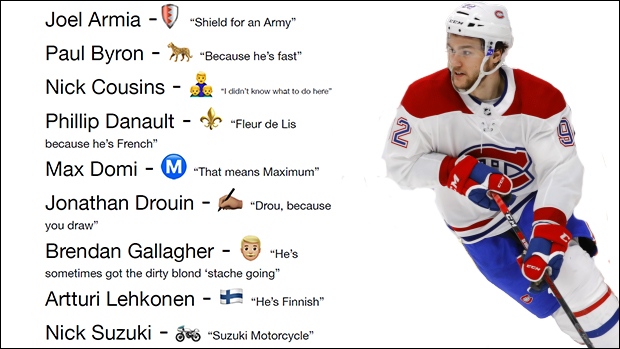 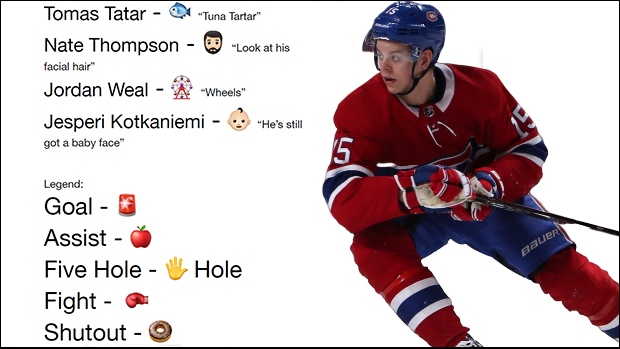 But we put Kinkaid to the test. We challenged his knowledge of Habs history him to come up with an emoji for five of the Canadiens’ all-time greats.

From Howie Morenz as the ‘Mitchell Meteor’ to Larry ‘Big Bird’ Robinson and the ‘Pocket Rocket’ Henri Richard, Kinkaid certainly did not disappoint. 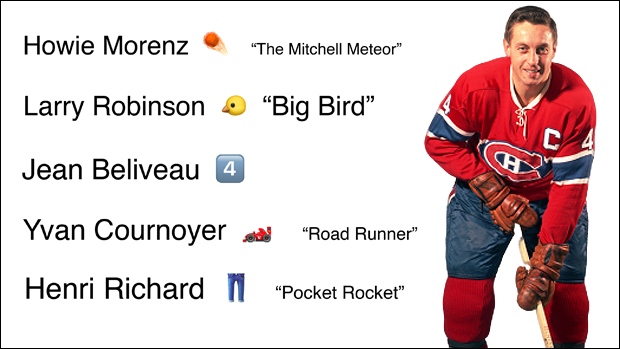 Kinkaid said he’s tried to step his game up by adding another weapon to his celebratory arsenal in the form of GIFs. After each win, the GIF has some sort of relation to the opponent – whether it’s been a trip to Sin City or a victory over the Blues this year.

Even though Kinkaid didn’t appear in a single game for the Columbus Blue Jackets after the trade deadline last year as the third goaltender, he said his GIFs during the playoffs proved popular in the dressing room.

“I definitely did some trolling during the playoffs last year,” Kinkaid said. “The guys in Columbus liked it a lot, especially when I made a customized GIF of us sweeping Tampa on the floor. This is supposed to be fun, so I just have fun with it.”

So, all in good fun, could Kinkaid come up with an emoji for his bosses in Canadiens GM Marc Bergevin and coach Claude Julien? The chiselled Bergevin came to mind instantly in emoji form: 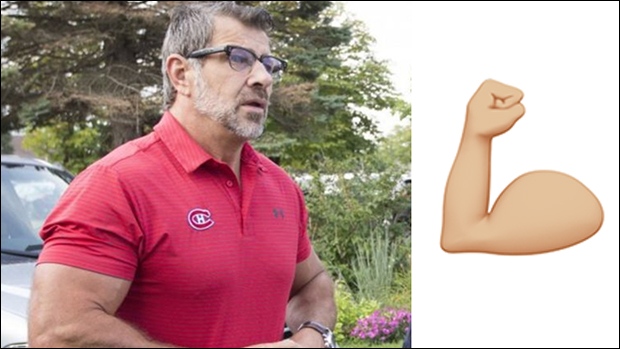 As for Julien, Kinkaid chuckled and reserved answer: “I think I’ll stay away from Claude until maybe I have a real good game.”