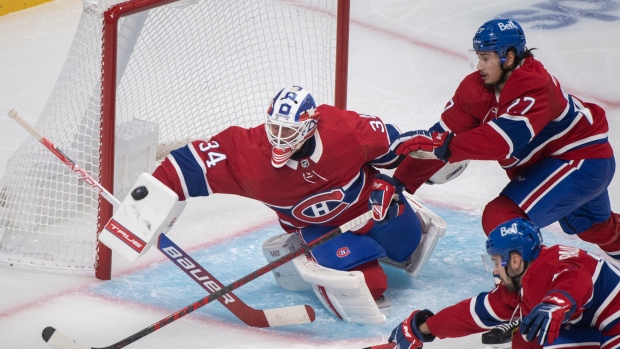 The start of the Montreal Canadiens’ season has been the antithesis of the team’s run to the Stanley Cup Final.

The team found playoff success through stifling defence, strong goaltending, and timely scoring. None of which have been present during the team’s season-opening losing streak.

Viewers in the Canadiens’ region can watch the Habs take on the Carolina Hurricanes LIVE at 7 p.m. on TSN2, TSN.ca, the TSN App, and TSN Direct. Viewers on the Bell network can watch in TSN 5G View.

Despite the absence of Carey Price, goaltending has been the least of the Canadiens’ worries this season. The team has scored just three goals during its poor start, while allowing 15. Winger Jonathan Drouin, who scored two goals in 44 games last season, has accounted for 66 per cent of the Habs’ goals this season.

The hallmark of the Habs’ playoff run was the ability to take and hold early leads. Their stretch of 447:08 without trailing during their seven-game playoff win streak against the Toronto Maple Leafs and Winnipeg Jets is the second-longest playoff mark of all time.

This season, the team has led for a mere 2:50, all coming in the season opener against the Leafs.

While four-game losing streaks to start a season are rare for the franchise, the scoring numbers are very similar to the last time the Habs came out of the gates this slowly.

Fortunately for the Canadiens, history does provide some hope for the rest of the 2021-22 season. The club has come back to make the playoffs in each of the three previous 0-4-0 starts.

The addition of stay-at-home defenceman David Savard has not offset the loss of captain Shea Weber on special teams and has played a role in the Canadiens being one of the league’s worst teams shorthanded and on the power play.

The absence of steady defenceman Joel Edmundson has also made things tough on the Canadiens’ goaltending, as the tandem of Jake Allen and Samuel Montembeault has posted a .870 save percentage, 25th in the NHL.

Despite the team’s other issues, the lack of scoring has been at the forefront. The Canadiens have plenty of depth on the wings but have received no production from any forward other than Drouin.

Five players who scored a combined 86 regular-season goals for the Canadiens last season have yet to light the lamp this season. Head coach Dominique Ducharme knows his team is better than the results have shown and that the club must work to turn things around.

“We’re not as bad as people say. We know we’re a good team and we’re going to show that,” Ducharme said to the media. “It’s finding that identity and urgency and duplicate that every other day or so, during the season.

“We understand why we are where we are, we understand how not to do things and it’s our job now [to fix them].”

“These fans care about us they want us to win,” said forward Christian Dvorak. “We’re definitely frustrated but we can’t get too down on ourselves. We just have to do the simple things right and once we get a win the ball will get rolling for us.”