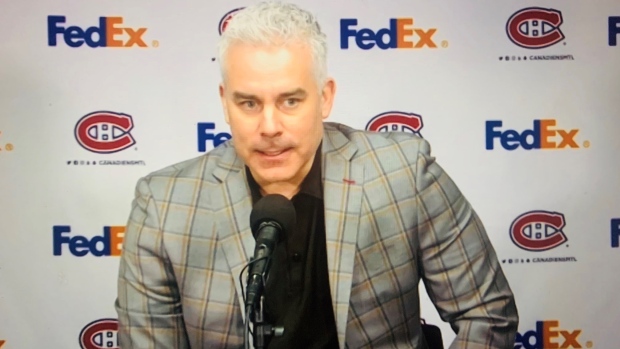 What if. Two tiny words that Claude Julien will likely mutter for a long time.

What if Carey Price didn’t stumble to the second-worst start to a season in his career?

What if the wheels hadn’t completely fallen off the Montreal Canadiens?

Exactly two weeks ago, on Feb. 10, the Canadiens (8-2-2) and Toronto Maple Leafs (10-2-1) squared off at the Bell Centre with first place in the North Division on the line.

By Wednesday morning Julien was out of work, fired after the Habs lost six of eight and fell to fourth place to cap an incredible fall from grace.

The Canadiens went from brawny juggernaut to unconfident jugglers in the blink of an eye.

Life comes at you fast in the NHL - particularly when you coach the Canadiens in a season with Stanley Cup aspirations.

The alarm bells were ringing. General manager Marc Bergevin, who had been patient and deliberate in building up the Habs to this point, heard them loud and clear.

Julien, 60, was replaced by 47-year-old assistant coach Dominique Ducharme on an interim basis, as the Habs transitioned from the NHL’s sixth-oldest head coach to the sixth-youngest.

Associate coach Kirk Muller was also fired and will be succeeded on the bench by recently retired NHLer Alex Burrows, who spent the past two seasons as an assistant coach with the AHL’s Laval Rocket. Assistants Luke Richardson and Stephane Waite retained their posts.

Julien had next season remaining on his contract with the Canadiens, valued at $5 million. He finished his second stint with the Habs with a 129-113-35 record (.529 points percentage) and one playoff series win, last summer’s upset win over Pittsburgh in the qualifying round that vaulted the Canadiens’ expectations.

It’s expected Ducharme will hold the post for the remainder of the season, though Bergevin is expected to address that very subject in a mid-afternoon press conference after the team arrives in Winnipeg.

“I would like to sincerely thank Claude and Kirk for their contributions to our team over the past five years during which we worked together. I have great respect for these two men whom I hold in high regard,” Bergevin said in a statement.

Ducharme appeared to be a head coach-in-waiting. He was hired by the Habs nearly three years ago after a 10-year run as bench boss in the Quebec Major Junior Hockey League, where he hoisted the Memorial Cup in 2012-13 as coach of the Halifax Mooseheads.

Ducharme garnered attention on the national stage in 2017 and 2018 when he guided Team Canada to silver and gold medals at the World Junior Championships in Toronto/Montreal and Buffalo. He was selected by Bergevin over AHL Rocket head coach Joel Bouchard.

“In Dominique Ducharme, we see a very promising coach who will breathe new life and new energy to our group,” Bergevin said in his statement. “We feel that our team can achieve high standards and the time had come for a change.”

What plagued the Canadiens was a crisis of confidence over the past number of weeks, one pointed out by Julien himself as the Habs morphed from a 7-1-2 start into a 9-5-4 slog.

They appeared out of sync and made repeated mental mistakes, the NHL’s most penalized team per game taxing their 22nd-ranked penalty kill. Their defensive zone play became porous in a shocking turnaround for a team that moved the puck and outmuscled opponents with ease to start the season.

Julien said Tuesday night, among his final words as coach: “We’re going to try to retool stuff, but so much of that comes with confidence. And your best players, if they’re not confident, they don’t execute properly. So that’s what this whole game is about - is playing with confidence.

“And when you have confidence, you make the right plays and the right decisions. That’s what we’re struggling with right now is showing it in all parts of our game.”

That struggle wasn’t part of Bergevin’s plan. After his young team showed such promise in the NHL’s playoff bubble in Toronto, Bergevin made a seismic trade for Josh Anderson and signed Tyler Toffoli to one of the larger free-agent deals of the off-season.

He better insulated Price by acquiring Joel Edmundson, also re-signed Jeff Petry to a $25 million extension. The team also committed significant dollars to Anderson and Gallagher with extensions upfront, and Jake Allen was added to provide Price plenty of rest in a shortened season.

No manager spent more money than Bergevin over the past six months. No manager looked smarter over the first three weeks of the season.

Now with his calculated coaching change, Bergevin’s bet is that the Canadiens can rebound as quickly as they tumbled.