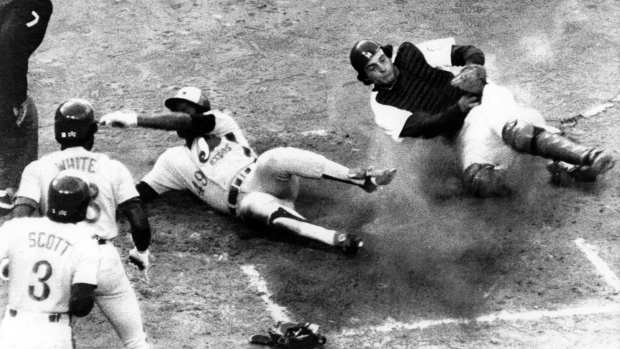 All week, TSN will be rebroadcasting memorable games from the Montreal Expos’ 1981 playoff run, including the very first Major League Baseball postseason game played outside of the United States.

You can watch Games 3 and 5 of the National League Championship Series between the Montreal Expos and Los Angeles Dodgers Thursday night on TSN5, TSN.ca the TSN App and on TSN Direct starting at 8:00pm ET/5:00pm PT.

Under the old format, the Montreal Expos would have been in the World Series after taking down the Philadelphia Phillies in the first round of the National League playoffs. But a work stoppage that summer wiped out almost a quarter of the regular season and for the first time ever, a third round was added to the MLB postseason.

Montreal’s win over the Phillies was the first postseason series victory for a Canadian team and would eventually stand up as the only in Expos history when they left for Washington, D.C., after the 2004 season.

The Dodgers got on the board first in Game 1 on a Ron Cey double off Expos starter Bill Gullickson in the second inning. They would add a second run that inning to take an early 2-0 lead, which was more than enough for Burt Hooten.

Hooten was in the midst of an incredible run with the Dodgers, carrying a 2.94 ERA over the past six seasons. NLCS Game 1 was no different as he held the Expos off the scoreboard into the eighth inning. Los Angeles went on to win 5-1, which was a big problem for Montreal.

Unlike now, the NLCS was a best-of-five series as opposed to a best-of-seven. Dropping Game 1 was always a tough hole to climb out of, but having to face one of the most electric starters in baseball in Game 2 made it that much tougher.

Pitching in his first full big-league season, left-hander Fernando Valenzuela was as lights out as they came. The 20-year-old had one of the best rookie seasons ever recorded, leading the league in starts, strikeouts, shutouts and complete games while pitching to an ERA of 2.48. Understandably, the Expos couldn’t have been too excited about facing him in Game 2.

But it wasn’t the dominant outing many were expecting as the Expos tagged the young southpaw for three runs in six innings. The performance many were expecting from Valenzuela was instead turned in by Expos starter Ray Burris, who averaged a lowly 3.4 strikeouts per nine innings that season. Burris kept the Dodgers off balance all afternoon, allowing just five hits and walking two en route to a complete game shutout to even the series at one game apiece.

Now, the tide had turned. Not only were the next three games at Montreal’s Olympic Stadium, the Expos had long-time ace Steve Rogers headed to the hill for Game 3. Rogers was a three-time All-Star and led the team that season in wins (12) and innings pitched (160.2).

But teams don’t make it to the NLCS by accident and the Dodgers’ rotation was as deep as any. Countering for L.A. was left-hander Jerry Reuss who came in with an ERA of 2.30 during the regular season.

Would Montreal take a 2-1 lead and push the Dodgers to the brink of elimination with the next two games at Olympic Stadium, or would the visitors find a way to take back control of the series? Find out tonight on TSN5 at 8:00pm ET.

Once Burris threw a complete game shutout to lift the Expos to victory in Game 2, it didn’t seem possible another Expos starter could pitch as well. Don’t tell that to Steve Rogers.

With the upper hand in the series on the line, the Jefferson City, Mo., native held the Dodgers to just one run over nine quality innings as the Expos took Game 3 4-1. Rogers was actually trailing 1-0 in the sixth inning when Montreal finally broke through against Reuss, evening the game 1-1 on a Larry Parish RBI single and taking the lead for good on a three-run blast by Jerry White.

Now, Canada’s team had all the momentum. Just one win away from their first World Series in franchise history, Game 4 saw a rematch of Game 1 starters: Hooten for the Dodgers, Gullickson for the Expos.

Just as things had gone for most of the series to date, the starters dominated, and things went into the seventh inning deadlocked 1-1. If the Expos could push across one or two runs, their formidable bullpen featuring Woodie Fryman, Bill Lee and Jeff Reardon were more than capable of closing it out. But down went the Expos in order in the seventh with the score still even at 1-1.

In the eighth, Los Angeles finally broke through. And they did it in a big way. A single to left field by Dusty Baker ignited the offence and eight-time All-Star Steve Garvey took a hanging breaking ball up and over the wall in left to make things 3-1. From there, the wheels fell off.

The Dodgers pushed across four more runs and went on to win 7-1. A disappointing result to say the least considering things were so close so late. But hey, there was still Game 5.

A day off in between meant each team’s Game 2 starters could return on regular rest for the decider. Ray Burris for the Expos, Fernando Valenzuela for the Dodgers.

Could the Expos punch their first ticket to the World Series in franchise history, or would the Dodgers get back to the Fall Classic for the third time in five seasons? Here's a hint: pay attention to what day of the week Game 5 was on.