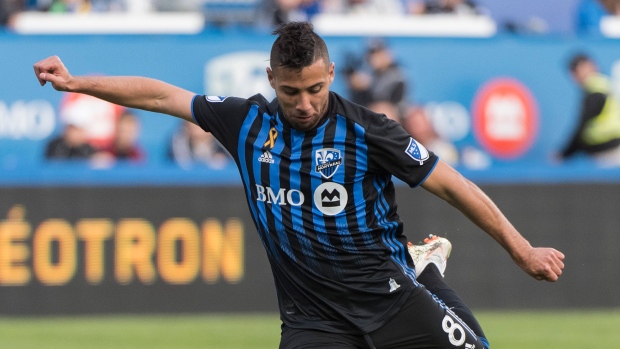 MONTREAL — The Montreal Impact will close out a disappointing regular season on Sunday against the New York Red Bulls before the focus turns to what could be an off-season of significant change for the Major League Soccer team.

The matchup between the 11-17-5 home side and the playoff-bound Red Bulls (14-13-6) could be star midfielder Ignacio Piatti's last appearance at Saputo Stadium as a member of the Impact. He's waiting to see if Montreal will exercise an option on his contract for 2020.

"Piatti is a legend here," Montreal defender Jukka Raitala said Saturday. "I don't know about his situation and what it's going to mean for next year. When he's fit, everybody knows that he's still a very important player for us. I've enjoyed so much being with him in the locker-room. He's a fantastic guy.

"If I look at my first year in Columbus, I found it weird that suddenly people just leave (at the end of the season). But that's how it works here. You have to respect that, and that's why you have to enjoy every moment."

The curtain may be coming down on a number of Impact careers following the final whistle on Sunday.

Bacary Sagna, Rod Fanni and Shamit Shome have contracts that expire at the end of the calendar year. Players on loan like Lassi Lappalainen, Orji Okwonkwo and Zachary Brault-Guillard could return to their respective European clubs.

Interim coach Wilmer Cabrera is also on the bubble. Cabrera is 1-4-1 in MLS since replacing Remi Garde as Impact head coach in August.

"This could be the last game for several guys," said defender Rudy Camacho, who is signed until 2021. "We don't know who's staying and who's going. We have to enjoy this game to the fullest. We have to win.

"We want to finish on a good note."

Montreal is forced to play for pride after being eliminated from playoff contention following last week's 1-1 draw against Atlanta United. That result extended the team's winless run to four games (0-3-1).

Currently ninth in the Eastern Conference, Montreal could finish the season as low as 11th depending on other results Sunday. All MLS teams are in action at the same time.

The Red Bulls are hitting their stride at just the right time. New York is undefeated in its last three games (2-0-1) following a three-game losing skid.

Sitting fifth in the East, the Red Bulls are still vying for a home playoff match. New York needs to beat Montreal on Sunday, combined with a draw or loss by D.C. United, in order to host a knockout game at Red Bull Arena.

"I don't look at standings too much," Camacho said about playing spoiler. "But if we can be an obstacle to them, why not. The pressure will be on them, not us. If we can get in their way, it would be our pleasure."

The Red Bulls have not conceded a goal during their current three-game unbeaten stretch. Goalkeeper Luis Robles has stopped all five shots he faced over those three games, giving him nine clean sheets on the season.

Another shutout may be in the works against an Impact side that has struggled to score goals all season, even at home. Montreal is 0-2-1 at Saputo Stadium since the end of August, scoring just once.

"They have the pressure and we can be a little more free," said Raitala, who was called up for Finland's two upcoming Euro 2020 qualifiers. "Though we haven't succeeded at home lately and that puts pressure on us to show the fans we're still a good team.

"You always want to finish the season with a victory."

BUSH OR DIOP: The Impact's starting goalkeeper on Sunday afternoon could reveal the team's intentions for next season. Clement Diop got the start last week against Atlanta, putting an end to Evan Bush's 66-game streak.

EVERYTHING ALL WRIGHT?: Two-time MLS Golden Boot winner Bradley Wright-Phillips has not scored since July 7. The Red Bulls striker has two goals this year.

SAPUTO SLUMP: The Red Bulls have not won at Saputo Stadium since 2012, going 0-6-2 in their last eight matches in Quebec.

BRIAN'S BACK: Red Bulls forward Brian White has recovered from an ankle sprain and could play his first game since Aug. 17. White has nine goals in 16 starts this season.

This report by The Canadian Press was first published Oct. 5, 2019.