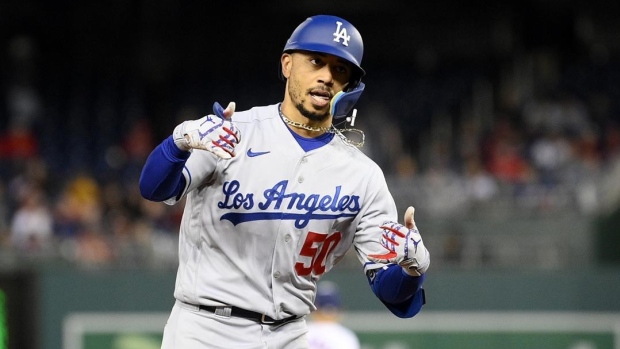 WASHINGTON (AP) — Mookie Betts homered twice on a night he was originally supposed to have off, and the Los Angeles Dodgers beat the Washington Nationals 9-4 Tuesday night.

Betts smacked a three-run homer off former Dodgers prospect Josiah Gray and hit solo shot off Victor Arano for his 21st career multi-homer game and his second of the season.

“Over the last 30 days, it’s as good as anybody on the planet right now,” manager Dave Roberts said. “It’s as good as I’ve seen him. He’s scoring runs at a crazy clip. He’s on base. He’s slugging at a ridiculous clip, too, and he’s playing Gold Glove defense. He’s making the game look a lot easier than it is.”

Chris Taylor and Trea Turner also homered for Los Angeles, which has won nine of 10. At 29-13, Los Angeles owns the best record in the National League.

Washington has dropped seven of its last nine and is a major-league worst 5-17 at home.

It was the first time Gray (4-4) faced the Dodgers since he was dealt to the Nationals at last year’s trade deadline in the deal that sent Turner and Max Scherzer to Los Angeles. Things unraveled quickly for the 24-year-old right-hander.

Turner hit a two-run homer three batters into the game and, after the Nationals scored three in the first, Betts poked a three-run shot into the front row in left field to make it 5-3. Taylor added a two-run blast in the third.

Gray gave up seven runs in three innings, and is tied with Cincinnati’s Hunter Greene for the NL lead in homers allowed with 12.

“He didn’t execute well tonight,” Washington manager Dave Martinez said. “It could be he was a little amped up facing his old team. Coming into the series, we know about the Dodgers. They walk, and they hit homers. You look at what they did. Walk, home run. Walk, home run.”

Betts’ solo shot, his 12th homer of the season, to greet Arano in the fourth extended the lead to 8-3.

“It makes it a lot easier, but before I was hitting .400, I was hitting .100,” Betts said. “I had to make that change in the mindset and really just enjoy it. It seems to have worked so far.”

The former AL MVP scored a run in his 12th consecutive game, tying Rafael Furcal (in 2010) for the longest such streak since the Dodgers moved to Los Angeles. Zack Wheat set the franchise record with a 13-game streak for the Brooklyn Robins in 1925.

Betts was scheduled for a routine off day Tuesday, but Roberts said outfielder Cody Bellinger woke up not feeling well, which prompted some lineup juggling. Now, Betts is set to sit in Wednesday’s series finale — assuming there isn’t another change of plans.

“We’re going to see how Cody comes in, but I don’t want to renege on the deal,” Roberts said. “But gosh, he makes us a lot better ballclub when he’s in there.”

Nationals: RHP Stephen Strasburg allowed three runs in 2 2/3 innings for Class A Fredericksburg in his first rehabilitation appearance since undergoing thoracic outlet surgery last year. He struck out three while walking four. … INF Ehire Adrianza (quad strain) was 3 for 3 with a walk and a run scored as he started a rehab assignment at Double-A Harrisburg. … OF Victor Robles did not start a day after departing with a calf cramp. Martinez said Robles was available to play and could start Wednesday.