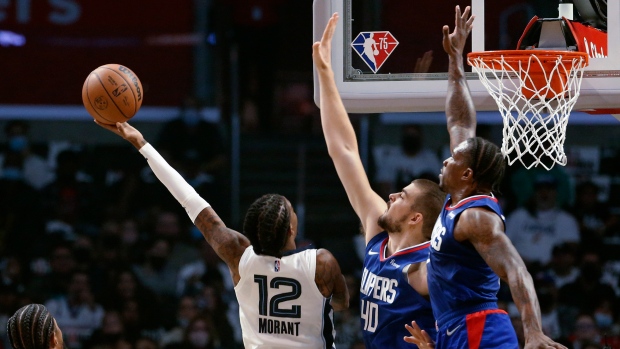 Morant burned Cleveland for 37 points — second-most in franchise history in a season opener — in the Grizzlies’ 11-point win. He came back strong to open a four-game West Coast trip in which the Grizzlies face three playoff teams from last season.

The Clippers twice got within two points in the final 1:14 on baskets by Paul George, who finished with 41 points — seven off his career high — and 10 rebounds.

But Jaren Jackson Jr. answered with a 3-pointer that kept the Grizzlies in front 119-114 with 17 seconds to go.

Memphis coach Taylor Jenkins said, "Ja collapsing the defense and then kicking out and trusting his teammate to make a big shot. That's leading by example.”

George missed a 25-footer and Luke Kennard fouled Desmond Bane, who made 1 of 2 free throws. George missed again from the left side as the Clippers fell to 0-2 to start the season.

“I’m happy we fought, but that can’t be who we are, just be happy that we played hard,” George said. “Play hard should be a given. We got to win games.”

De’Anthony Melton added 22 points, Jackson had 21 points, Bane had 19 points and Steven Adams 17 points and nine rebounds for the Grizzlies.

“To close out this one was good, especially on the road,” Jackson said.

Memphis outscored the Clippers 30-11 to open the third and take an 89-73 lead after trailing much of the first half. Morant and Adams scored nine points each, and Melton and Bane hit back-to-back 3-pointers.

“He’s just explosive. He’s so good and so fast,” George said of Morant. “He made it tough for us, he put a lot of pressure on us.”

The Clippers closed with a 14-8 spurt, including consecutive 3-pointers from George, to trail 97-89 going into the fourth.

“They were going zone, going physical, trapping and doing everything to get us out of our rhythm, but we made some big-time plays,” Jenkins said.

Clippers: Dressed in street clothes, Kawhi Leonard sat next to the coaches on the bench. He’s rehabbing from surgery in July for a partial tear of his right ACL. ... Lost to Golden State by three in their season opener.

Grizzlies: Play the Lakers on Sunday as part of a four-game trip, tied for their longest of the season.

Clippers: Host Portland on Monday in the middle of a three-game homestand.