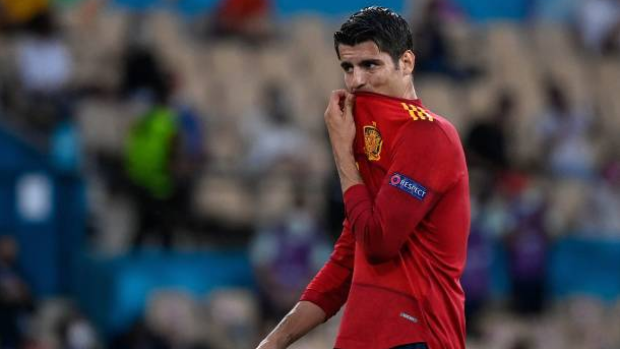 SEVILLE, Spain (AP) — Spain’s reserve players jumped from their seats in anticipation when Álvaro Morata found himself with only the goalkeeper to beat inside the Sweden area.

A defender had whipped a cross into the box and the ball fell to Morata’s feet with no one else near him. It was as clear a chance any striker could have asked for, and Morata promptly tried to send a low curling shot past the goalkeeper.

Spain coach Luis Enrique had already started to turn toward the bench to celebrate when he became as stunned as everyone else watching the European Championship match at La Cartuja Stadium.

Morata’s shot had missed just wide of the post.

And just like that, lack of scoring became an issue for Spain again.

Morata’s teammates also misfired as Spain created chance after chance, but couldn’t get more than a 0-0 draw against Sweden in their Group E opener on Monday in Seville.

Spain had also been held scoreless in its warmup match against Portugal, when it also had significant chances and couldn’t get on the board.

“There is no need to overthink it too much,” Luis Enrique said. “We created enough scoring chances to win the match, but we couldn’t capitalize on them. It was something obvious, everyone saw it.”

Morata wasn’t the only one missing chances against Sweden, but he was the one being singled out by Spanish fans and media.

“It’s much better to play when the fans are applauding than when they are jeering,” Spain midfielder Pedri González said Tuesday. “Morata is feeling well. He is very strong mentally. We know that he is a great player and that he can help us a lot. He knows that the goals will eventually come."

Morata initially had his named chanted by the crowd at La Cartuja, but fans quickly turned against him after the 38th-minute miss in front of the net. The Juventus striker also squandered an opportunity from inside the area early in the second half.

There were loud jeers by part of the crowd when he misplayed a ball near the goal line in what was his last touch before being substituted. There were more boos when he walked off the field to be replaced by Pablo Sarabia in the 66th, although some did applaud to try to support him.

Luis Enrique raised his arms to his head in despair after Morata's big miss, as did most of the player’s teammates. But they were all behind him afterward.

“Álvaro played a very good match, with the exception that we all had wished, and him first, that we had capitalized on the chances that we had,” Luis Enrique said. “His teammates also had their opportunities. But it’s fine. I think he is used to (the jeers) already, but it’s not something nice. It would be a lot nicer for everyone if he was being supported.”

Morata looked desolate after the miss in the first half. He went down to adjust his socks then slowly walked back without much of a reaction.

Spain had 17 total attempts against Sweden, with five of them on target. Dani Olmo and Koke Resurrección were among the players who also missed chances in front of the goal, as did substitute Gerard Moreno, the fan favorite coming off a great season with Villarreal.

Moreno helped lead Villareal to the Europa League title and was among the Spanish league's top three scorers this season. Many had expected for him to be the starter for “La Roja” at Euro 2020.

Moreno was loudly cheered by the crowd when he came on in the 74th, but he couldn’t find the net either, seeing his 90th-minute close-range header stopped by Sweden goalkeeper Robin Olsen.

Luis Enrique will have a few days to decide whether he will stick with Morata in attack or give Moreno a chance from the start. Spain’s next match is Saturday against Poland, which lost to Slovakia 2-1 in the other Group E game on Monday.

In a seemingly positive sign for Morata, the Spanish soccer federation announced Tuesday that he will be the player attending the official pre-match news conference alongside Luis Enrique on Friday.

“We have to keep creating scoring chances, just like we did against Sweden," Pedri said, "then I'm sure that the goals and the victories will come.”