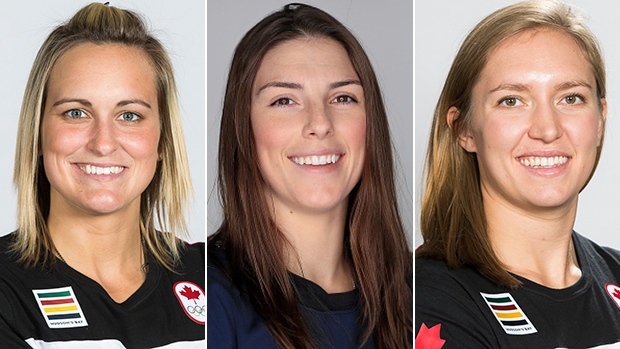 More than 200 women — including superstars Marie-Philip Poulin of Canada as well as Hilary Knight and Kendall Coyne-Schofield of the United States — have banded together in an effort to create a new future for the women’s professional game.

And that immediate future comes in the form of a bold statement, both literally and figuratively, that could mean there will be no high-level women’s hockey league in 2019-20.

“We will not play in ANY professional leagues in North America this season until we get the resources that professional hockey demands and deserves,” says a prepared statement released Thursday morning by a group of women players that is believed to number at least 200.

“We cannot make a sustainable living playing in the current state of the professional game,” the statement adds. “Having no health insurance and making as low as two thousand dollars a season means players can’t adequately train and prepare to play at the highest level.”

This stand by not only the game’s high-profile players but so many of the rank-and-file players would seemingly put the five-team U.S.-based National Women’s Hockey League out of business for the coming season or damage its credibility beyond repair.

The NWHL is the sole remaining professional league after the Canadian Women’s Hockey League (CWHL) folded March 31 following 12 years of operation. A significant number of NWHL players are believed to have endorsed the statement.

“The thought of not playing in a pro league [next season] is daunting and nerve-racking,” said Knight, who played in the now-defunct CWHL last season. “But we firmly believe we’re doing the right thing for our sport and that when we do play, we will do so in a league that embodies the values of our game. We can see where our game is now and where it has to be in order to be sustainable in the long term.”

“What we’re doing goes far beyond any one individual or their personal aspirations in the game,” Jenner said. “We all love hockey. We love to play hockey. But this is bigger than any one of us. It’s about the collective, about leaving the game in better shape than we found it. What exists now isn’t sustainable, it’s not viable. We owe it to not only ourselves but future generations to do this and to get it right.”

Canadian and American women, bitter rivals on the ice, met prior to the 2019 IIHF Women’s World Championship in Finland last month to begin the dialogue that led to the decision to shutter the women’s game next season.

“Once [the World Championship] was over we were able to really get the dialogue going and establish a level of trust with each other,” said Knight, who was heartened that the bitter rivals could put aside their nationalistic feelings for the overall good of the women’s pro game.

Jenner said when she first started playing internationally against the United States she might have been hard-pressed to imagine a day when the rivals could set aside their differences for a common goal. But that time has arrived.

“It’s a little different now,” Jenner said. “On the ice, we are rivals. It’s still very intense. But over the years a lot of [Canadian and Americans] have played on the same club teams so off the ice, there are more friendships now. We know that our power comes from being united. We’re all in this together. We have a common goal.”

It would appear the strategy or end game here is to create a void that could lead to a new model. That’s certainly the hope.

“We’re willing to figure out things as we go,” Knight added. “We don’t know what the future holds or what it will look like, but we’re confident this is the right thing for the sport.”

If the NWHL is no longer operational, many will be watching the National Hockey League to see if it might step up in some way. In the past, the NHL has provided some token financial support of the women’s game.

The NHL annually supported each of the NWHL and CWHL to the tune of $50,000 per year. The NHL was not prepared to make any greater financial commitment to league(s) because it had no say on the business models of each or how money would be spent.

In fact, NHL commissioner Gary Bettman has been on record as saying he didn’t think the women’s leagues — NWHL and CWHL — were viable long-term entities but would continue to offer limited financial support to them as long as they existed. After the CWHL folded, the league said it would designate funds previously earmarked to the CWHL to the NWHL for a total league contribution of $100,000.

Bettman, however, did say the league might be more proactive if there were no women’s league at all.

“What we have said is, if there’s no opportunity for women to play professional hockey, then we would explore what would make sense or might be appropriate,” Bettman said in the aftermath of the CWHL’s demise.

There will be those who suggest that is precisely why 200-plus women have opted to shutter the sole remaining league but there certainly appears to be no guarantees from the NHL or anywhere else. The immediate future for the women’s professional game is not clear.

“We heard the comments [from the NHL] after the CWHL folded,” Jenner said, “but we have no control over any of that. We’re just doing what we think is right, what will help to grow the women’s game. Big change, yeah, that can be a little bit scary but change doesn’t happen easily.

Here is the full statement from the women’s players group:

"We are fortunate to the ambassadors of this game that we revere so deeply and yet, more than ever, we understand the responsibility that comes with that ambassadorship: To leave this game in better shape than when we entered it. That is why we come together, over 200 players strong, to say it is time to create a sustainable professional league for Women's Hockey.

While we have all accomplished so much, there is no greater accomplishment than what we have the potential to do right here and right now – not just for this generation of players, but for generations to come. With that purpose, we are coming together, not as individual players, but as one collective voice to help navigate the future and protect the players’ needs. We cannot make a sustainable living playing in the current state of the professional game. Having no health insurance and making as low as two thousand dollars a season means players can’t adequately train and prepare to play at the highest level.

Because of that, together as players, we will not play in ANY professional leagues in North America this season until we get the resources that professional hockey demands and deserves.

We may have represented different teams, leagues, and countries – but this sport is one family. And the time is now for this family to unite. This is the moment we’ve been waiting for – our moment to come together and say we deserve more. It’s time for a long-term viable professional league that will showcase the greatest product of women’s professional hockey in the world.” #ForTheGame 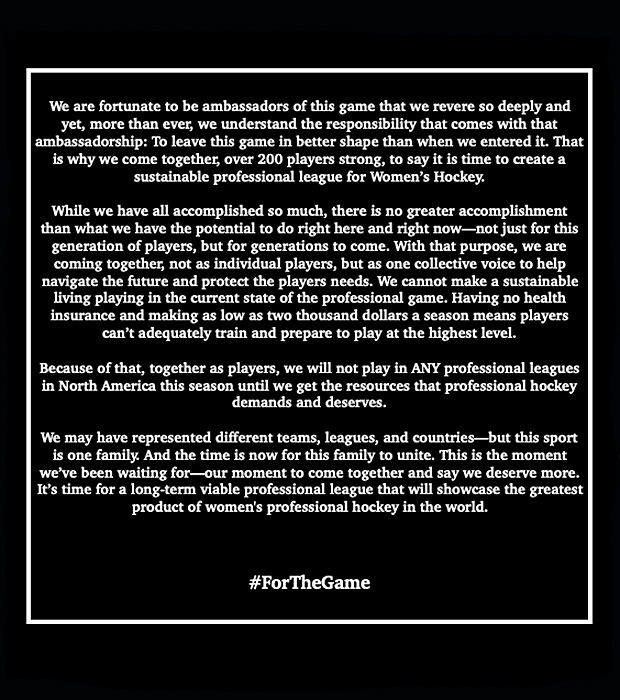