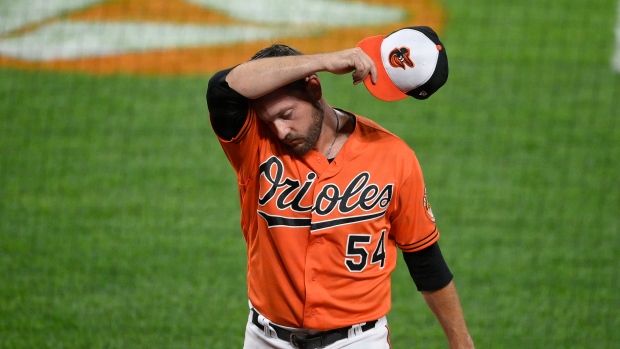 The Baltimore Orioles will get the day off on Monday.

That’s one more day we can add to the counter since their last win on Aug. 2.

Remember three weeks ago when the Orioles hit five home runs at Yankee Stadium and a cat ran onto the field? The Orioles have lost every game since then, 18 Ls in a row.

The Orioles have lost 18 straight games. That’s the longest losing streak in the majors since the Kansas City Royals lost 19 in a row in 2005.

They had a lead in nine of those 18 losses. Baltimore ended up losing all but one of those games by two runs or more.

For as bad as things have been, the Orioles still have a small cushion between them and the all-time MLB record for consecutive losses.

In 1889, the Louisville Colonels lost 26 straight.

So, what are the chances that this Baltimore team matches a losing streak set more than a century ago?

Their next three games will be pivotal.

The Orioles' active 18-game losing streak is the longest in MLB since the Royals lost 19 straight in 2005. pic.twitter.com/qkyJ7bOhb4

The Orioles will host a three-game set against the Los Angeles Angels before welcoming the Tampa Bay Rays to town for three more.

For a little perspective, Baltimore was just outscored 34-8 in a four-game sweep at the hands of the Rays last week.

After that, the Orioles head on the road for three games against the Toronto Blue Jays.

If the Orioles can’t end their slide against the Angels, they will be five losses away from the all-time MLB record heading into back-to-back series with Tampa Bay and Toronto.

Sure, the Orioles are bad at baseball, but this was a phenomenal reenactment of a tragic Renaissance painting. pic.twitter.com/8POKq1w0XK

The bad news – Shohei Ohtani is scheduled to start on Tuesday.

The good news – they also get to face Dylan Bundy and Jose Quintana, who both have ERAs north of 6.00.

With a remaining schedule that is loaded with playoff contenders, there will be ample opportunity to fade the Orioles the rest of the way.

As for the next three days, I’m just interested to see if Baltimore can snap the skid before they have to face the Rays again.

Per ESPN Stats & Info, Cabrera is one of five players ever with 500 home runs and a career batting average above .310.

Toronto was the biggest favourite on the board on Sunday. The Blue Jays have now lost seven of their past nine overall. They were the favourite to win all nine of them.

Toronto’s loss was the biggest of several upsets in the majors on Sunday, as MLB favourites went 7-6.

As of this morning, the Blue Jays have just an 11.2 per cent chance to make the playoffs, according to FanGraphs.

If they ultimately fall short of the postseason, we can point to their inability to win games they are expected to win.

The Blue Jays are back in action tonight in the first of a four-game set against the Chicago White Sox.

Right now, that game is a pick’em.

While fading the Orioles has been fun, backing the Braves and the Yankees has also netted some profitable results.

Atlanta (-170) beat Baltimore 3-1 on Sunday to set a franchise record with their 13th consecutive win on the road.

The Braves have won nine in a row and 16 of their last 18 overall.

With a 3-1 victory over the Orioles, the Braves have a set a franchise-record 13 consecutive wins on the road.

Meanwhile, the Yankees have won nine in a row and 16 of their past 19 overall.

One of those wins streaks will come to an end on Monday when the Yankees visit Atlanta for the first of a two-game set.

New York is now 4.5 games back of Tampa Bay for top spot in the AL East.

With a five-game lead on the Philadelphia Phillies in the NL East, Atlanta enters this week at -430 to win its division.

Sticking with hot streaks, the Los Angeles Dodgers had their nine-game win streak snapped in a 7-2 loss to the New York Mets on Sunday.

Now they will travel to face the San Diego Padres in a three-game set with playoff implications.

The Dodgers, which have won 13 of their past 15 overall, are still 2.5 games back of the San Francisco Giants for top spot in the NL West.

Meanwhile, the Padres have lost nine of 11 and now trail the Cincinnati Reds by one game in the NL wild-card race.

Dodgers have Julio/Buehler/Scherzer going up against a Padres team in shambles.

Not winning this series would be a HUGE letdown.

However, these teams haven’t met since the middle of June, and the Dodgers are a much different looking team right now.

Despite trailing San Francisco by 2.5 games in the standings, LA is still -200 to win the NL West. The Giants are +145 to win the division.

MLB favourites have been on fire since the start of August.

Perhaps we finally start to see some regression this week with some more evenly matched series.

While favourites have dominated in the majors, it’s been the underdogs that have thrived early on this CFL season.

The Saskatchewan Roughriders, which were the biggest favourite so far this season at -10.5 versus the Ottawa Redblacks, were the lone favourite to cover this past week in a 23-10 win.

CFL underdogs went 3-1 SU & ATS in Week 3. Here is a look at how they have delivered through the first three weeks of the 2021 season. #CFLonTSN pic.twitter.com/YedHwrvbqc

CFL underdogs improved to 8-4 straight up and 9-3 against the spread.

Meanwhile, the under improved to 9-3 this season after an even split in Week 3.

The race ended with a remarkable photo finish.

Safe Conduct held off Riptide Rock down the stretch for the win and the $600,000 main prize.

The second leg of the Triple Crown, the Prince of Wales Stakes, is scheduled for Sept. 14 at Fort Erie Race Track.