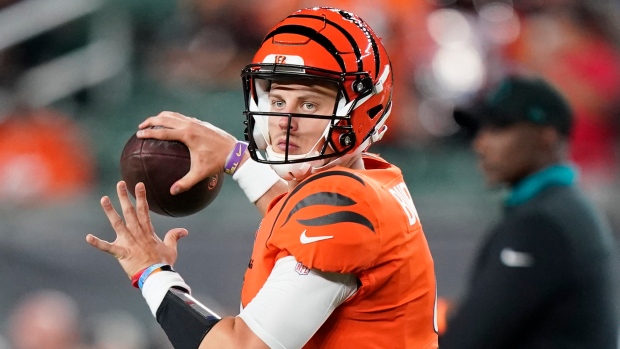 I want to meet the Jaguars’ fan who bet the over.

It would have been difficult enough to watch last night’s collapse without having any money on Jacksonville.

Despite rookie quarterback Trevor Lawrence delivering the best performance of his young career and a 14-0 half-time lead, Jacksonville lost its 19th in a row on Thursday Night Football as the Cincinnati Bengals rallied for the 24-21 win.

While the Jaguars covered as a 7.5-point underdog, that doesn’t mean anything for the bettors that took them to win at least seven games.

An 0-3 start looks that much worse when it includes a loss to the Houston Texans and last night’s collapse against the Bengals.

Anyone who took Cincinnati to win outright on a parlay or in survivor pools were forced to sweat it out, but ultimately got the win.

Meanwhile, if you bet Thursday Night Football on a teaser, you couldn’t lose.

The Bengals got the job done as a -330 money line favourite. The total stayed under 46.

If you bet Cincinnati OR Jacksonville, the over OR the under on a six-point tease, you won.

Joe Burrow threw for 253 yards and two touchdowns in the second half.

Per ESPN Stats & Info, Burrow went 12-of-12 for 143 yards and a TD from empty formation in that second half.

He's 1 of 2 players to complete at least 85 percent of his passes for 250 yards in the 2nd half of a game over the last 2 seasons.

The other was Tom Brady last season against the Chargers. pic.twitter.com/cQh303PAYL

As someone who bet the Bengals first-half team total over 13.5, it would have been nice to see the offence put up some points in the first two quarters.

Still, the outright win means I need the Tampa Bay Buccaneers to win outright on Sunday Night Football to cash the best bet that I gave in this column on Thursday morning.

Though they had a 14-0 halftime lead and battled to the bitter end vs the Bengals Thursday, the #Jaguars again were defeated as they fell to 0-4 early on this season and have not won since Week 1 of 2020. As a result, they now sit tied for the 2nd longest streak on this ugly list pic.twitter.com/hFstVaHQSC

Make sure you check back in this weekend for our TSN Edge best bets column.

The New York Yankees (+130) beat the Toronto Blue Jays 6-2 on Thursday night to tighten their grip on the American League Wild Card.

The Yankees have won 8 of their last 9, and in those games:

Per Statcast, Judge is the first Yankees player with multiple 440-foot home runs in a game since Alex Rodriguez did it in July of 2015. It was his sixth game with multiple home runs this season.

Ray’s odds to win the Cy Young shifted from -600 to -450 following the loss. He’s still the obvious favourite to win the award, with Gerrit Cole as the second choice at +370.

Meanwhile, the magic number for the Yankees to clinch a playoff spot is down to two.

New York’s odds to make the playoffs were cut from -650 all the way to -10000. They’ll close out the season with a three-game set against the Tampa Bay Rays.

Toronto’s odds to make the postseason lengthened from +210 to +380. The Blue Jays will end the regular season with three games against the Baltimore Orioles.

While a series against the worst team in the American League should be a favourable spot for Toronto, the Orioles just took two of three against the Boston Red Sox, including a 6-2 win on Thursday night.

Boston’s odds to reach the playoffs lengthened from -160 to +110. The Red Sox will visit the Washington Nationals for three games to close out their regular season.

Finally, the Seattle Mariners continued to roll with a 4-2 win over the Oakland Athletics.

Seattle has won four in a row and 10 of its last 11 to leapfrog Toronto into a tie with Boston for the second AL Wild Card.

Three games left for each. Yanks at Rays, Red Sox at Nats, Mariners vs. Angels, Blue Jays vs. Orioles.

The Mariners were +700 to make the playoffs on Tuesday morning. As of this morning, Seattle is down to +150 to get into the postseason.

The Mariners will host the Los Angeles Angels for three in a row to close out the regular season.

Week 9 of the CFL season continues tonight with a marquee matchup between the Winnipeg Blue Bombers and BC Lions.

As of this morning, the game is a pick’em.

The total is set at 53.5 – the highest number we have seen for a CFL game so far this season.

It’s an interesting number for two teams that are a combined 9-5 to the under this season.

Winnipeg has won and covered three in a row. Meanwhile, BC is coming off a 31-24 loss to the Saskatchewan Roughriders but is 3-1 SU and ATS in its last four games.

I’ll lean towards the Blue Bombers and the under on Friday Night Football.