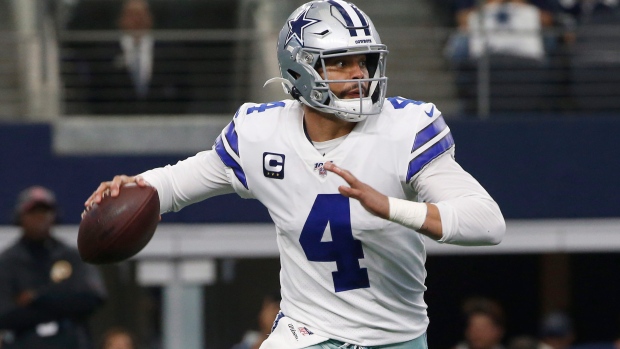 Some 214 days after the Tampa Bay Buccaneers lifted the Lombardi Trophy as Super Bowl champion at Raymond James Stadium, they’ll kick off the 2021 NFL regular season against the Dallas Cowboys tonight on the exact same field.

Tom Brady and the Buccaneers are looking to become the first repeat champion since Brady won back-to-back titles with the New England Patriots in 2003-04.

They’ll open the season as the second choice to win it all again at +650.

The only team with shorter odds is the team Tampa Bay beat in last year’s Super Bowl in the Kansas City Chiefs (+600).

Meanwhile, Dallas is much further down the list of contenders at 29-to-1.

While there is some optimism surrounding quarterback Dak Prescott’s return with the Cowboys as the betting favourite to win the NFC East, bettors are lining up to fade Dallas in tonight’s opener.

The Buccaneers opened -6.5 for tonight’s game, but there has been some significant movement in the lead up to Week 1. That number got as high as -10 at some spots when it seemed like Prescott might not be ready for the opener.

As of this morning, Tampa Bay is an 8.5-point favourite.

The long wait is finally over!!!! The NFL returns to TSN tonight with the regular season kickoff between the defending Super Bowl champion Tampa Bay Buccaneers and the Dallas Cowboys. The Bucs opened -6.5, but are up to -8.5 for the opener. #NFLKickoff pic.twitter.com/XtTfmQXBP8

Prescott, who is the second choice to lead the NFL in passing yards at +500, didn’t play in the preseason and there was some concern after it was reported he was dealing with a shoulder strain.

Dak Prescott threw for 450+ yards in 3 of his 5 games last season. Don’t doubt this dude.

While the Cowboys’ offence is loaded on paper, they’ll be without a couple of key pieces tonight, and are in tough against a very good Tampa Bay defence.

The Buccaneers were the only team in the NFL that finished in the top five in both offensive and defensive DOVA last season, according to Football Outsiders.

A crazy stat on Tom Brady's longevity on the day of his 300th career start: there are 3 active Hall of Famers whose careers began *after* Brady's first start: Troy Polamalu, Calvin Johnson and Ed Reed.

After bringing back every key contributor from last year’s Super Bowl winner, it makes sense that expectations are high for Tampa Bay again in 2021.

I jumped on the Bucs when they opened at -6.5, and I feel even more comfortable with that bet after seeing the line movement.

The Cowboys are up to +8.5, but I still don’t feel like a potential middle of seven or eight points is enough to bet back on Dallas.

TSN EDGE will have a lot more for you throughout the day as we count down to kickoff tonight.

Our biggest season ever kicks off tonight.

Who will raise the Lombardi in LA? #Kickoff2021 pic.twitter.com/0xckfXV2se

Fernandez one win away from US Open final

While the NFL regular season kicks off on TSN1/3, Leylah Annie Fernandez will be in action against Aryna Sabalenka in the US Open semifinals on TSN4 and TSN5 at 7 p.m. ET.

Meanwhile, Fernandez opened at +320 to beat Sabalenka in the semifinals, but that number has been bet down to +260.

As of this morning, Sabalenka is -330 to win that match.

If those numbers hold, a win over Sabalenka wouldn’t even be Fernandez’s biggest upset of the tournament, based on the betting odds.

Leylah Annie Fernandez pulled off ANOTHER impressive upset in the #USOpen quarterfinals. If you placed a $100 wager on Fernandez to win her first match, then carried over and risked the total payout betting her to win every match since, you would be up to $21,586.79 right now. pic.twitter.com/HOXOZjibgI

Fernandez upset Naomi Osaka as a +370 underdog. She also beat Angelique Kerber at +260.

The winner of tonight’s semifinal will advance to play the winner of Emma Raducanu and Maria Sakkari in Saturday’s final.

Regardless of whatever happens next, Fernandez has emerged as a star with her remarkable run in New York.

Who's taking home the title?

For the third round in a row, Djokovic overcame a first-set loss to advance.

Novak Djokovic improves to 12-0 in US Open quarterfinals.

In the Open Era (since 1968), the only man with a better record in quarterfinals at any one major is Roger Federer, who is 15-0 in Australian Open quarterfinals. pic.twitter.com/h1CokFP95J

It was his 26th win in a row, which is tied for the sixth-longest win streak among men in the Open Era.

Djokovic will play Alexander Zverev in the US Open semifinals. Djokovic opened -260 to win that match. The comeback on Zverev is +210.

My latest from New York, where the neighbors to the north have two semifinalists in singles for the first time and the home nation has.....https://t.co/Whv8qH4Znr

Meanwhile, Canadian Felix Auger-Aliassime will clash with Daniil Medvedev in the other semifinal.

Auger-Aliassime is currently a +460 underdog to win that match. Medvedev is -650 to advance.

Djokovic remains the obvious favourite to win the title – his odds shortened from -140 to -160 following the win over Berrettini.

The Toronto Blue Jays (+115) extended their win streak to seven in a row with a 6-3 win over the New York Yankees on Wednesday night.

Marcus Semen hit a two-run single in the fourth. Tied 3-3 in the seventh, Semien scored the go-ahead run on a Teoscar Hernandez single.

Vladimir Guerrero Jr. put the game away with his 41st home run of the season in the ninth.

On the flip side, New York has dropped five straight and nine of its last 11 following a 13-game win streak.

The Blue Jays can further close the gap in the series finale with the Yankees tonight.

Toronto's now a game and a half back of a Wild Card spot. 👀 pic.twitter.com/SO9MhYrjLa

Jose Berrios is scheduled to start for Toronto. The Yankees will counter with Nestor Cortes.

As of this morning, New York is a small favourite at -120 on the money line.

If the Blue Jays managed to pull off the four-game sweep, before heading to Camden Yards for a four-game set against the Baltimore Orioles, the optimism surrounding their playoff chances will hit a new high.

Per FanGraphs, Toronto currently has a 43.6 per cent chance to make the playoffs. That’s up from just 11.2 per cent two weeks ago.