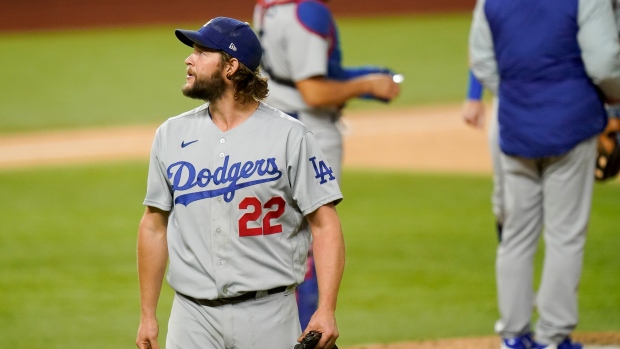 Perhaps we should have seen it coming.

Less than 24 hours after the Los Angeles Dodgers fought their way back into the NLCS with a record-setting performance in a 15-3 win in Game 3, they came crashing back down with a 10-2 loss to the Atlanta Braves in Game 4.

Meanwhile, the Houston Astros are still alive following a walk-off home run from Carlos Correa in a 4-3 win over the Tampa Bay Rays in Game 5 of the ALCS.

Clayton Kershaw’s playoff struggles have been talked about for years, which is why it is easy to pin the blame for Thursday’s loss on his shoulders.

Clayton Kershaw has given up three go-ahead hits in the 6th inning or later since the 2013 postseason, tied with Justin Verlander for the 2nd-most over that span.

Only Aroldis Chapman (5) has given up more. pic.twitter.com/D5oInwZ9wm

However, everybody knew that Kershaw had been scratched from his scheduled Game 3 start because of back spasms and he clearly didn’t look right from the outset in Game 4.

Still, the Dodgers pitcher managed to hold the Braves to one run through five innings before things unraveled for him in the sixth.

Would it have made a difference when the L.A. offence followed up a 15-run outburst with just two runs?

Roberts was among the betting favourites to be the first manager fired earlier this season so, it shouldn’t be a surprise that fans are calling for his dismissal after the Game 4 loss.

We still don’t know who the starter will be for Atlanta in Game 5, which is why the odds for that game are off the board at the time this story will be posted.

Meanwhile, the Braves are 27 outs away from their first World Series appearance since 1999.

Atlanta is now the World Series favourite at +125 odds.

Correa Walks It Off

The Astros continued to battle back into the ALCS with a walk-off homer from Correa in a 4-3 win over Tampa Bay in Game 5.

Carlos Correa now has 3 career walk-off hits in the postseason, tying David Ortiz for most all-time.

There have been 3 walk-off home runs in the last 2 postseasons, all of them have been by the Astros (2 by Correa, 1 by Jose Altuve). pic.twitter.com/kA2W7uNVT9

Houston is just the fourth team in MLB history to force a Game 6 after falling behind 3-0 in a best-of-seven playoff series.

It won’t get any easier for them on Friday night with Blake Snell set to get the start for the Rays in Game 6. Snell held the Astros to one run over five innings in a 2-1 win in Game 1 of the ALCS.

Houston will counter with Framber Valdez.

It will be just the sixth time in men’s lightweight history that three or more world titles will be on the line in one bout.

The 32-year-old Lomachenko is currently listed as a -400 favourite against the 23-year-old Lopez, who is a +275 underdog.

TSN’s Robin Black broke down what makes Lomachenko so special in his latest edition of Artist of Combat.

The Kansas City Chiefs signed running back Le’Veon Bell to a one-year deal on Thursday.

While ESPN’S Jeremy Fowler reported early Thursday that Bell had narrowed his choices to the Chiefs, Buffalo Bills and Miami Dolphins, Kansas City clearly seemed like the best fit in terms of his skill set and an opportunity to win a championship.

Per league protocols, Bell will need to go through five days of COVID-19 testing before he can join the Chiefs for practice. That means he won’t be available for Monday night’s game against the Buffalo Bills.

That will give rookie running back Clyde Edwards-Helaire at least one more game to showcase his skills before Bell joins the team.

While there was a lot of talk about how the move would hurt CEH’s fantasy stock, but I’m willing to take a wait-and-see approach before rushing to any judgments.

Andy Reid and Eric Bieniemy are among the most creative offensive minds in the NFL and I think they find a way to get both running backs their touches. There’s also a chance that we could see CEH and Bell on the field together at times.

While this could hurt CEH’s ceiling in terms of overall usage if Bell stays healthy, it could also help him if he learns from the veteran and becomes more effective on fewer reps.