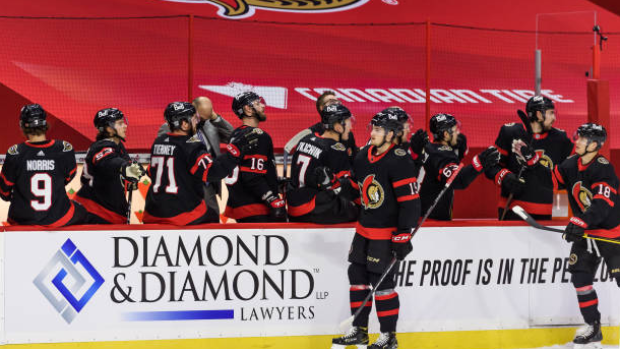 The Ottawa Senators are rolling.

The Senators (+130) beat the Calgary Flames 6-1 on Thursday night for their third win in a row.

It was their fifth win in their past seven games, a stretch that includes upset victories as a +260 underdog over the Toronto Maple Leafs and as a +200 underdog against the Montreal Canadiens.

All of a sudden, fading the Senators is a losing proposition.

I learned my lesson the hard way this week.

Full disclosure, it’s my most important fantasy matchup of the season to date as the current third seed up against the second seed in the pool.

I planned for this matchup ahead of time by setting up a few key pieces in my lineup to fade Ottawa.

On Tuesday night it was Carey Price getting shelled for four goals in a 5-4 shootout loss while Josh Anderson was held off the score sheet and was a minus-1.

Then on Thursday night, I decided to start David Rittich when he got the green light, hoping that the Flames would respond following Wednesday night’s 2-1 loss to Toronto. The Senators hung four on Rittich before he got the hook early in the second period.

Ottawa has averaged 4.67 goals per game over their past three wins.

Drake Batherson is the sixth different @Senators skater age 22 or younger with a four-game goal streak – only one player has extended the run to five. #NHLStats pic.twitter.com/YBl0QFcUbl

Drake Batherson is up to five points over the past seven days.

Brady Tkachuk has four over the past week, while Thomas Chabot, Colin White and Erik Brannstrom have three points each over that span.

With Batherson and company playing so well of late, do I even trust Rittich if he gets the start against them on Saturday night?

At this point, I really have nothing to lose heading into the weekend thanks to the Senators’ strong play this week.

I’m just happy the prices were too out of control to even consider literally betting against Ottawa.

It’s been a brutal week to bet on the Canadiens.

In fact, it’s been an ugly three weeks to bet on them, as Montreal has just two wins in the past nine games.

Maybe I should consider fading the Habs instead?

There was a lot of talk about the coaching change providing a spark for the Canadiens and it did.

The problem is that spark only lasted for a little over a period.

Montreal jumped out to a 3-1 lead only to give up five straight goals in a 6-3 loss to the Winnipeg Jets.

After a stellar showing in the 2020 playoffs, Carey Price had been struggling to find his game even before the #Canadiens hot start to the season faded. Recently though, as shown here, his struggles have gotten worse as his Habs continued their defensive slide on Thursday at WPG pic.twitter.com/SucizIpuV9

As a fantasy hockey manager with Price on his team and desperate for a win in a crucial matchup, watching the Habs fall apart was devastating.

Is it time for the Canadiens to give Jake Allen a few more starts?

Right now, there are more questions than answers in Montreal.

On opening night of the NHL season, the Edmonton Oilers were the second choice to win the North Division behind the Maple Leafs at +450 odds.

Three weeks later, Edmonton’s odds had ballooned all the way to +1100 following a 3-6-0 start.

While it appears Toronto is primed to run away with the division title, it’s worth noting the Oilers are once again the second choice once again at +450 odds.

Mike Smith of the @EdmontonOilers is the second goalie 38 or older in NHL history to begin a season 6-0-0.

Edmonton is still four points back of Toronto in the division with an extra game played.

However, their recent hot streak has sparked just a little more intrigue at the top of the North Division heading into a three-game set between the Oilers and Maple Leafs that begins Saturday night.

The Toronto Raptors will look to snap a two-game slide when they host the Houston Rockets tonight on TSN.

Coming off back-to-back losses to the Philadelphia 76ers and Miami Heat, Toronto is a 7.5-point favourite versus a Houston side that has lost nine in a row.

The Rockets are just 1-8 against the spread over that span, which includes back-to-back blowout losses to the Chicago Bulls and the Cleveland Cavaliers in their past two games.

It really is the perfect get right spot for Toronto.

What could go wrong?

You can catch that game at 7 p.m. ET on TSN4 and TSN5, as well as on TSN.ca, TSN Direct and streaming on the TSN app.