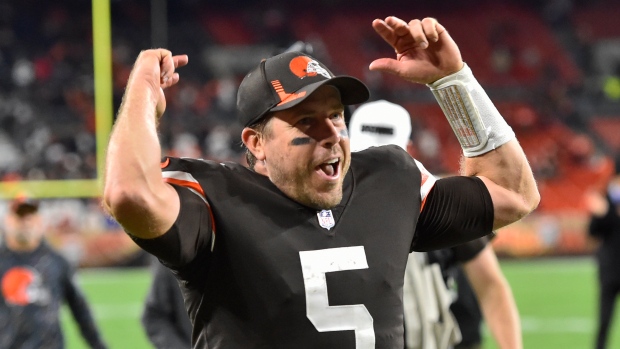 No one is going to tell you that betting on the National Football League is easy unless they are trying to sell you something.

But every so often there are situations in which it’s hard to lose.

That was the case if you wanted to bet a side for Thursday Night Football this week.

As late as Tuesday night, you could have found the Denver Broncos at +4 or better at multiple sports books.

In fact, you could have found the Broncos at +3.5 at some spots on Wednesday afternoon.

Once it was announced that Baker Mayfield was going to miss that game due to injury, that number dipped below three, falling all the way to 1.5 at a couple of spots before settling at Cleveland -2 on Thursday.

If you liked Denver, you could have bet them at +3.5 or better on Monday, Tuesday and Wednesday.

If you liked the Browns, you could have bet them laying less than a field goal on Thursday.

Maybe you bet both. Either of those choices would have been a winner.

Meanwhile, if you teased either side at any point in the week you were in good shape, as long as you didn’t pair it with the over.

The total dropped from 44 to 40 at kickoff and the under still covered by a nine-point margin.

With Mayfield out, Teddy Bridgewater playing hurt, and both teams needing their defences to come up big to scrape out a win on a short week, it would have been a bold move to bet the over – especially when the markets were screaming at us that the under was the right side.

Once again, betting on the NFL isn’t easy, but if you follow along closely enough, every so often an opportunity like the one that presented itself for Thursday Night Football this week will come around.

The biggest story heading into Thursday Night Football was the injury situation for the Browns.

Mayfield was officially out. Nick Chubb and Kareem Hunt were also sidelined.

That’s a ton of big-name injuries.

However, the problem with focusing so much on who was out for Cleveland, is that the guys that were taking their place weren’t getting nearly enough credit.

"We have a great group of guys and they fought their tails off."

Landry, Beckham and Wills all ended up playing.

I haven’t seen anybody say that Case Keenum is a better quarterback than Baker Mayfield. Still, is one game from a healthy Keenum really that big of a drop off from a beat up Mayfield?

D’Ernest Johnson got the opportunity to showcase what he can do in prime time against a short-handed Denver front seven on a short week.

Start the D'Ernest Johnson for AFC Player of the Week campaign now.

He averaged 6.6 yards per carry for 146 yards and a touchdown. That was more than double his over/under of 58.5 rushing yards.

Mayfield, Chubb and Hunt are integral pieces in the Cleveland offence.

However, in this specific situation, Keenum and Johnson were able to do enough to beat a Denver side that has now lost four in a row following a 3-0 start to the season.

As I mentioned above, if you were paying attention to the line this week you had the opportunity to bet both sides at different points for a considerable middle.

However, that won’t always be the case and when it comes to betting on the NFL, it’s more important to focus on who is playing than who isn’t.

Chris Taylor hit three home runs to help the Los Angeles Dodgers (-135) avoid elimination with an 11-2 win over the Atlanta Braves in Game 5 of the NLCS on Thursday night.

It was Chris Taylor's Game 5. 🔥 pic.twitter.com/UrizWHMODh

Atlanta jumped out to a 2-0 lead in the first inning, but the Dodgers responded with 11 unanswered runs for just their third win in 27 instances all-time in which they trailed by multiple runs in an elimination game.

All three of those wins have come against the Braves in the NLCS over the past two seasons.

That’s now four straight losses in potential series-clinching games in the NLCS for Atlanta, which is two shy of matching the all-time LCS record.

The Dodgers were +380 to win the NLCS heading into Game 5.

After everything that happened leading up to last night’s game, it was only fitting that Jesperi Kotkaniemi would score his first goal as a member of the Carolina Hurricanes (-130) in a 4-1 win over the Montreal Canadiens.

Kotkaniemi scored 9:23 into the third period to give the Hurricanes a 3-1 lead.

Meanwhile, Montreal was held under its team total for the fifth straight game and fell to 0-5 this season.

The Canadiens will try again for their first win of the season when they host the Detroit Red Wings on Saturday night.

Full marks to the Hurricanes’ social media team, which was relentless following the win.

He’s up to 11 points in the first four games of the season.

McDavid entered the season at +200 to win the Hart Memorial Trophy. You can still find him at +150 to win that award.

Meanwhile, the Oilers were +500 to win the Pacific Division entering the opening night. Following the 4-0 start, they are down to +310 to win the division.

The Vegas Golden Knights remain the favourite to win the division at -155.