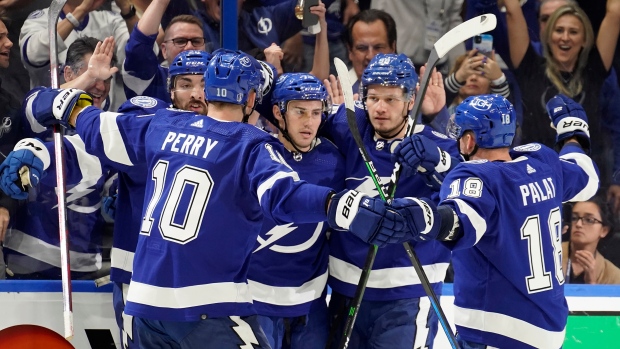 The Tampa Bay Lightning looked like the two-time defending Stanley Cup champions once again in a 7-3 win over the Toronto Maple Leafs on Sunday night.

As has been the case in each of the first four games of the series, the winner has looked to be in complete control from start to finish.

While the series is now tied at 2-2, each of the first four games has been decided by two goals or more.

Tampa Bay extended its NHL-record win streak with its 17th playoff win in a row following a loss.

No other team in league history has won more 10 playoff games in a row following a loss.

After another lopsided result in Game 4, the question now is how will the Lightning and Maple Leafs respond in Game 5 in Toronto on Tuesday night?

At FanDuel Sportsbook, the adjusted series prices look very similar to the numbers we got before Game 1.

Here’s the TSN EDGE Morning Coffee for Monday May 9th, 2022.

The Maple Leafs were a -122 favourite to advance to the second round entering Game 1 versus Tampa Bay.

Basically, if you’re still confident that the Maple Leafs will win the series following last night’s loss, you can get them at the second-best price they’ve been available at all season right now.

On the flip side, if you think the two-time defending Stanley Cup champion Lightning has what it takes to win two of the next three, you can get them at close to even-money at FanDuel Sportsbook.

Tampa Bay, which entered the series at +100 to advance to the second round, was -108 to move on entering Game 3.

As somebody that is sitting on a ticket with the Maple Leafs not to advance to the second round at +110, I’ll need Tampa Bay to win Game 5 on the road in order to set up a scenario where I can’t lose entering Game 6.

The Lightning are now 17-0 with a plus-39 goal differential coming off a loss over the last three postseasons.

.@MarkHMasters joins @JayOnrait to explain why Sheldon Keefe spoke to Jack Campbell for so long before pulling him. pic.twitter.com/8zry5VS683

However, they’re 0-2 and have been outscored a combined 10-2 in the other two games in this series, setting up what should be an electric finish.

I’m sure all of that “nervous energy” in Toronto that we heard about before the series opener will hit a new high ahead of Game 5 on Tuesday night.

“The turning point was the opening faceoff…”@CraigJButton on the Leafs stumbling hard out of the gate in Game 4: https://t.co/H5E2ewLgy1#TSNHockey | #StanleyCup pic.twitter.com/s5xtz5bw2y

Looking at the updated odds at FanDuel Sportsbook this morning, the Maple Leafs are -126 on the money line.

Looking at the adjusted series prices at FanDuel Sportsbook this morning, the Blues are +110 to advance to the second round tied 2-2 heading to Minnesota for Game 5.

The Wild are still -132 to win the series with home-ice advantage entering what is now a best-of-three.

A FIVE point afternoon from Brad Marchand gives the Bruins (-106) the Game 4 win and this series is tied.👀

After trailing 2-0 in the series, the Bruins head back to Carolina at +100 to advance to the second round tied 2-2.

Sliding into a new week. 🍝 pic.twitter.com/WMdHADBS0M

“There wasn’t an area of the ice where the Kings weren’t applying the pressure…”@CraigJButton breaks down the Oilers’ loss in Game 4: https://t.co/pK7sqNFeSi#TSNHockey | #StanleyCup pic.twitter.com/YcAsn7kxTE

Edmonton is still -220 to win the series.

After being handily defeated in Game 3, the Kings flipped the script on the Oilers in Game 4, shutting them out and tying up the series.@TSNRyanRishaug on what the difference was that led to the reversal: https://t.co/rMsMlKmxNz#TSNHockey | #StanleyCup pic.twitter.com/BuMEbFs1iw

A couple of other key trends to keep an eye on in the NHL entering tonight’s action.

With all four lower seeds winning on home ice on Sunday, home teams are now 18-10 straight up this postseason.

Eight of the last nine playoff games have gone over the total, including three of the four games on Sunday.

The third period total has gone over in 12 straight games dating back to Friday night.

It wasn’t just the home teams in the NHL that took care of business on Sunday, either.

The winning team has covered in all four games in that series.

The 76ers are now +124 to win the series at FanDuel Sportsbook.

Despite dropping both games against Joel Embiid, Miami remains the favourite to advance to the second round at -146.

Our fans will go the distance 😳 pic.twitter.com/Us85I42Ge1

The Mavericks are now +190 to advance to the second round.