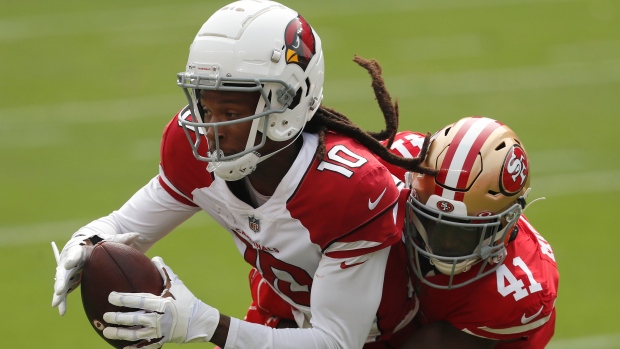 The first NFL Sunday of the season is in the books.

It’s one that will be remembered for a long time. After all, it wasn’t so long ago that it seemed unlikely at best that the NFL would feature a full 13-game slate on its opening weekend.

The fact that the games went ahead as scheduled without incident is a testament to all of the hard work the players, organizations and every single staff member for all 32 franchises put in to make it happen.

It’s something that none of us will take for granted ever again.

NFL Sunday Week 1 Is In The Books

Sunday’s NFL favourites went 6-6 both straight up and against the spread (SEA at ATL was a PK).

The Jacksonville Jaguars, Arizona Cardinals and Washington Football team pulled off the biggest upsets. That created a lot of headaches for anybody who picked the Indianapolis Colts, San Francisco 49ers or Philadelphia Eagles in Survivor Pools or elsewhere.

Perhaps it’s a coincidence that Sunday’s biggest upset happened in the only stadium that allowed fans.

Gardner Minshew completed 19-of-20 pass attempts for 173 yards and three touchdowns as the Jaguars shocked Indianapolis with a 27-20 win at TIAA Bank Field.

Jaguars’ QB Gardner Minshew is the first player to ever throw at least three TD passes and complete at least 95.0 percent of his passes on Kickoff Weekend. In his last two games against the Colts, Minshew has completed 46 of 59 passes for 468 yards, six TDs and one INT.

Jacksonville (+310) improved to 6-0 in its past six home games against the Colts. Indianapolis has now lost seven straight season openers – the longest active streak in the NFL.

Words can’t describe how happy I am to be part of this organization #Grateful https://t.co/yBm9TFTbw6

DeAndre Hopkins more than lived up to the hype with a career-high 14 receptions for 151 yards in his Cardinals debut – a 24-20 win over the defending NFC champion 49ers.

Kyler Murray topped 100 rushing yards for the first time in his career, only to lose nine yards off that total with a couple of kneel-downs late in the fourth quarter. The second-year quarterback threw for 230 yards and a touchdown with one interception in the victory.

Ron Rivera and the Washington Football Team rallied from a 17-0 deficit to pick up a 27-17 win over the Eagles.  Washington sacked Carson Wentz eight times and scored 27 unanswered points to come out on top in Rivera’s debut as head coach.

Perhaps it was retribution in the rematch of last year’s Week 1 matchup, when Philadelphia rallied from a 17-0 deficit to win that game 32-27.

Washington and Arizona will meet in Week 2, which means one of those teams will likely improve to 2-0 to start the season.

Meanwhile, if you backed the Detroit Lions, Cincinnati Bengals or bet against Cam Newton in Week 1, You Got Screwed!

While both the Lions and Bengals suffered bad beats, the New England Patriots were clearly the better team in their 21-11 win over the Miami Dolphins.

Newton, the 2015 NFL MVP, ran for 75 yards and two touchdowns on 15 attempts – the most rushing attempts ever by a Patriots quarterback. The performance answered any questions about Newton’s health heading in to the 2020 season.

Next up for New England is a trip to Seattle to face Russell Wilson and the Seahawks in Week 2.

Meanwhile, Tom Brady got off to a rough start with the Tampa Bay Buccaneers in a 34-23 loss to the New Orleans Saints.

Brady threw a pair of interceptions, including a pick-six – his third straight game with a pick-six dating back to last year’s playoffs.

Drew Brees improved to 4-2 all-time head-to-head with Brady. Brees is the only quarterback that owns a winning record against Brady after facing him at least four times in the regular season.

Week 1 of the NFL season wraps up with a Monday Night Football doubleheader on TSN 1, 3 and 4.

First up, Ben Roethlisberger and the Pittsburgh Steelers (-6) visit Daniel Jones and the New York Giants.

Then it’s Ryan Tannehill and the Tennessee Titans (-3) taking on Drew Lock and the Denver Broncos in the late game.

A Rally For The Ages

While football fans were locked into a full slate on Sunday, tennis fans were treated to a historical comeback at Flushing Meadows.

Thiem became the first player to come back from two sets down to win a major final since 2004, and the first to do it in a US Open final since 1949.

It had to be like this - my career was always like the match today - many ups and downs and I love the way it turned out. pic.twitter.com/ksFDgIfws8

Speaking of comebacks, Nikola Jokic scored 34 points with 14 rebounds as the Denver Nuggets rallied from down 19 to beat the Los Angeles Clippers 111-98 and force a Game 7 in the Western Conference Semifinals.

With the win, Denver improved to 5-0 in elimination games this postseason.

According to ESPN Stats & Info, the Nuggets are the first team to record three 15-point comebacks when facing elimination in a single postseason in the play-by-play era (1997).

Jamal Murray chipped in 21 points, five assists and five rebounds. After the game, Murray gave all the credit to Jokic.

Nuggets’ Jamal Murray on Nikola Jokic after Game 6 win over Clippers: “He’s hitting step backs, fading away, off one leg, with a hand in his face, consecutive times. I’d say he’s the best player in the world... It was a team effort but Jokic definitely carried us.” pic.twitter.com/aeTCmU7YNx

On the flip side, the Clippers fell to 0-7 all-time with a chance to clinch a Conference Finals berth.

Despite coming off back-to-back losses, Kawhi Leonard and company opened as a seven-point favourite for Game 7 on Tuesday.

Lightning Push Isles To The Brink

If you didn’t watch hockey on Sunday, you’re forgiven. Neither did I.

Tampa Bay’s top line of Nikita Kucherov, Brayden Point and Ondrej Palat combined for six points in a 4-1 win over the New York Islanders in Game 4.

Kucherov and Point are now tied with Nathan Mackinnon of the Colorado Avalanche for the most points in these playoffs with 25.

The Lightning are one win away from their first Stanley Cup Finals appearance since 2015. Tampa Bay will have a chance to advance with Game 5 on Tuesday.

First up, the Dallas Stars can advance with a win over the Vegas Golden Knights in the Western Conference Finals on Monday night.

The under has hit in each of the first four games of that series, with the Stars and Golden Knights combining for three or fewer goals in three of them.