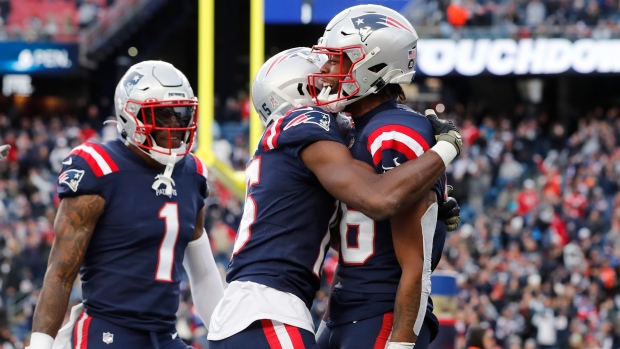 Entering Week 7, the New England Patriots were 100-to-1 to win the Super Bowl.

Four weeks later, New England is a top-10 choice to win it all.

Bill Belichick’s team was completely overlooked following a 35-29 overtime loss to the Dallas Cowboys that left them at 2-4 overall.

New England has outscored the opposition by a combined 100 points over the past four weeks.

The Patriots will look to extend their win streak to five in a row when they visit the Atlanta Falcons on Thursday Night Football.

Is New England a legitimate playoff contender? Yes, according to the oddsmakers.

As of this morning, the Patriots are -260 to make the playoffs.

That number will drop even lower if New England can continue its dominance of the Falcons tonight on TSN.

In honor of the Patriots playing the Falcons for Thursday Night Football tomorrow, we had to do it. Sorry Falcons fans! 😬

New England is one of two remaining teams that are still undefeated on the road, and the public loves them to stay perfect tonight in Atlanta.

The Patriots opened as a six-point favourite, but that number touched seven at some spots before settling at 6.5.

The New England Patriots rounding into form in November and looking like one of the most balanced teams in the NFL? pic.twitter.com/QAMxg2UI5S

On the flip side, the Falcons are coming off a 43-3 blowout loss to the Cowboys.

Atlanta has covered three straight following a straight up loss, and the sharp money on Atlanta +7 signalled they thought that number was too high.

Still, the Patriots are 12-1 ATS in their last 13 games coming off fewer than six days rest, thanks in large part to Belichick, whose team has looked better with every passing week.

I lean towards New England winning and covering on the road tonight, but I’ll have more on that in a minute.

I have called 4 Super Bowls, this one will be my 5th. The Patriots have been in every one. Just saying…

First, let’s look at how tonight’s game impacts the playoff picture for both teams.

As mentioned above, the Patriots are currently -260 to make the playoffs and +205 to miss them.

According to ESPN’s Football Power Index, New England currently has an 83 per cent probability to make the postseason.

I think they win at least four of those games to get to 10 wins and make the playoffs.

At this point, the problem is that there’s no value betting the Patriots to make the playoffs at -260 – that ship has sailed.

Hey AFC, Patriots are back. Hope you took advantage of the last 12 months.

On the flip side, Atlanta is currently 4.4 per cent to make the playoffs. A win would raise that probability to 8.7 per cent, while a loss would drop it to 2.5 per cent.

As of this morning, the Falcons are +420 to make the playoffs. That’s not a bet that I would make.

Now, while I lean towards the Patriots tonight, I’ll go the player prop route for my best bet and take Kendrick Bourne to go over 33.5 on his receiving yards prop.

AIR BOURNE. @BournePoly11 went and got it for the TD!

I’ve played Bourne’s receiving yards prop a few times already this season, looking to capitalize on a low number for the Patriots’ best option for stretching the field vertically with speed.

I think he delivers again tonight against a suspect Falcons’ secondary, so I’ll make Bourne over 33.5 receiving yards my best bet for Thursday Night Football.

Ray became the fourth different Toronto Blue Jays pitcher to win the award and the first since Roy Halladay in 2003.

It’s a remarkable turnaround for a pitcher who wasn’t even listed by sports books as a Cy Young award contender at the start of the 2021 MLB season.

Ray could be found as high as 80-to-1 to win the Cy Young as recently as July, and he closed as the favourite to win that award at -280 on the final day of the regular season.

Burnes was another dark horse Cy Young contender as he opened the season at 45-to-1 and closed at +100 on the final day of the regular season.

NBA favourites went 9-2 straight up on Wednesday night, although they went just 6-4-1 against the spread.

The Detroit Pistons beat the Indiana Pacers 97-89 as a six-point underdog.

Meanwhile, the Toronto Raptors are back in action tonight following a couple of days off as they visit the Utah Jazz.

Toronto has lost five of its past six to fall to 7-8, failing to cover in each of those five losses.