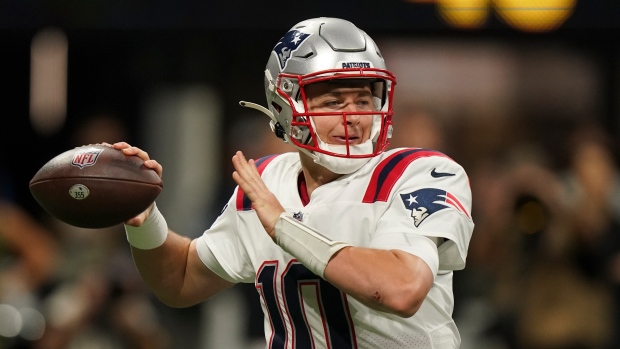 On a night in which one U.S. sports book lost more than $1 million when Shohei Ohtani was named the unanimous American League MVP, bettors that took a chance on the New England Patriots to win the Super Bowl at long odds were dreaming of a chance to cash in.

Ohtani opened at 60-to-1 to win AL MVP back in February.

Before Opening Day, a #CaesarsSportsbook bettor took Shohei Ohtani to win the MVP at +3000 at @CaesarsPalace 🤯

Fast-forward to the end of the season, and Ohtani closed as the overwhelming favourite to win AL MVP at -10000.

While the numbers paid out on the Ohtani to win MVP prop are unprecedented, that story has only fueled the conversation surrounding whether we will see a long shot win the Super Bowl this season.

The Patriots have been a popular bet over the past five weeks, and their futures were on the move once again following an impressive blowout win over the Atlanta Falcons on Thursday Night Football.

The Patriots shut out the Falcons 25-0 as a seven-point favourite on Thursday Night Football.

Mac Jones went 22-of-26 for 207 yards with a touchdown and an interception.

Mac Jones is the 1st rookie QB in NFL history to complete 80% of his passes in back-to-back games (min. 15 attempts).

He has a total of eight incompletions over his last two games combined.

Meanwhile, the New England defence recorded a shutout for the third season in a row, holding Matt Ryan to 19-of-28 for 153 yards and two interceptions.

The Patriots also intercepted Josh Rosen and Feleipe Franks, as Atlanta became the first team since the Los Angeles Chargers in 2000 to have three different quarterbacks intercepted in the same game.

The Falcons are the first team since the 2009 Texans to have 3 players throw an interception in the same game (Matt Schaub, Rex Grossman, Chris Brown).

The last team to have 3 QBs throw an interception in a game was the 2000 Chargers (Ryan Leaf, Jim Harbaugh, Moses Moreno). pic.twitter.com/v18Ys1fhcB

Did I mention that the Falcons passed on the quarterback that beat them in this year’s draft?

Per ESPN Stats & Info, that +125 point differential is the second-best over a five-game span for a team with a rookie quarterback since 1950.

We weren't going to mention it but...

As highlighted in Thursday’s column, the Patriots’ futures continue to move.

New England could be found as high as 100-to-1 to win the Super Bowl following its 2-4 start.

Entering Thursday Night Football, they were +2700 to win it all.

After clinching their fifth straight victory to improve to 7-4, the Patriots are now +1700 to win the Super Bowl.

That’s a remarkable shift for a five-week stretch.

Here’s some other futures movement to consider.

New England went from +4000 to win the AFC Championship entering Week 7 to +850 this morning.

The Patriots can take over first place in the AFC East with a Bills loss to the Colts on Sunday. They now have the meat of their schedule coming up:

vs. Titans
at Bills
Bye
at Colts
vs. Bills

Regardless of what you think about their chances to win it all at this point, there’s no doubt now that the Patriots are better than a 100-to-1 long shot.

After an unprecedented season, Ohtani became just the fifth player since 2000 to win the MVP unanimously.

Shohei Ohtani is your unanimous American League Most Valuable Player!

Ohtani is also just the ninth player in MLB history to win MVP on a sub-.500 team.

Three of those nine MVP awards handed out to players on sub-.500 teams have gone to the Los Angeles Angels over the past six years, with Trout winning the other two.

Shohei Ohtani is the only player in @MLB history to do what he did in 2021. pic.twitter.com/hkVwyueCYh

Toronto Blue Jays slugger Vladimir Guerrero Jr. finished second after hitting 48 home runs, which are the most by a player 22-years-old or younger in a single season in MLB history.

Guerrero finished the season at +1500 to win MVP, which is a testament to Ohtani being the overwhelming favourite.

NHL Favourites Sweep The Board

Three of them needed a shootout to get the job done.

Six of the 11 favourites covered the puck line.

Jacob Markstrom stopped all 27 shots he faced for his league-leading fifth shutout of the season as the Calgary Flames (-200) blanked the Buffalo Sabres 5-0 as the biggest favourite on the board.

Jacob Markstrom turned aside all 27 shots he faced to earn his NHL-leading fifth shutout of the season.#NHLStats: https://t.co/hsQIquNqTN pic.twitter.com/yIPjdZXuEr

Sidney Crosby scored his first goal of the season as the Pittsburgh Penguins (-164) beat the Montreal Canadiens 6-0.

Montreal has lost four straight and seven of its last eight.

Meanwhile, the Edmonton Oilers snapped their slide against the Winnipeg Jets with a 2-1 win in a shootout.

The Oilers (-150) had dropped five in a row versus Winnipeg dating back to last year’s first-round playoff sweep before prevailing in the shootout last night.

Oh, and Connor McDavid did it again.

Must See: Watch as Connor McDavid dances through the Jets defence to score - https://t.co/FUjGNgcxOE#TSNHockey pic.twitter.com/OixpcNvAun

Stephen Curry scored 20 of his game-high 40 points in the 4th quarter as the Golden State Warriors rallied to beat the Cleveland Cavaliers 104-89.

With 9 threes tonight, Stephen Curry breaks his own record for most threes made by a player in his first 15 games of a season.

The Warriors trailed Cleveland by 13 points entering the final frame.

They outscored the Cavaliers 36-8 in the 4th quarter to win and cover as a 9.5-point favourite.

Stephen Curry drops 20 of his 40 points in the 4th quarter, leading the @warriors on a 36-8 closing run!

It was another check mark on Curry’s early season MVP resume.