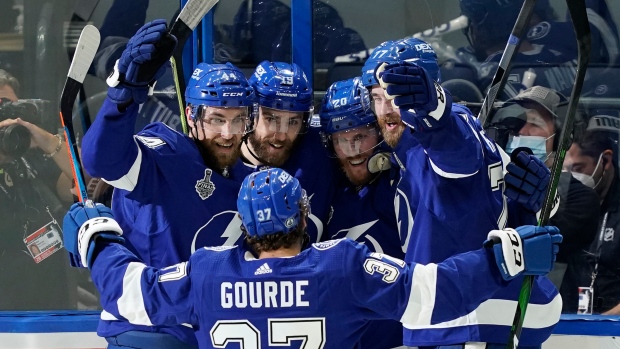 The Montreal Canadiens reached the Stanley Cup final as an underdog in every single round of these playoffs.

If Game 1 against the Tampa Bay Lightning is any indication, this will be their toughest test by far.

The Lightning struck first with a 5-1 win over Montreal in the opener of Stanley Cup final on Monday night.

While the Habs had longer odds to beat each of the Toronto Maple Leafs and Vegas Golden Knights, Game 1 versus Tampa Bay was easily the most lopsided game that they have been on the wrong side of so far this postseason.

The Lightning were -270 to win the Stanley Cup entering Game 1.

That number represents a 73 per cent implied win probability.

After a dominant win in the opener, Tampa Bay is now -700 to win the series – an 87.5 per cent implied win probability.

Anyone who watched Game 1 won’t be surprised.

Nikita Kucherov and Brayden Point delivered a dominant performance, combining for six points in the win.

From @JohnLuTSNMtl & @jenniferhedger: Getting Brayden Point’s line away from Phillip Danault’s line and bringing the physicality was key for Lightning in Game 1 - https://t.co/qSidbGndmH#TSNHockey | #StanleyCup pic.twitter.com/adB4tjJcHB

The Lightning controlled possession, firing 28 shots at Carey Price from the slot, including four that ended up in the back of the net.

The Habs struggled to generate quality chances at the other end of the ice, and when they did the Conn Smythe Trophy favourite Andrei Vasilevskiy was there to turn them away.

Vasilevskiy stopped 18 of the 19 shots he faced – the lone blemish was a double-deflection off a slap shot from the point that changed directions twice before finding the back of the net.

As of this morning, Vasilevskiy is now even-money to win the Conn Smythe Trophy.

Doing it in just 19 games, Nikita Kucherov's 2G-1A effort in a @TBLightning win on Monday has put him at the 30-playoff point mark for a 2nd straight season. The remarkable production has put him with the 2 most dominant scorers in NHL history on this list of consecutive PO years pic.twitter.com/HvmwwC3v2s

Teams that win the opener of best-of-seven Stanley Cup Final have gone on to win the series 75 per cent of the time (61-20).

Of course, Montreal lost the opener of its Stanley Cup semi-final versus Vegas, only to win four of the next five to advance.

Still, there aren’t many positives for Habs’ fans to take from Game 1.

While they beat both the Maple Leafs and Golden Knights at longer odds, winning four of the next six versus Tampa Bay will undoubtedly be the toughest test of the playoffs for the Canadiens.

Paul George scored a playoff career-high 41 points as the Los Angeles Clippers beat the Phoenix Suns 116-102 to avoid elimination in Game 5 of the Western Conference finals on Monday night.

Context for Clippers win vs Suns in Game 5:

Clippers now have 7 wins when trailing in a playoff series, the most in a single postseason in NBA history

Paul George is the 2nd player with 40 points, 10 rebounds, 5 assists and 75% shooting in a playoff game, joining Patrick Ewing. pic.twitter.com/Rb5k00pgpB

It was the Clippers’ seventh win in these playoffs when trailing in a series, which is the most such wins by any team in a single postseason in NBA history.

After rallying from down 2-0 to advance in each of the first two rounds, could George and company actually win three straight without Kawhi Leonard to advance to the NBA Finals?

Switzerland was a +7000 long shot to win EURO 2020 when the tournament kicked off earlier this month.

France was the betting favourite to win it at +450.

So when France went up 3-1 on Switzerland in the 75th minute of their Round of 16 showdown, it seemed as though that matchup would play out exactly as expected.

Switzerland rallied with two goals in the final 10 minutes to tie it at 3-3 and force extra time.

After holding off France until penalty kicks, the Swiss buried all five of their chances to clinch a 5-4 shootout victory.

According to ESPN’s win probability model, France had a 99.2 per cent chance to win before Switzerland rallied.

Meanwhile, Switzerland’s next opponent was nearly the victim of a similar upset earlier in the day.

Spain led Croatia 3-1 before conceding consecutive goals in the final minutes of regulation.

Trailing by two goals, Croatia was +1600 just to force a draw through 90 minutes.

While they managed to tie it, Croatia wasn’t able to complete the upset.

Spain rallied with a pair of goals in extra time for the 5-3 win, becoming the first team in tournament history to score five goals in consecutive matches.

ALVARO MORATAAAAAAA!!!! Spain is up once more! 🇪🇸 #EURO2020 pic.twitter.com/FPJgMK96tS

Spain was -250 to reach the quarter-finals when the tournament kicked off – the shortest odds of any team.

The Round of 16 wraps up this afternoon on TSN with a heavyweight bout between England and Germany, followed by Sweden versus Ukraine.

Djokovic advances, Tsitsipas out at Wimbledon

Novak Djokovic rolled to a 16-0 all-time record in opening matches at Wimbledon with a four-set win over Jack Draper.

Djokovic, who entered the tournament as the consensus favourite at -125, is now -175 to win his third major in a row.

Part of that adjustment might have to do with the fact that Stefanos Tsitsipas, who was the third choice to win the tournament, was upset by Frances Tiafoe in straight sets.

TSN’s exclusive live coverage of Wimbledon resumes this morning across the network.