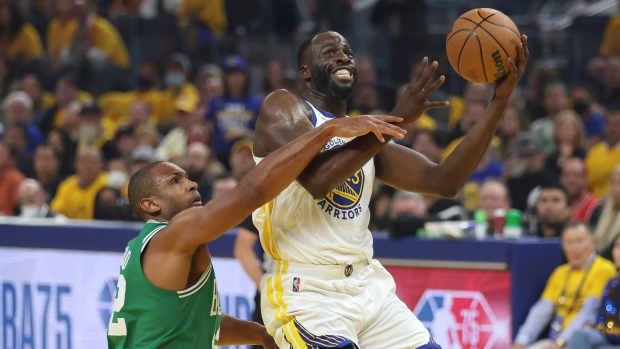 The Boston Celtics are two wins away from clinching their first NBA championship since 2008.

They can put the Golden State Warriors on the ropes with a win on their home floor tonight.

Meanwhile, the Warriors have been at their absolute best following a loss in these playoffs.

Golden State is 5-0 coming off a loss this postseason and has outscored its opponents by an average of 15.4 points per game in those victories.

Still, FanDuel Sportsbook currently has Boston as a four-point favourite for Game 4 tonight.

Can the Warriors pull off the road upset and send the series back to California tied 2-2?

I wouldn’t bet on it.

Celtics A Favourite To Go Up 3-1 In NBA Finals

The Celtics were -110 to win the NBA championship at FanDuel Sportsbook entering Game 3.

As highlighted above, Golden State is perfect following a loss this postseason.

Still, FanDuel has the Warriors at +142 to win tonight and +185 to win the series with a chance to tie it at 2-2 heading back to California for what would become a best-of-three.

"They beat us up and outplayed us. Tip the hat for their performance in Game 3, and it’s our turn tomorrow to swing the momentum back in our favor."

I speculated in Thursday morning’s column that the public would be all over Golden State to bounce back.

However, Steph Curry suffered an injury that he compared to a less severe foot sprain he suffered in March, which led to him missing the final month of the regular season.

There is optimism today on Warriors star Stephen Curry’s status for Game 4 of the NBA Finals vs. Boston on Friday, sources tell @TheAthletic @Stadium. It appears Curry won't need MRI, has avoided major issue with his left foot, and will attend Golden State's afternoon practice.

This injury might not be as bad, but the fact that the Warriors’ best player by far won’t be at 100 per cent tonight should be a concern for anybody interested in backing Golden State.

Curry and Klay Thompson combined for 56 points in Game 3.

The Warriors lost by 16.

The Celtics have held their opponents under 50 per cent shooting in 17 consecutive playoff games.

Who steps up for Golden State if Curry isn’t at his best tonight?

On the flip side, Boston is up 2-1 in the series despite Jayson Tatum shooting just 33.9 per cent from the field.

We can’t expect to sit back tomorrow night just because we’re home. Instead, we’ll be looking to come out with the same hunger we had in Game 3. pic.twitter.com/EmKlRxFeZO

Tatum still leads all players with 25 assists in the series, and if he can start hitting some shots then it will make the Celtics that much tougher to beat tonight.

NBA favourites are 56-28 straight up this postseason, including the play-in.

After they won and covered for me in Game 3, I’m going to double down on Celtics -4 tonight.

Lightning One Win Away From Stanley Cup Final

Trailing the New York Rangers 2-0 in the Eastern Conference Finals, the Tampa Bay Lightning were +210 to win the series at FanDuel Sportsbook.

After stringing together three consecutive wins, Tampa Bay is now -490 to win the series at +195 to win the Stanley Cup.

The @TBLightning have won 3 straight after falling behind 2-0 in the Eastern Conference Final.

They are 1 win away from overcoming a 2-0 deficit to win a best-of-seven series for the 2nd time in franchise history (2003 Conf Qtrs vs Capitals). pic.twitter.com/3Td2GmhWYt

Ondrej Palat redirected the eventual game-winner past Igor Shesterkin with under two minutes to go in regulation.

Hagel to score and the Lightning to win was +560.

“How many times have we heard Victor Hedman being the difference maker? This time it was Mikhail Sergachev…”@CraigJButton on the key factor for Tampa in their Game 5 go-ahead win: https://t.co/tFmvfsVkDo#TSNHockey pic.twitter.com/54uOR1Pw89

As somebody that bet on the Colorado Avalanche to beat Tampa Bay as my exact outcome of the Stanley Cup Final, I questioned whether I should bet on New York to win the East when they went up 2-0 in the series.

Instead, I bet Lightning money line in all three games since and now feel pretty good about my position as the series shifts back to Florida for Game 6 on Saturday night.

Rene Paredes kicked the eventual winner as the Stamps (-3.5) win but fail to cover, beating Montreal 30-27!

Ka’Deem Carey led the way for the Stampeders with 90 all-purpose yards and two touchdowns.

The Stampeders were -200 on the money line.

Montreal covered as a 3.5-point underdog.

Considering the two teams combined for 38 points in the first half, I was just happy to earn the split with my first two picks of the CFL season.

Looking ahead to tonight’s game, FanDuel has the Winnipeg Blue Bombers as a 9.5-point favourite for their home opener.

While I’m usually tempted to take the points with the underdogs early in the season, that won’t be the case for me with Ottawa tonight.

The @CFL season has finally arrived!! 🍁🏈

Winnipeg is the favourite to win the Grey Cup AGAIN this year! Will the Bombers pull off the three-peat? pic.twitter.com/MDXUV69lKH

The defending Grey Cup champions went 11-3 straight up last season, including a perfect 7-0 SU at home.

They return as the Grey Cup favourite this season, and IG Field should be absolutely rocking tonight.

Instead of laying the points with Winnipeg, I’ll double down on the total and play under 47.5.

Last season, eight of the first nine games stayed under the total.

Only one of those games featured more than 43 points.

It’s a new season with new rules and plenty of roster changes, but the Blue Bombers and Redblacks went a combined 5-1 to the under out of the gate last season, so I don’t mind taking a chance with one unit on the under.