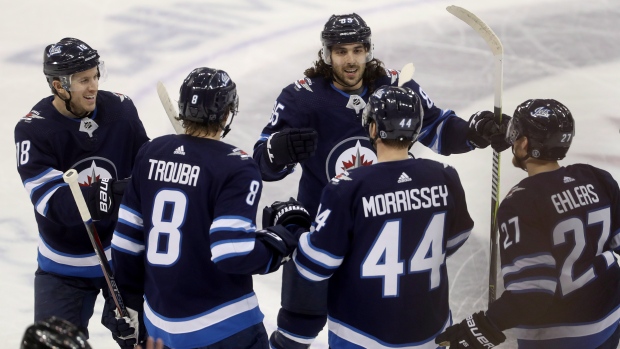 Morrissey returned from a lower-body injury to score the early winner and added two assists as the Winnipeg Jets routed the visiting Philadelphia Flyers 7-1.

"I woke up this morning, felt awesome, came to the rink and went through the routine and everything was good to go," said Morrissey, who extended his point-scoring streak to three games.

Winnipeg weathered an early Philadelphia push, as the Flyers outshot the Jets 10-1 through the opening seven minutes, and 17-6 in the first period.

"Some nights you come out super hard and all of a sudden you start to lose momentum as the game goes on," said Morrissey. "Some nights it looks like tonight."

"Once we started skating and getting on the forecheck and putting more pucks to the net — when we do that we can get second and third opportunities and get some zone time, and we started to roll."

Jets goaltender Connor Hellebuyck helped thwart the early Flyers onslaught, with 16 of his 36 total saves coming in the first period. The win was Hellebuyck's 13th of the season.

"Something about those afternoon games just suits me," said Hellebuyck. "I like waking up and having no down time. I feel very energized, not really skating in the morning, not doing much. Just coming to the rink and excited to play."

Jets defenceman Tyler Myers praised the play of his goaltender.

"There were a few of them that were big-time saves," said Myers, who also scored. "(Hellebuyck) is a guy that you feel very comfortable back there with, whenever you make a mistake. He was able to allow us to kind of get our feet under us after the first 15 minutes."

Mark Scheifele had an assist on all three of Winnipeg's second-period goals, while Nikolaj Ehlers and Patrik Laine each recorded a pair of assists.

Jakub Voracek scored his eighth goal of the season for the Flyers (12-13-3).

"We were dominating in the first," said Voracek. "Hellebuyck was standing on his head. He was playing pretty well. When they scored that third goal we kind of, I wouldn't say (we) changed things a whole lot, but we just tried to make the plays that weren't there."

Philadelphia's Michal Neuvirth, in just his second appearance of the season, allowed three goals on 10 shots before being replaced by Anthony Stolarz in the second period. Stolarz stopped 21 shots.

"It's tough coming back when you haven't played much hockey, really it's over the last 10 to 12 months," said Flyers head coach Dave Hakstol of Neuvirth. "Obviously, he wasn't seeing the puck. That's a tough first outing."

The Jets' power play was 3 for 6 on the afternoon, while the Flyers went 0 for 2 on the man advantage.

Morrissey's game-winner came on the power play less than three minutes after Connor opened the scoring for the Jets.

Winnipeg first second-period goal chased Neuvirth from the game, as Tanev jumped on a rebound for his fifth goal of the season.

Five seconds into their second power play, Byfuglien's point shot made its way through for his third of the season, making it 4-1 for the Jets.

Philadelphia's Robert Hagg was handed a game misconduct in the second period for a hit from behind on Connor.

The Jets wrap up a four-game home stand against the Chicago Blackhawks on Tuesday and the Edmonton Oilers on Thursday.

The Flyers, in the midst of a five-game road trip spanning 10 days, next play Calgary, Edmonton, and Vancouver beginning on Wednesday.

Note to readers: This is a corrected story. A previous version said Morrissey had one assist but an official scoring change gave him two total.