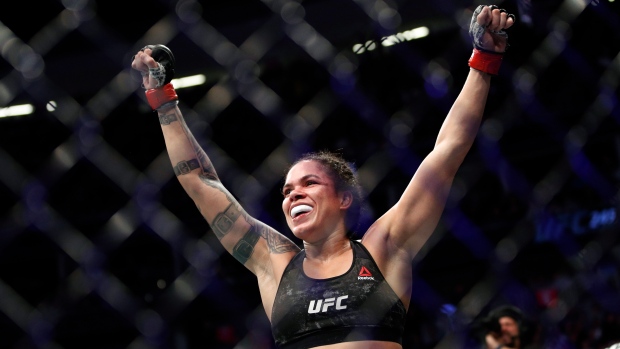 It’s hard to find an accomplishment that reigning UFC bantamweight and featherweight champion Amanda Nunes has not achieved. However, as she returns on Saturday to put the 145-pound belt on the line against Megan Anderson at UFC 259, Nunes has managed to add an accolade that is perhaps the most important one of all.

On September 24, Nunes and her fiancee, UFC strawweight Nina Ansaroff, welcomed their first child, Raegan Ann Nunes, into the world.

Now heading into her first title defence as a mom, Nunes says she’s feeling extra motivated by all of the joy that having a new baby girl has brought to her.

"This time it’s different, this time I’m going to be able to share with my daughter,” Nunes told TSN. “Seeing my hand being raised March 6, it’s going to be the first time that she’s going to be there and so I want to dedicate it to her. It’s just a new moment in my life and I’m pretty excited and makes me very happy because that’s motivating me. When I’m training happy, this was one of the best camps that I’ve had.”

Nunes has already well established her place as the greatest female mixed martial artist of all-time. She enters Saturday’s bout on an 11-fight win streak that includes capturing and defending both belts she still holds as well as victories over every woman to hold either championship.

She has also twice defeated flyweight champion Valentina Shevchenko during her winning run, though both of those bouts took place at bantamweight.

The 32-year-old Brazilian says she’s reinvigorated by the chance to have her new daughter with her as she navigates her way through her next title defence.

"Fight week and travelling with her, everything is going to be different, that brings that excitement back,” said Nunes. “This little girl is amazing, I don’t know how I can explain it to people, only if you go through it, if you’ve gone through it you know what I’m really going through in my life right now. It gives me power because I’m so happy and I want to share with her on March 6, I want to share that moment with my daughter. That is going to be another huge moment for me, making history, I’m going to bring my baby in the cage. It’s going to be amazing.”

For her second featherweight title defence, Nunes will have to deal with the much taller Anderson. The champion will be giving up four inches in height to the 6-foot Australian challenger, but says speed will be in her corner.

When you have two belts you become the target for twice as many fighters and the latest to call out the double champion was Julianna Pena. After Pena won her bout against Sara McMann at UFC 257 she turned her attention to the champ, causing the title holder to fire back on Twitter.

Ducking? You couldn’t even make yourself a contender for me. @VenezuelanVixen #UFC257

Ducking? You couldn’t even make yourself a contender for me. @VenezuelanVixen #UFC257

Nunes is prepared to face Pena somewhere down the line, if she can make herself into that contender.

"It is what it is, everybody wants the opportunity,” said Nunes. “I think she’s right, if she wants to fight me she has to make noise. Now she has a fight coming up, so let’s see how it goes and if I have to see her in the future, we’ll see each other. I don’t have any problem with that.”