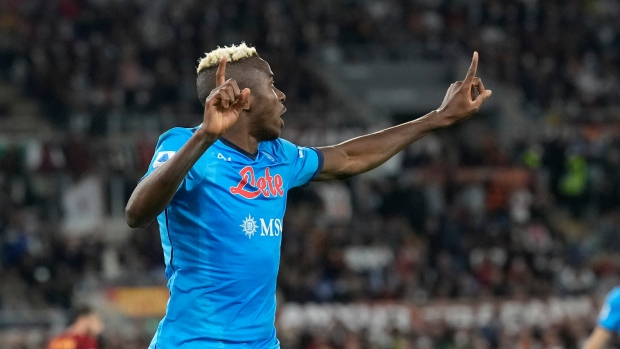 MILAN (AP) — Paulo Dybala returned to rescue Juventus as it snatched a 1-1 draw at Inter Milan in the Derby d’Italia on Sunday.

Dybala converted a penalty a minute from time to cancel out Edin Džeko’s first-half opener for Inter.

Inter remained third, seven points behind Napoli and AC Milan. Napoli earlier saw its perfect start to the season end with a 0-0 draw at Roma. It is above Milan on goal difference alone after the Rossoneri beat Bologna 4-2 on Saturday. Head-to-head is the first tiebreaker in Italy if teams are level at the end of the season.

“It was the only way we were going to concede a goal," Inter coach Simone Inzaghi said. "We're disappointed because we controlled the match from the start without conceding anything to Juventus.

“It's two points that we've thrown away.”

Juventus is three points behind Inter.

“We always play to win, but today we played against a great team and the way the game was going, we got an important point," Dybala said. "Lately I was forced to sit out with an injury, so I’m very happy with this goal.

"After so many years here, I have learned from so many teammates, from so many leaders and now I am trying to help the younger ones. I think my time has come and I’ll always try to do my best for the team.”

After a rocky start to the season, Juventus was unbeaten in its previous eight matches heading into the eagerly awaited match and had won its past four games 1-0. Defending champion Inter had lost its first league match of the season last weekend, at Lazio.

The Nerazzurri took the lead in the 17th minute. Hakan Çalhanoğlu unleashed a screamer from distance that bounced off the right post and Džeko fired home the rebound.

However, just as it looked as if Inter was about to get a potentially crucial victory, Juventus was awarded a penalty when Denzel Dumfries fouled Alex Sandro just inside the area.

Juventus was awarded a penalty on video review and Inzaghi was so incensed that he threw a piece of clothing onto the field and was sent off. Dybala slotted home the spot kick. He had come on in the 65th minute for his first appearance since an injury in the match against Sampdoria last month.

Napoli had won all eight of its Italian league matches in a stunning start to the season but it couldn’t find a way past Roma, despite hitting the woodwork twice in quick succession and having a late winner ruled out.

Roma coach José Mourinho was sent to the stands for dissent nine minutes from time. His Napoli counterpart, Luciano Spalletti, was also red carded after the final whistle as the referee judged his applause to be ironic, despite the coach’s fervent protests it was genuine.

Mourinho was looking for a reaction after Roma was routed 6-1 by Norwegian team Bodø/Glimt in the Europa League midweek.

But it was Napoli which went closer to breaking the deadlock, on the hour mark, when Victor Osimhen hit the right post from point-blank range under pressure, and a desperate tackle by Rick Karsdorp prevented Mario Rui from turning in the rebound. Osimhen also headed the resulting corner onto the top of the bar.

Osimhen thought he had won it two minutes from time but his header was ruled out for offside.

Simeone scored two goals in each half, helped by two assists from Gianluca Caprari, who was also in inspired form.

The 26-year-old Simeone is the son of current Atlético Madrid coach Diego Simeone, who played more than 100 matches for Lazio and helped the team to the league and cup double in 2000.

Ciro Immobile had halved the deficit for Lazio at the start of the second half.

The match was also notable as the great-grandson of former Italian dictator Benito Mussolini — 18-year-old defender Romano Floriani Mussolini — was on the bench for Lazio for the first time.

Lazio slipped to eighth, while Atalanta moved a point above the capital side into fifth after it was held to a 1-1 draw by Udinese.

Atalanta was struggling with an injury crisis but looked to be heading for the win thanks to Ruslan Malinovskyi’s 56th-minute strike, but Beto headed in a corner in the fourth minute of stoppage time.

Fiorentina moved up to seventh with a comfortable 3-0 win over relegation-threatened Cagliari.