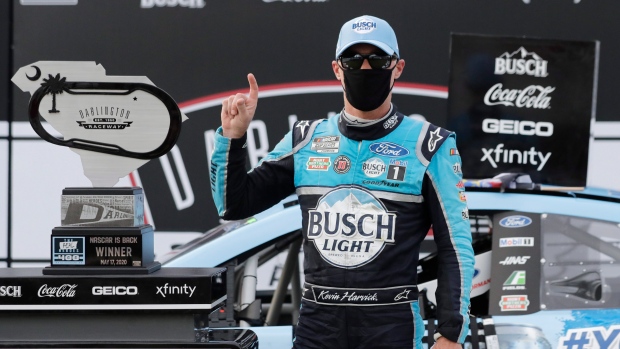 Remember when I wrote that every so often the information we have at our disposal so overwhelmingly points to one potential outcome that it becomes impossible to ignore it?

Well, that wasn’t the case at all for last week’s NASCAR Cup Series race.

Kevin Harvick was the consensus favourite to win the Quaker State 400 at Kentucky Speedway.

Martin Truex Jr., who had won two of the last three Cup Series races at Kentucky, was also among the drivers with the shortest odds to win.

So when Harvick and Truex were out front for the final restart with three laps to go, it seemed more than likely that one of those two drivers would take the checkered flag.

Then, the unimaginable happened.

What a finish! Retweet to congratulate rookie @ColeCuster on his first NASCAR Cup Series victory. pic.twitter.com/7XJxR9pvlI

Rookie Cole Custer, who was a 300/1 long shot to win at Kentucky, did the unthinkable by battling his way to the front and beating out both Harvick and Truex to the finish line.

Custer became the first rookie regular to win a Cup Series race that wasn’t shortened by rain since Juan Pablo Montoya all the way back in 2007.

With the victory, the 22-year-old secured a spot in Wednesday’s NASCAR All-Star Race at Bristol Motor Speedway.

Surprisingly, that matches Matt Kenseth for just the third-longest odds currently on the board, ahead of both Ryan Newman at +5000 and Justin Haley at +10000 to win.

So, can Custer shock the world again and win the $1 million prize?

Here is a closer look at the latest odds for the NASCAR All-Star Race.

By now, it really shouldn’t be a surprise to see Harvick listed in this spot.

After all, Harvick was the betting favourite or co-favourite to win each of the last four Cup Series races dating back to the weekend doubleheader at Pocono.

All he’s done is win two of those races along with a runner-up and a fourth-place finish.

Harvick has also won the NASCAR All-Star Race twice before, including most recently in 2018.

While neither of those victories took place at Bristol, which will host the NASCAR All-Star Race for the first time ever this year, they certainly demonstrate that Harvick won’t be intimidated on this stage.

The fact that Harvick hasn’t produced a top-five finish in any of his previous six starts at this course might influence bettors to shy away from playing Harvick for Wednesday’s race.

However, considering what we have seen from him this season as well as over his last four starts in particular, it makes sense that Harvick is once again the consensus betting favourite to win.

Hamlin was running just as hot as Harvick prior to a late wreck at The Brickyard a couple of weeks ago.

He followed up that 28th-place result at Indianapolis with a 12th-place finish at Kentucky this past weekend.

With $1 million on the line, the 2015 NASCAR All-Star Race winner has more than enough incentive to get back on track Wednesday night.

Hamlin has had mixed results in his career at Bristol, but he did win the night race here last season.

Considering he’s coming off back-to-back finishes outside of the top-five for the first time this season, Hamlin is due for a strong performance.

A two-time winner at Kentucky, Busch failed to figure things out again on Sunday when he placed 21st in the Quaker State 400.

The defending Cup Series champion is now 0-for-17 to start the season.

Despite the drought, Busch does have seven top-five results this year including runner-up finishes at California, Darlington and Atlanta.

Busch has won three of his last six starts at this track, posting an additional two top-four finishes over that span.

With $1 million up for grabs, Wednesday’s race might be the perfect opportunity for Busch to register his first victory of 2020.

Keselowski has really slowed down over the last few weeks.

While he’s recorded top-10 results in six of his last eight starts overall, he’s delivered only one top-five finish over that span.

Still, it’s impossible to overlook Keselowski after what he did earlier this season at Bristol.

Less than two months ago, the driver of the No. 2 Ford for Penske Racing led 115 laps at this track on his way to his second victory of the season.

Can he double down at Bristol with a lot more money on the line this time around?

At +900 to win outright, Keselowski could be a decent value option for Wednesday’s race.

Prior to his win at Kentucky, Custer had never even led a lap in a Cup Series race.

Now, with just 20 Cup Series starts under his belt, he gets the opportunity to race for $1 million.

For as impressive as last week’s performance was, it’s hard to envision the rookie doubling down with a second win in just four days.

However, at +3300 the value just isn’t good enough to take a chance on Custer to win outright again in Wednesday’s NASCAR All-Star Race.

*All Betting Information appears as listed by Bodog on Tuesday, July 14, 2020.