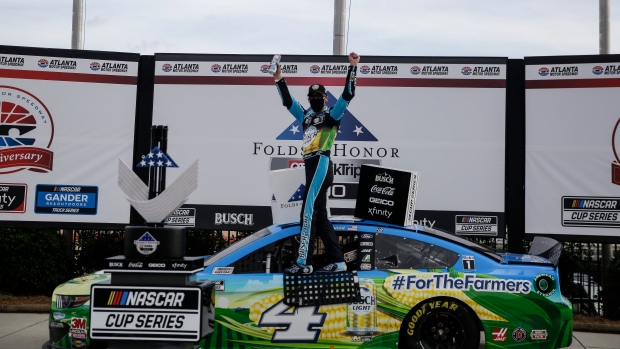 The past isn’t always the best predictor of the future.

However, every so often the information we have at our disposal so overwhelmingly points to one potential outcome that it becomes impossible to ignore it.

In those rare situations, it’s that much more rewarding when everything comes together to produce the expected outcome.

Last week, I wrote that Kevin Harvick was the obvious favourite to win at The Brickyard.

Two days later, he did exactly that.

After a brief rough patch that included just one top-10 in three starts, Harvick was able to get back on track with a win and a runner-up in the weekend doubleheader at Pocono.

As it turned out, he was heating up at an ideal time.

Harvick was the defending champ at Indianapolis Motor Speedway and the owner of the best all-time average finish mark at that track.

There was no doubt he was the consensus favourite for last Sunday’s race.

So when he went on to secure his third career victory at The Brickyard, none of the chaos that preceded the end of the race really seemed to matter.

Harvick matched Denny Hamlin with his fourth win - most in the Cup Series this season.

Harvick and Hamlin are also tied for the most top-five finishes in 2020 with nine.

There is one more important similarity that the top two drivers in the Cup Series standings share heading into this weekend:

Neither driver has ever won at Kentucky Speedway.

Considering what we’ve seen from Harvick and Hamlin over the past few weeks, it wouldn’t be a surprise if either one of those drivers ended his drought at Kentucky in this Sunday’s Quaker State 400.

There might not be as many indicators pointing towards a Harvick win as there were a week ago.

However, the driver of the No. 4 Ford for Stewart-Haas Racing is still the betting favourite to win outright once again.

Here is a closer look at the latest odds for the Quaker State 400.

However, Harvick has absolutely dominated at 1.5-mile tracks overall.

Over the last decade, Harvick’s 14 wins at 1.5-mile courses are tied for most in the Cup Series.

Harvick already added a first to his resume this season when he captured his first career victory at Pocono a couple of weeks ago.

Can he add another one at Kentucky this Sunday?

Eventually, Harvick is bound to finish outside of the top-two in a Cup Series race.

Still, it’s impossible to overlook the No. 4 Ford as the consensus favourite to win this week’s Quaker State 400.

I have to admit, I was caught completely off guard when I saw Bowyer listed at such short odds to win at Kentucky.

Bowyer is still looking for his first win of the year, with only two top-five finishes through 16 starts.

He hasn’t been particularly good at this track either, with just one top-10 finish in his last six Cup Series starts here.

It might be better to look elsewhere this week.

Hamlin appeared prime to add to his hot streak before he wrecked at The Brickyard with seven laps to go.

The bad news is that wreck pushed him outside of the top-20 for just the third time in 16 Cup Series starts this season.

The good news is that he should be able to bounce back this week.

However, he has delivered top-five finishes in three of his last five starts at this track, including finishing fifth here last year.

Barring another major incident, Hamlin should be a lock to return to the top-10 this weekend.

Nobody will be surprised if he contends for the outright win.

The defending Cup Series champion is still looking for his first win of 2020.

Sunday’s race might be an ideal opportunity for him to end the drought.

Busch is a two-time winner at Kentucky.

He’s placed in the top-10 in seven of his nine career Cup Series starts at this course.

In fact, Busch’s 4.7 average finish position at Kentucky is his best of any track on the schedule.

After falling just short as the runner-up at this race last year, it will be interesting to see if Busch can finally find a way back to Victory Lane for the first time this season.

Truex is another driver that must be looking forward to NASCAR’s return to Kentucky.

After all, Truex has won two of the last three Cup Series races at Kentucky.

His 326 laps led here over that span are 142 more than Busch for the most of any driver.

Truex has finished outside of the top-10 in three of his last five starts since his win at Martinsville.

After a rough ride at The Brickyard, Truex could fly under the radar as a decent value pick at +650 to win outright.

Consistency has been a major issue for Truex’s Joe Gibbs Racing teammate all season.

Jones has produced top-five finishes in two of his last four races.

The problem is that he’s also finished outside of the top-30 in two of those last four races.

Jones has placed seventh or better in each of his three career Cup Series starts at Kentucky, including a third-place finish here in 2019.

His 5.33 average finish position in those races is second best among active drivers behind only Kyle Busch over that span.

At the very least, Jones could be worth a look in alternate markets for this weekend’s Quaker State 400.

*All Betting Information appears as listed by Bodog on Friday, June 10, 2020.