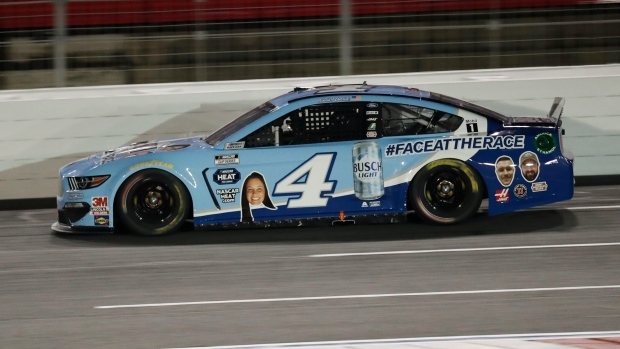 After a nine-day break between races, the NASCAR Cup Series returns with the Foxwoods Resort Casino 301 from New Hampshire Motor Speedway this Sunday.

While the drivers just outside the playoff picture continue to fight for position with seven races to go, Kevin Harvick and Denny Hamlin continue to battle for playoff points at the top of the standings.

Hamlin picked up his series-best fifth win of the year last week at Kansas.

Harvick and Hamlin finished 1-2 in last year’s race at the “Magic Mile”, with Harvick picking up his second consecutive win at this track.

No driver has ever been able to win three straight at New Hampshire. However, Harvick is once again the betting favourite to win this week at +375.

Hamlin is the second choice on the board at +450.

Here is a closer look at the latest odds for the Foxwoods Resort Casino 301.

Harvick’s four Cup Series wins at New Hampshire are tied with Jeff Burton for the most all-time at this course.

He’s recorded top-five finishes in seven of his last nine starts here, including three victories in his last five races at this track.

While +375 is among the shortest numbers there has been for a Cup Series favourite this season, it’s hard to make a case against Harvick as the obvious front runner to win the Foxwoods Resort Casino 301.

For as good as Harvick has been at the “Magic Mile”, Hamlin will have the opportunity to match him and Burton for the most wins all-time at this track with a fourth on Sunday.

He was also the runner-up here last year.

Despite leading all drivers with five Cup Series wins this season, Hamlin has finished outside of the top-10 in three of his last five starts overall.

Considering how dominant Harvick has looked of late, Hamlin can’t afford to take his foot off the gas down the stretch.

All things considered, it wouldn’t be a surprise to see Harvick and Hamlin battling each other for the outright win once again this week.

The defending Cup Series champion has somewhat faded in to the background this season thanks in large part to a 0-for-19 drought.

Is this the week he finally captures that elusive victory?

Busch has three Cup Series wins at New Hampshire in his career.

He’s also placed eighth or better in 10 of his last 12 starts at this track, including seven top-three finishes over that span.

It will be hard to trust the veteran Joe Gibbs Racing driver until he proves he can finally break through with a trip to Victory Lane in 2020.

At the same time, it isn’t a stretch to think that he can add to his impressive resume at New Hampshire at +130 to deliver another top-3 finish here.

If you are looking for a sleeper pick to surprise at this point in the year, it makes sense to target a capable driver that needs a win to force his way in to the postseason at long odds.

Jones checks off all three of those boxes heading in to this race.

The driver of the No. 20 Toyota is coming off back-to-back top-six finishes at Texas and Kansas.

At +2800, there is definitely enough value to consider Jones as a long shot with sleeper potential.

At the very least, he might be worth a look at +375 for a top-five finish.

On the outside of the playoff picture with seven races to go, Kenseth will also likely need a victory to force his way in to the postseason.

New Hampshire probably represents his best opportunity to get on the board.

Kenseth is a three-time winner at this track.

He’s also placed in the top-five in five of his last six starts here.

While he’s still a long shot to win this race outright, he would definitely be worth a look in alternate markets.

Kenseth is currently +750 for a top-five finish in Sunday’s Foxwoods Resort Casino 301.

*All Betting Information appears as listed by Bodog on Saturday August 1st, 2020.