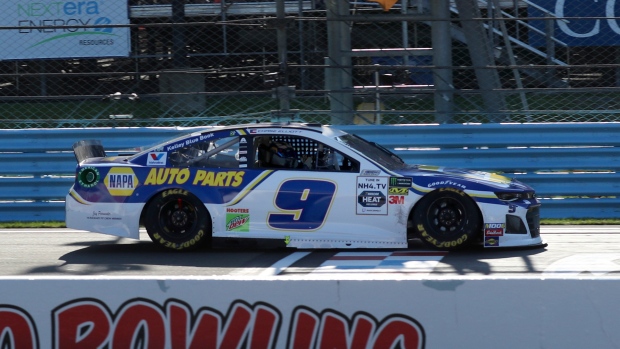 It’s been a rough few days for Hendrick Motorsports.

In a cruel twist, the longest race in NASCAR Cup Series history turned out to be just long enough to deal a devastating blow to that group.

Hendrick appeared primed to capture a victory and another top-five finish with Chase Elliott running first and Jimmie Johnson in third with two laps to go in the Coca-Cola 600 on Sunday.

Then, all of a sudden, teammate William Byron blew a tire and forced a caution.

Crew chief Alan Gustafson called Elliott to pit before overtime - a move that has been widely criticized and justifiably so.

After all, the other contenders stayed out and it ultimately cost Elliott the victory.

Brad Keselowski took advantage of the move to win the Coca-Cola 600.

In another unusual twist, Hendrick learned after the race that the No. 48 car was disqualified after it failed its post-race alignment.

I learned on my drive home last night we had been disqualified. It’s a tough reality to process but we are ready for Wednesday and what ever else 2020 throws at us. #OneFinalTime pic.twitter.com/r68FfeQM0s

The Hendrick Motorsports drivers will be in the spotlight again following a short turnaround ahead of the Alsco Uniforms 500 on Wednesday night.

Will Elliott and his teammates rally at Charlotte Motor Speedway?

Or is even more disappointment on the horizon?

Here is a closer look at the updated betting odds to win the Alsco Uniforms 500 outright.

A sixth-place finish on Sunday matched Truex’s best result of the Cup Series season to date.

So why is he the betting favourite to win the Alsco Uniforms 500?

Simply put, no car has performed better than the No. 19 Toyota at Charlotte Motor Speedway in recent years.

Truex has won three of the last seven Cup Series races at this track, including last year’s Coca-Cola 600.

In fact, prior to Sunday’s race Truex had placed first, second, second and third in his previous four Cup Series starts at Charlotte.

He owns a 4.0 average finish position over his last nine starts here.

It’s hard to argue against the past success Truex has had at this track.

Still, it’s just as difficult to trust a driver that is still looking for his first top-five finish of the season heading into Wednesday’s race.

Elliott had a nearly two-second lead with three laps to go at the Coca-Cola 600 when the final caution flag came out.

That was just four nights after the Toyota 500, where the No. 9 Chevrolet was wrecked by Kyle Busch as he pushed Denny Hamlin for the outright lead on the final green-flag lap.

Unlike the wreck at Darlington, Elliott still managed to salvage a third-place finish in Sunday’s race – moving up to second following Johnson’s disqualification.

However, the focus remains on what could have been after the 24-year-old suffered a couple of highly unfortunate breaks in back-to-back starts.

Will the third time be the charm?

After narrowly missing out on a pair of victories, Elliott appears poised to challenge for the outright win once again on Wednesday night.

He has placed in the top-five in each of his last two starts at Charlotte.

With a little luck, maybe Elliott will finally break through to win the Alsco Uniforms 500.

Busch has placed inside the top-four in each of his last three starts at Charlotte Motor Speedway, including winning the Coca-Cola 600 in 2018.

After a fourth-place finish on Sunday, Busch made a dramatic last-lap pass to win Monday’s Xfinity Series race at Charlotte in overtime.

CHECKERED FLAG: @KyleBusch takes the 🏁 with a pass in the final turn of the #Alsco300 at @CLTMotorSpdwy!

With top-five finishes in four of his last five Cup Series starts overall, we should be able to trust that Busch will navigate his way into contention once again on Wednesday night.

The fact that Harvick managed a fifth-place finish on Sunday despite never really looking like he had what it took to win the race should be a concern for the rest of the field.

The No. 4 Stewart-Haas Racing Ford hasn’t finished outside of the top-five in any of his last four starts, including a victory at The Real Heroes 400 at Darlington.

The only driver to finish in the top-10 in all seven Cup Series races this season is very much in the picture to capture the checkered flag on Wednesday night.

All things considered, it’s somewhat of a surprise that Harvick is listed at +900 to win this race outright.

Sunday’s win was Keselowski’s first at Charlotte since he won the Bank of America 500 all the way back in 2013.

How long will he have to wait for his next victory at this track?

Keselowski hadn’t placed better than fourth in any his previous 10 starts at Charlotte dating back to 2013, with just two top-five finishes over that span.

Keep in mind that with no qualifying, NASCAR will invert the results of Sunday’s race from first through 20th to determine its starting grid.

That means the No. 2 Ford will start in the No. 20 spot on Wednesday night.

At +1000 odds, there isn’t enough value to make it worth betting on Keselowski to go back-to-back at Charlotte.

If he hadn’t been disqualified, Sunday’s runner-up finish would have been Johnson’s best since his last win at Dover back in 2017.

As it stands, Johnson has now gone winless in 102 straight races.

The No. 48 car has just one top-five finish in seven starts this season.

So why is Johnson listed at the same odds to win as Keselowski?

Well, he did contend on Sunday before the DQ.

He also registered top-10 results in five of his previous six starts at Charlotte.

Still, that alone isn’t enough to justify his odds to win outright shortening for this race.

All things considered, it’s probably best to fade Johnson until he proves he has what it takes to make it back to Victory Lane.