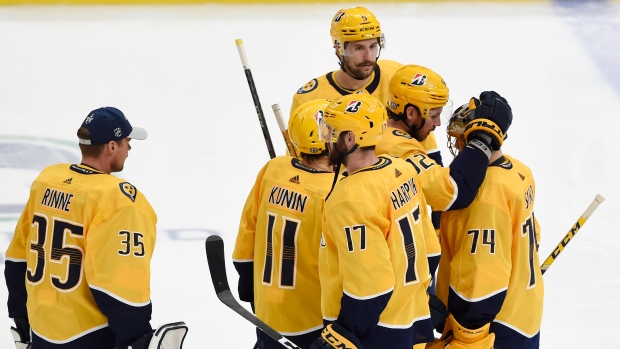 NASHVILLE, Tenn. (AP) — The Nashville Predators believe they're back to playing the way that makes them NHL title contenders despite another early postseason exit.

Winning a playoff series for the first time since 2017 will require more.

The Predators salvaged a start that had them in contention for the NHL lottery draft by winning 20 of their final 28 games to reach the postseason for a seventh straight season. Yet they lost the series in six games even as four straight went to overtime including Thursday night's Game 6 loss to Carolina.

It was just the third series with four or more consecutive overtime games and the first since the 2012 conference quarterfinal between Phoenix and Chicago. The other was the 1951 Stanley Cup Final between Toronto and Montreal.

Hynes said the Predators showed a toughness, style of play and identity they didn't have a year ago.

Defenseman Ryan Ellis said they had lost the “Predator way” the past couple seasons but got back to playing the way they know they can. He said only a bounce here or there kept the Predators from winning the series.

“There’s a lot of optimism around here, or there should be, because from where we came the last couple of years to to the identity we have now, the way we play now," Ellis said. “I mean, we just hung with the one where they finished second or third in the in the the whole thing.”

Injuries sped up a youth movement postponed once the NHL announced a condensed schedule for this season during the pandemic. General manager David Poile, 71 and the NHL's winningest GM, now has to tighten up a roster that featured a franchise-record 12 rookies and a handful of highly-paid veterans.

“We just got to find a way to to be a little bit better in all areas," center Ryan Johansen said. “I think we can take a lot of confidence as a group in our abilities from these last three, four months and moving forward.”

The Predators have a chance at clearing some roster and cap space if the Seattle Kraken take one of their big contracts off their hands July 21.

Matt Duchene still has five years left on the contract he signed in July 2019 paying him $8 million a year, scored only 13 points in 34 games this season with a minus-12 rating. Johansen also is being paid $8 million a year with four years left, but he led Nashville with three goals this postseason.

Poile made clear last month he'd like to sign defenseman Mattias Ekholm to an extension, though he has another year for a deal. Filip Forsberg also will need an extension in a year.

The Predators also have several restricted free agents led by Eeli Tolvanen and Tanner Jeannot. Tolvanen, who was benched for Game 6, had 22 points in 40 games.

Pekka Rinne, the 2018 Vezina Trophy winner, posted an emotional shutout in the regular season finale. He turns 39 in November, and his extension that paid him $5 million each of the past two seasons is too much to pay a backup.

But he also had two shutouts this season. He's tied for 19th in NHL history with Tom Barrasso with 369 career victories and 60 career shutouts. So an extension bringing him back is possible.

Saros proved he is the Predators' No. 1 goalie now. A restricted free agent, he's in line for a pay hike from the $1.5 million of this season. Saros went 21-11-1 during the regular season, and the 26-year-old Finn first tied, then set the franchise record for saves in back-to-back double overtime victories.

“We all know what had happened, how he played really well down the stretch the second half of the year,” Hynes said. “He was a big difference in this series.”