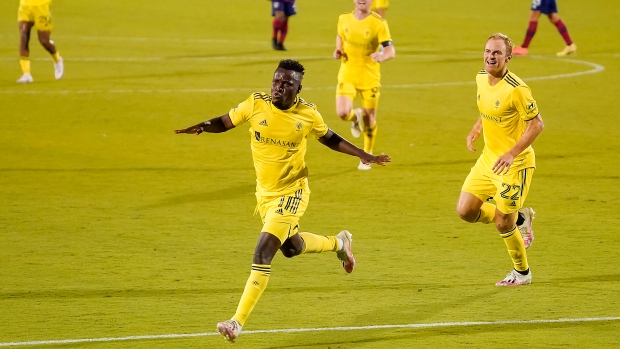 FRISCO, Texas — David Accam scored in the 86th minute to give Nashville SC a 1-0 victory over FC Dallas on Wednesday night in the first match for both teams since Major League Soccer shut down the season in March because of the coronavirus.

Nashville and Dallas were forced to withdraw from the MLS is Back tournament this past month in Florida because of positive COVID-19 tests. The game between the teams at Toyota Stadium was the first of the league's restart of the regular season.

Fans were allowed in the stands for the game, but at a reduced capacity because of local regulations in Texas. Although 5,100 were allowed, the crowd appeared much smaller.

Nashville was without coach Gary Smith for the game because of COVID-19 testing results. Although he ultimately tested negative, it was too late for him to make the trip for the game.

Players from both teams and the officials took a knee when the national anthem was played before the game. But there were some boos from the crowd.

“I think it was absolutely disgusting,” Dallas defender Reggie Cannon said. “You've got fans booing you for people taking a stand for what they believe in? When millions of other people support this cause?”

MLS is playing an abbreviated season in local markets following the MLS is Back tournament, which was played without fans at ESPN's Wide World of Sports at Walt Disney World. The Portland Timbers defeated Orlando City in the championship match on Tuesday night.

Because the group stage of the tournament counted toward the regular season, Dallas and Nashville were behind the other teams. They will play each other three total times, with the second game set for Sunday at Toyota Stadium.