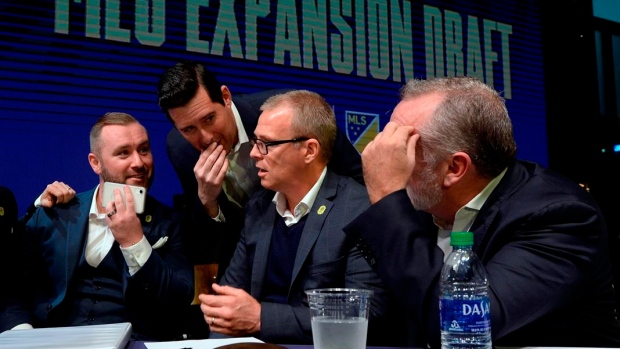 As Nashville SC embarks on its first Major League Soccer season, defender Walker Zimmerman has been surprised by how quickly the team has coalesced.

He knows a bit about expansion teams having been on Los Angeles FC’s original roster.

“The thing that we stressed back at LAFC was, 'Don't look at it as we're coming in as an expansion team and let that change your expectations. You're in MLS now.' So that's the message here: Sure, we are technically an expansion team, but we're in MLS just like any of the other teams," Zimmerman said. "So don't let that change our mindset. Don't let that change our mentality. We're going to come out and compete, not as a team trying to prove ourselves, but as a team that's wanting to establish ourselves in the right way.”

Zimmerman, who joined the league in 2013, is among a number of veterans assembled for the team's first season, including midfielder Dax McCarty and defender Anibal Godoy.

Additionally there are 14 players on the roster who are new to MLS, including attacking midfielder Hany Mukhtar, the team's lone designated player, from Denmark's top division, and Randall Leal, a young winger who played for Saprissa in his native Costa Rica.

“It's a great group, really hard-working group. And I was really surprised at the camaraderie that was already established in the first month of preseason,” Zimmerman said. "So hats off to everyone for really getting along, buying into this process. It's not easy, but I think everyone's really excited for this weekend."

“I've been around the block a few times and I've been around long enough to know that our group, what we have is just real. We have a real sense of camaraderie. Guys have really bonded off the field. We have a sense of discipline and organization and how we're gonna play. But also, I've been pleasantly surprised with some of our attacking players and guys that I didn't know much about,” he said. “So I think that there's a real sense of urgency with this group that we want to start off our first season on the right foot.”

There's buzz surrounding the team's nationally televised season opener against Atlanta United on Saturday night at Nissan Stadium. Nashville reported Friday that more than 50,000 tickets had been sold, putting the game in reach of the stadium's record of 50,232 for a soccer match, set back in 2017 when the stadium hosted Tottenham and Manchester City.

Players were excited at the chance to play Atlanta, which won the MLS Cup in 2018 and last season won the U.S. Open Cup and Campeones Cup. Star striker Josef Martinez won league MVP honours in 2018 and had 27 goals last season.

Known for its successful launch and rabid supporters, Atlanta provides something of a blueprint for what Nashville hopes to be. Atlanta averaged 52,510 fans a game last season, most in the league.

The match could also be the first in what is hoped will become a rivalry: The two teams are separated by just 250 miles.

“They'll want to try and stamp their authority on the rivalry. And we'll certainly want to get off to a very good start if we possibly can. And a lot of that comes down to our preparations. I feel as though we've put ourselves in a decent place,” Nashville coach Gary Smith said.

Smith, coach of the Colorado Rapids team that won the MLS Cup championship in 2010, led Nashville to a 20-7-7 record last season in the USL Championship.

Overall, Nashville SC is still very much a work in progress. The team's proposed deal for a soccer-specific stadium hit a snag last fall when scheduled demolition at the Fairgrounds Nashville site didn't start. It turned out that new Mayor John Cooper was re-examining the city's agreement for the stadium.

The Metro Nashville Council originally approved a $275 million project in November 2017, and the next month the city was awarded the franchise by MLS.

Under the terms of the renegotiated agreement, the team will pay $54 million more in additional costs, including potential debt payments and $19 million for infrastructure around the stadium.

The new stadium is set to open in 2022. Until then, the team while share Nissan Stadium with the NFL's Tennessee Titans.

Such issues are to be expected with a startup, but Smith is anxious to finally get Nashville SC off the ground.

“What I can say is I'm very pleased at where the group's at, both aerobically and in terms of their fitness. Their appreciation of some of the foundational pieces of our group with or without the ball, are good," Smith said. "Can we improve? Yeah, of course. But we're in a good spot.”