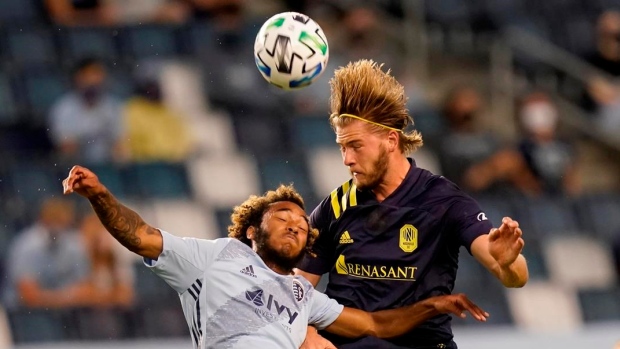 NEW YORK — Nashville SC centre back Walker Zimmerman has been named the 2020 MLS Defender of the Year.

The 27-year-old U.S. international received 28.37 per cent of votes from MLS clubs' technical staff, players and the media. Philadelphia's Mark McKenzie was second at 23.04 per cent and Columbus' Jonathan Mensah third at 16.07.

Toronto FC's Chris Mavinga was fifth at 3.99 with teammate Richie Laryea sixth at 3.03.

Zimmerman anchored a stingy defence that helped Nashville become just the sixth expansion club in MLS history to clinch a playoff spot in its inaugural season. Nashville posted a goals-against average of 0.96 goals per game, the best ever by an expansion club, and tied for the league lead with nine clean sheets this season.

The club allowed 22 goals in 23 games this season, third-fewest in the league, and only two goals more than league-leading Philadelphia.

Zimmerman scored three goals, including the franchise's first goal in its inaugural match Feb. 21, and added one assist in 22 starts this season. He led the league with 69 headed clearances, while his 64 aerials won were tied for sixth-most.

This report by The Canadian Press was first published Nov. 18, 2020