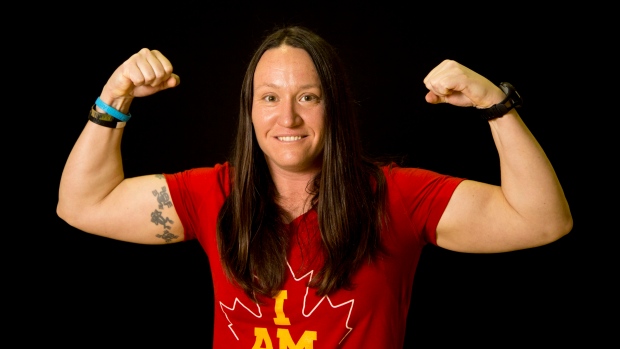 The former master corporal served in several Canadian Forces regiments, including the Royal Canadian Dragoons, for over 16 years. She did a tour in Bosnia and two in Afghanistan — the last of which saw her witness the deaths of two comrades.

Her diagnosis of post-traumatic stress disorder came after her return home. And her symptoms didn't just include psychological difficulties — she was in physical pain, too. Dupuis said she'd always been athletic, but found herself gaining weight.

So Soldier On, a Canadian Forces program to help rehabilitate injured veterans, gave her a mountain bike — a gift that Dupuis said started her road to recovery.

"Mountain biking was part of my journey," said the Gatineau, Que., resident. "That's how I got back into sports."

Three years after she left the military, Dupuis is one of Team Canada's co-captains at the Invictus Games, which got underway in Toronto this weekend.

The Games are an international sports competition for military veterans with physical or mental injuries. Prince Harry, himself a former captain in the British army, started the Games after visiting a similar event for U.S. military personnel in 2013. He decided to launch a much larger international version open to several nations as a way to showcase the wounded soldiers' "unconquered spirit."

Over 400 athletes from 13 nations attended the first Invictus Games, held in London, in the fall of 2014. Two years later, the second Games saw 500 athletes from 17 different host nations compete in Orlando, Fla.

At least 550 athletes from 17 countries are competing in 12 sports in the Games this year, making it the largest in the history of the sporting event. Ninety of those athletes are Canadian.

Dupuis was part of Team Canada in Orlando last year. She ran — and won gold — in both the 100-metre and 200-metre dash, and picked up a bronze in powerlifting. But her hard work at the Orlando Games didn't just mean an array of medals for her wall. Dupuis said she lost about 30 pounds over the course of training.

"Last year's Games was the extra push that I needed to regain control over my illness and my injury," she said.

This week, she'll be back for both track-and-field and, for the first time in her Invictus career, rowing.

"I think it's very exciting and I can't wait to actually perform in front of Canadians," Dupuis said.

For many of the participating athletes, the Invictus Games go beyond medals. They say it's also about the camaraderie that comes with the serving in the military.

Dupuis is no exception.

"Having a medal is nice," she said. "But...the Invictus Games is much more than that."