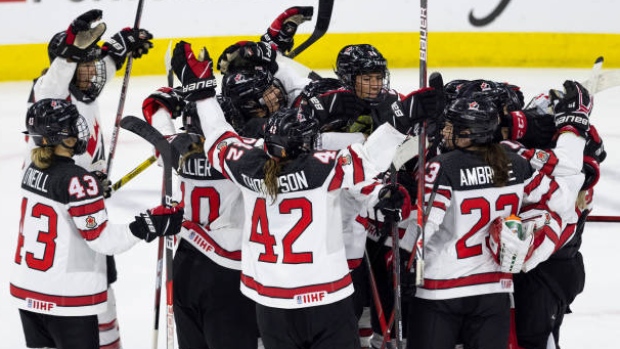 Melodie Daoust added a goal and two assists, while Jaime Bourbonnais and Laura Stacey provided the rest of the offence for Canada.

Claire Thompson chipped in with three assists as 13 players recorded at least a point. Kristen Campbell stopped all 13 shots she faced to register her first win and shutout with the national team.

"We were rolling today and creating a lot of offence," Spooner said. "It's always nice when they're going in for you, and I thought my line did a really good job of getting pucks to the net.

Canada led 1-0 after the first period before busting things open with four in the second and three more in the third.

"The girls played great in front of me," Campbell said. "It was just really exciting to get the win and execute a full 60 minutes."

The Canadians also topped the Finns 4-2 in Helskini on Thursday. The teams wrap up the three-game exhibition set Sunday back at Turku's Gatorade Center.

The series in Finland is part of Canada's preparation for February's Winter Olympics in Beijing. It's also represents the national program's first action outside North America since the 2019 world championship in Espoo, Finland.

Twenty-nine women have been centralized in Calgary since July. Canada's 23-player Olympic roster is expected to be announced in late December.

Following the games in Finland, Canada and the United States will play Nov. 21 in Kingston, Ont., followed by a game Nov. 23 in Ottawa.