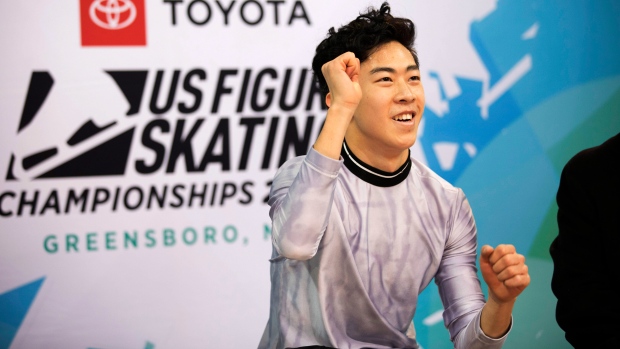 GREENSBORO, N.C. — Nathan Chen established himself as one of America's greatest skaters Sunday when he won a fourth straight national title.

The ninth man to earn at least that many U.S. Figure Skating Championships in a row, and the first since Brian Boitano completed that kind of quad in 1988, Chen hit four quadrule jumps and six triples in his “Rocketman” routine that had the crowd on its feet long before it concluded.

Chen, 20, has not lost a competition since a dismal short program at the 2018 Olympics ruined any chance at a medal. He's won two world championships and three Grand Prix Final's crowns altogether.

Plus the four U.S. titles as he continues raising the standards for men's skating even as he attends Yale full time.

“Each time you win, you gain more confidence," said Boitano, the 1988 Olympic gold medallist and a two-time world winner. “After Nathan won his first world championship, on ice he was like a different man. He has become a dominator, yet in an understated way, too. He learned so much in that short program at the Olympics and kept that in his head. He has not made those mistakes again. That's part of his toughness and sense of accomplishment."

Chen also owns a bronze medal from the team event at Pyeongchang and will be a favourite for a third successive victory at worlds in Montreal in March.

Joining him there will be Jason Brown and Tomoki Hiwatashi.

The last American man to win three consecutive world titles was Scott Hamilton with his fourth in a row in 1984.