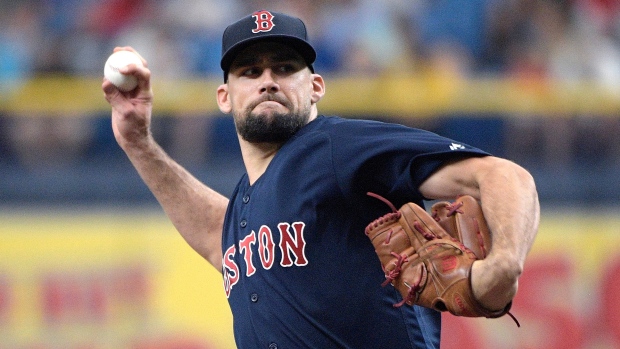 Tampa Bay dropped into a tie with Cleveland for the second AL wild card, and both teams trail Oakland by two games for the top spot. The Rays won the first two games of the series by identical 5-4 scores in 11 innings.

"Every loss now you've got to find a way to bounce back," Tampa Bay manager Kevin Cash said. "Eventually you do run out of mulligans. We're not there but we've got to make sure we don't get to that point."

Eovaldi (2-0) gave up three runs and seven hits in picking up his first win as a starter since last Sept. 24. The right-hander had elbow surgery to remove a loose body in late April and has been building up innings over the last month.

"I want to finish strong," Eovaldi said. "I feel like I've missed so much time as it is now."

Eovaldi was traded by Tampa Bay to Boston in late July 2018 and won both his playoff starts and ended up with an 1.61 ERA in six overall appearances.

Boston designated hitter J.D. Martinez drove in two runs and is one RBI away from his third consecutive and fourth overall season of at least 35 homers and 100 RBIs.

Rays two-way player Brendan McKay got his first major league homer on a solo shot off Trevor Kelley as a pinch-hitter in the ninth.

"My family was here today," McKay said. "They came down, I think, last night and decided to come to a game today and they ultimately get to see it. Exciting."

Martinez had an RBI single and Vazquez hit his homer off Ryan Yarbrough (11-5) as Boston went up 4-0 in the first.

Vazquez has 22 homers in 133 games this year. He went deep 10 times over 291 games during his first four seasons.

The Rays scored a run in each of the first three innings off Eovaldi, including Joey Wendle's third-inning homer, to get within 4-3.

Boston took a 6-3 lead in the fourth when Andrew Kittredge replaced Yarbrough with one-out and walked Martinez with the base loaded and later threw a wild pitch.

Tampa Bay All-Star second baseman Brandon Lowe, out since July 3 with a bruised right shin and later strained left quadriceps, was reinstated from the 60-day injured list and went 1 for 3 with a walk.

Cora plans to have a busy off-season working with his players in a number of areas like on-base percentage and cutting down on strikeouts. "We have to keep adjusting," Cora said. "Be better at certain aspects and we'll be back."

Rays CF Kevin Kiermaier was mired in an 0 for 22 skid before getting an RBI single in the second. He was hit on the left forearm-wrist area by an Eovaldi pitch during the fourth but stayed in the game

Red Sox: LHP David Price will have surgery Thursday to remove a cyst in his left wrist but is expected to be ready for spring training next year. ... OF Mookie Betts, who played the previous two days after missing a week due to left foot inflammation, had a scheduled day off. ... OF Andrew Benintendi (jammed left thumb) was out of the lineup for the second straight game but could start Monday.