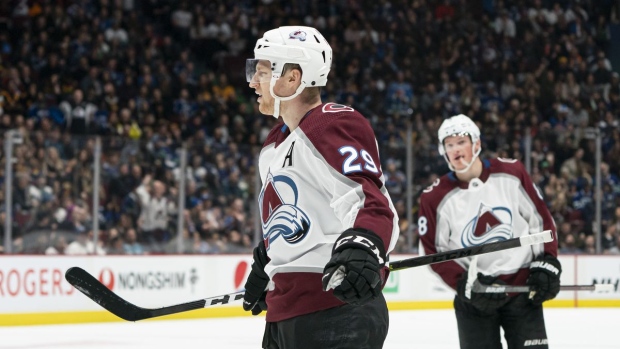 MacKinnon topped the NHL with nine points (three goals, six assists) in three games to power the Avalanche to a perfect week and into second place in the Central Division. The native of Cole Harbour, N.S., highlighted his week with his eighth career four-point performance, and third of the season, with a goal and three assists in Colorado's 5-2 win over Chicago on Friday.

Rittich stopped 95 of the 101 shots he faced, compiling a 2-0-1 record, 1.94 goals-against average and .941 save percentage in three contests to lift the Flames to five out of a possible six standings points. The play of the Czech goaltender helped stabilized the Flames on the ice while the team dealt with an off-ice controversy that led to the resignation of head coach Bill Peters.

Jones went 3-0-0 with a 1.98 goals-against average and .935 save percentage in three appearances to backstop the Sharks to three wins in four games and into third place in the Pacific Division.

This report by The Canadian Press was first published Dec. 2, 2019.