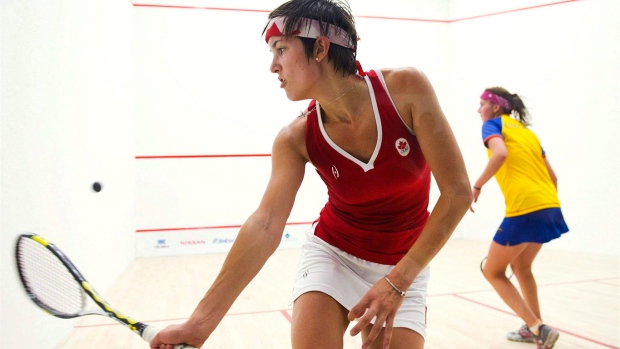 She will serve as captain for the 11th-seeded host side at the Dec. 1-6 tournament at White Oaks Conference Resort & Spa in Niagara-on-the-Lake, Ont. The 23-year-old national champion will be joined by Danielle Letourneau of Calgary, Regina's Nikki Todd and Hollie Naughton of Oakville, Ont.

The four-player team — all between the ages of 20 and 24 — will be coached by former national champion Melanie Jans. The Canadians are aiming for a top-eight finish and will open round-robin play Monday against third-seeded Malaysia, led by world No. 1 Nicol David.

The other teams in Pool C include the United States, Mexico and Guatemala.

"It's an amazing experience for me because I get to play against the top players in the world," Cornett said of her third career appearance at the event. "So I'm going to be out for blood trying to beat them all up, especially as we have the world (singles) championships right after.

Canada will be a major underdog against Malaysia. The sixth-seeded Americans could be a handful but Canada will be favoured against Mexico and Guatemala.

Cornett, the world No. 30 from Deep River, Ont., will be in for a stiff challenge against David, who recently celebrated an unprecedented 100th successive month at the top of the world rankings.

The world team event is the only major title that has eluded David over her stellar career. She has won her last 27 matches at this tournament but her team has settled for bronze on four straight occasions.

Egypt defeated England in the 2012 final in Nimes, France. The English side, led by world champion and second-ranked Laura Massaro, is seeded second.

"I think we'll be a nice dark horse in the event," Cornett said.

The tournament will also serve as an important building block for the young Canadian side as it gains experience against top-flight competition. The event comes eight months before the 2015 Pan American Games in Toronto.

Notes: This is the fourth time that the women's world team championship has been staged in Canada. Edmonton hosted in 2006, Vancouver in 1992 and Toronto in 1981. ... Jonathon Power of Toronto and England's Vanessa Atkinson — both former top-ranked players — will serve as match presenters and Squash TV broadcasters. ... Eight courts will be used for matches, including a showcase glass-walled court with seating for 500 people. ... Former IOC vice-president Dick Pound will serve as the tournament's honorary chair. The former national swimming champion was also once a nationally ranked squash player.