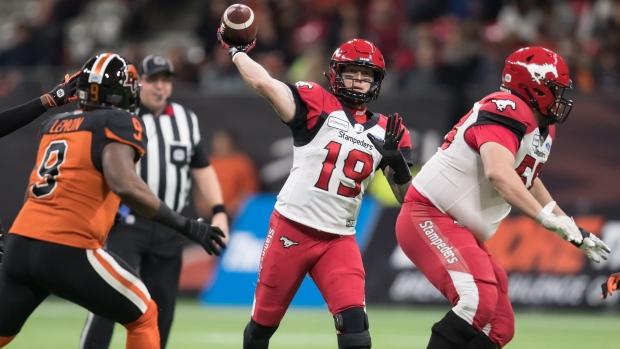 The CFL announced on Friday it’s ending its moratorium on football transactions and that teams can begin signing their pending free agents on Dec. 7.

There are 321 players who fit that description – roughly half the league – although that number is significantly inflated by the fact teams weren’t able to re-sign players over the summer and fall as they normally do.

Edmonton has the most at 48 players; Toronto the low at 22. But expect those number of players to be reduced drastically by the time we get to the opening of free agency on Feb. 9.

The market that awaits players next week is likely to be significantly different than normal, both in terms of how much and how players are paid in a reflection of the steep decline in team revenue due to the pandemic.

The league’s highest-paid players are likely to feel the greatest impact, as teams plan to stay closer to the salary floor ($4.75 million) than the cap ($5.35 million).

And it's not just pending free agents that will feel the hit. So too will players with contracts that go into next season, as teams are expected to ask players to renegotiate deals for lesser amounts.

That’s inevitably going to take a bite out of the starting quarterback market, a market that got a significant bump during the run up to the 2019 season when Calgary’s Bo Levi Mitchell and B.C.’s Mike Reilly set a new salary standard, earning deals annually worth $700,000, and increasing the pay scale of starters across the league.

The economic pressure on teams is complicated by the fact that the minimum salary jumped by more than 20 per cent in 2019, from $54,000 to $65,000, making it difficult to claw back money from players at the bottom of the pay scale.

Another change is going to be the scarcity of upfront money paid to players this winter.

Teams may be willing to pay some upfront money to players who agree to renegotiate their deals. But those players are likely to be the only ones who cash off-season cheques this winter. Teams will be extremely hesitant to give signing bonuses to new players, or to honour off-season bonus payments prescribed in existing contracts.

That reality will start to hit in January, when teams will have to decide between paying an off-season bonus that is due to an existing player, releasing the player, or getting him to redo his deal without the upfront money.

None of that is expected to be popular with players and agents, whose only CFL compensation in 2020 came from signing bonuses or other off-season bonuses prescribed within contracts.

But with teams having averaged more than $500,000 paid out to players for a season that didn’t occur, the purse strings are going to be very tight this time.

It’s possible some teams could ask players to swap off-season bonuses for "report and pass" payments, which protect the league from paying out salaries in the event there is no season. But that might be a best-case scenario for many.

The bottom line is that whatever CFL season occurs in 2021 isn’t likely to be very satisfying to anyone. Not for the teams, who are sure to lose money in any scenario, and not the players, who will be feeling the repercussions of the league’s massive decline in revenues.