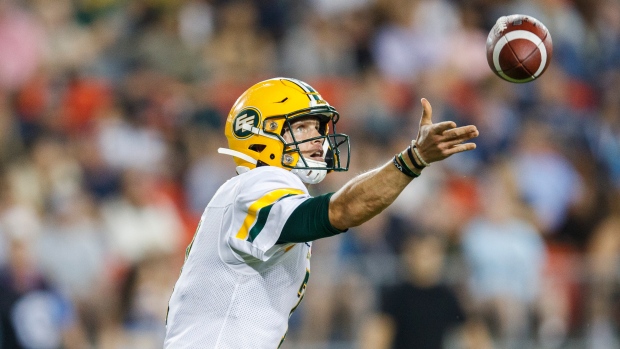 Football may not be a sport defined by statistics, but key categories can usually provide a strong indication of the way a team performs from week to week.

That is unless we are discussing the Edmonton Eskimos, the rare team that dominates statistically but is just one game above .500 entering Week 13.

Edmonton’s offence has gained the most yards of any in the CFL this season, while its defence has allowed the fewest. That alone is usually enough to indicate a team that has been dominant over the course of a season.

But the statistical story of the Eskimos doesn’t end there.

The Eskimos have the CFL’s highest second-down conversion rate and gain the most yards per play while also boasting the most plays of 30 yards or more. They have the CFL’s most completions, highest completion percentage, fewest number of interceptions thrown and lowest rate of going two-and-out.

In terms of time of possession, no team’s offence spends as much time on the field as Edmonton’s does.

Yet they rank sixth in overall points scored this season. Sixth!

But it’s not all on offence.

Teams facing Edmonton’s defence have the lowest second-down conversion rate this season and the fewest yards per play. The Eskimos defence is also generating the most two-and-outs.

And when it comes to the all-important skills of getting to or protecting the quarterback, nobody does it better than Edmonton, leading the league in sacks while giving up the fewest.

Individually, they have the league’s leading passer, three of its top-10 receivers and its second-leading rusher. On the other side of the ball, four of the league’s top-10 sack artists are Eskimos.

“I’d rather be last in every category and be 10-1,” said Eskimos general manager Brock Sunderland.

The biggest reason Edmonton has failed to live up to the sum of its parts is the team’s lack of success in the red zone (inside the 20-yard line), where they rank second to last.

For example, in two games against Winnipeg – one decided by seven points and one by six – the Eskimos made 13 trips inside the Blue Bomber 30-yard line that failed to produce a single touchdown.

There’s another pattern that has defined the Eskimos this season.

Edmonton’s six wins have come against the Argonauts (two), Lions (two), Alouettes (one) and Redblacks (one), teams with a combined record of 10-29.

Their five losses have come to Montreal (one), Calgary (two) and Winnipeg (two), teams with a combined record of 19-11 – including three games in which they failed to score a touchdown.

Beyond their red-zone struggles, Edmonton leads the league in taking penalties and is the only team that doesn’t have a return touchdown this season, ranking last in big-play returns (a situation that should improve with the recent addition of Christion Jones in a trade with Saskatchewan.)

Edmonton’s 10 turnovers on downs have contributed to an overall turnover ratio of minus -3. The Eskimos also haven’t been particularly good in close games or coming from behind, holding a record of 1-4 in games decided by 5 to 10 points and 1-5 in games when trailing after either the second or third quarter.

The sum total of those deficiencies is taking its toll on the record of what is a very talented roster.

So are the Eskimos a team that is about to harness all that talent into a string of wins the rest of the season? Or is this a team that will leave its coaches, management and fans continuing to feel frustrated that all of this statistical success isn’t producing better results?

Things are about to get interesting, with three of Edmonton’s next four games against either Calgary or Hamilton.

By the early October we should have a good indication of what this team truly is.

Winnipeg head coach Mike O’Shea was irate at both the officials and the Saskatchewan Roughriders after defensive lineman Lavar Edwards blew up Blue Bomber long snapper Chad Rempel on the front end of a punt play on Sunday.

Rempel left the game and won’t play this week, adding to a list of roster woes the Bombers are facing, including being without receivers Nick Demski and Lucky Whitehead.

There is, according to some, an unwritten understanding about players not steamrolling a long snapper, something the league tried to back up this past off-season by instituting a rule that states the long snapper’s head must be up before a defender can engage him.

By the book, Edwards didn’t engage with Rempel while his head was down, which is why no flag was thrown. He did, however, use his full physical force to send him backwards, which even Saskatchewan head coach Craig Dickenson conceded this week, saying his team would “correct how we coach it so it doesn’t happen again.”

Look for this play to be the catalyst to an off-season conversation about better and clearer ways to protect the long snapper.

In the NFL, defenders aren’t allowed to line up directly across from the long snapper and in NCAA football there is a one-second rule in force before a defender can engage.

The play on the weekend shows the league clearly needs more than just a gentlemen’s understanding of what’s an acceptable degree of force when contacting a long snapper.

In the meantime, the league issued a memo to all nine teams this week, reminding them of the vulnerability of long snappers and telling them that officials will be paying attention to how aggressively defenders come at them.

Maritime Football Ltd. submitted its business proposal to Regional Council in Halifax on Aug. 30, outlining its plans to spend $130 million dollars on land, design and a facility to house the CFL’s tenth team.

The final vision for the project is considerably scaled back from opening concepts, both in price and grandiose (original estimates for a stadium were pegged at between $170 million and $190 million).

That suggests the group understands there’s no point submitting a proposal that won’t get passed, as opposed to going modest and improving the chances of a deal passing.

The facility calls one side of the stadium built to hold 12,000 seats, along with amenities like suites and boxes. The other side, however, will be a temporary structure build to hold 8,000, with the idea of perhaps building a permanent structure down the road.

So we’re not talking about anything comparable to Winnipeg’s IG Field or Saskatchewan’s Mosaic Stadium.

Public costs for the project would be picked up by taxes on rental cars and hotel rooms (which are paid mostly by visitors) and by raising tax dollars through development around the facility.

The bottom line on these things tends to come down to what the public is being asked to pay, where those dollars are coming from and who will be on the hook if any projected funding sources don’t live up to projections.

Council has said they will need six months to go through everything, although Maritime Football Ltd. is hoping it takes less than that. If it takes substantially more, it could push the stadium into next October’s election cycle and no one wants to see it become a political football.

Of the 14 CFL players from 2018 who moved onto NFL off-season rosters during the winter, three are on active rosters, three are on practice rosters and eight have been set adrift.

The three on active rosters are Chargers punter Ty Long (formerly of B.C.), Denver receiver/returner Diontae Spencer (formerly of Ottawa and claimed after being put on waivers by the Pittsburgh Steelers) and Miami linebacker Samuel Eguavoen (formerly of Saskatchewan).

So what’s the lesson in all of this? Well, there’s a few. For the most part, NFL rosters are set before training camp begins, established largely by draft position and signing bonus money, which puts ex-CFL players on the outside looking in.

As in the cases of Williams and Singleton, players can play exceptionally well during preseason games and still not earn a roster spot. For most who make the move, the experience ends up costing them money by two months of practising for free in the NFL instead of getting paid to play in Canada.

None of that is to suggest players shouldn’t take their shot since the NFL minimum salary ($480,000 U.S.) dwarfs all but the top few salaries in Canada.

It’s interesting that the now-defunct Alliance of American Football had 49 players sign NFL contracts, with eight winding up on opening-week rosters and another nine on practice rosters, overshadowing the CFL’s contributions.

The reason? There could be several. For one, AAF players may be better suited to the NFL at some positions by virtue of playing the four-down game. Also, up until this coming off-season, only CFL players with expiring contracts were eligible to sign NFL deals and some would rather have the security in Canada than a lottery ticket at an NFL camp.

And, of course, although the CFL has nine teams and the AAF had eight, the NFL is rarely an option for players groomed at the U-Sports level.​